I’ve been watching a lot of offensive line prospects the past week, and it has me thinking. What types of players build the best possible offensive line?

Conventional wisdom holds that the offensive tackle is the most important position on the line. For most teams, the left tackle protects the quarterback’s blindside. Quarterback is the most important position, which validates the theory. In recent years it seems that thinking has changed among some evaluators. Yet, offensive tackles continue to go high in the draft—three in the top four last year.

Recently the center position has gained more attention. Ryan Kalil received a hefty deal from the Panthers, and the Pouncey brothers are next in line. The way the media covered the Alex Mack saga shows people believe the position is a key factor.

Despite the new and old theories propping up the left tackle and center positions, I think guards are the most important. There’s evidence to support the idea.

I’ve always admired the way New Orleans constructs their offensive line. They’ve always built from the inside out. The Saints had a dominant pair at guard in Jahri Evans and Carl Nicks when they won the Super Bowl. After Nicks left, they paired Evans with a very good player in Ben Grubbs.

Having such phenomenal talents has masked a number of issues on the Saints’ line over the years. Jermon Bushrod was seen as a Pro Bowler during his time in New Orleans, but is just a mediocre player. Zach Strief has been a mainstay, but couldn’t get a sniff in free agency this year.

The Saints have constantly rotated centers throughout Drew Brees’ years with the team. Jonathan Goodwin and Olin Kruetz were good, but were replaced by unknowns like Brian De La Puente. This offseason, the Saints let De La Puente walk, probably with the belief they can plug and play anyone there. 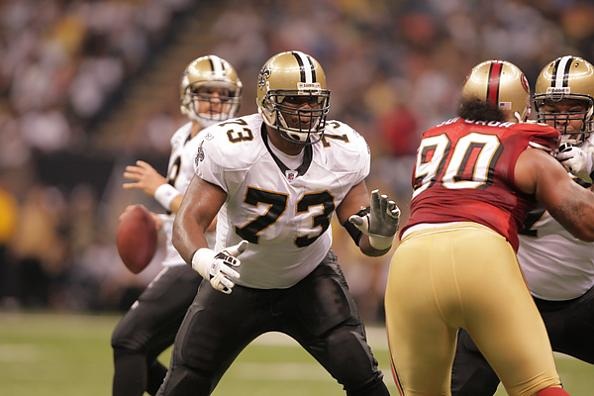 Jahri Evans' exceptional play has made the Saints' offensive line a strength for many years (Image: Icon Sports Media, Inc.)
Of course, having Brees around makes those linemen better, but don’t discount Evans’, Nicks’, and Grubbs’ role. Brees masks the tackles’ mistakes with his ability to maneuver the pocket and quick release. That’s all by design however, and it’s the guards that make it work.

The incredible pass protection skills those players possess—especially Evans—allows Brees the ability to feel comfortable stepping up in the pocket. He can easily slide and avoid edge pressure with the guard tandems he’s had.

This is especially pertinent in today’s NFL. Teams place more of an emphasis than ever in acquiring dominant interior pass rushers. We’ve seen how these players can elevate a defense. It’s inside pressure that disrupts quarterbacks the most. Edge pressure is so much easier to avoid, and keep proper throwing mechanics when it comes. Brees hardly has to worry about things with the way his organization builds their lines.

With dominant guards, the pass protection improves all over. You can leave a player like Evans on an island with an interior rusher and feel comfortable. They can also assist a center if he’s not up to snuff blocking a massive nose tackle in a 3-4. Same deal with a tackle and an outside speed rusher.

Elite guards also give you an advantage in run blocking. Players like Carl Nicks and Jahri Evans can play in a zone or power-man blocking scheme with success. You can’t overstate the importance of that. Inferior teams run on better defenses with greater success when they can mix up blocking schemes.

Having a dominant pair of guards just gives an offense so many different options. It helps out their other linemen, their running backs and most importantly their quarterback. As we get closer to the draft, it’s important to consider how this knowledge should affect team’s plans. Perhaps those in the top 10 picks should forego taking a tackle that high. Focusing resources elsewhere and beefing up the interior might be the wiser strategy.

My theory on guards is part of what leads me to have Xavier Su’a Filo as my 11th overall prospect.  His best attribute is his quickness and ability as a pass protector. Those could make him a dominant player at the next level. Su’a Filo could transform the offensive line of the team that drafts him.

Mike is one of the many people I really enjoy talking to on Twitter (@MikeKrupa). He’s always around to chat with late at night on Eastern Standard Time. That’s usually when I’m up ranting about whoever’s film I’m watching at the moment. Its nice to have guys from other time zones like Mike to bounce thoughts off of, instead of “hearing my own echo”.

The other night Mike tweeted out a link to his article on Walt Aikens—who attended Liberty University in Lynchburg, Virginia where I currently live. When I retweeted it, Mike asked me to give him feedback when I finished reading it. So, that’s what I’m doing here.

Mike put together an excellent evaluation on an underrated draft prospect I really like, in Aikens. He goes in-depth covering Aikens’ interesting back story, his potential and includes a few film clips. I won’t spoil it too much, but he really likes this player.

Aikens comes in as the 10th cornerback prospect on my board (to be released next week). He’s got some work to do, but there’s a lot to like. He’s a diverse player in coverage, and is a particularly good press corner. Big men the positon are the trend. Which is why evaluators are all over players like Keith McGill and Stanley Jean-Baptise. Walt Aikens trumps them both, in my eyes.

Check out Mike’s piece. You’ll see why Aikens is a sleeper and will reward the team that selects him in the mid-rounds.


What I’m Watching This Week

Since we just covered the importance of guards and I’m finishing their prospect rankings, let’s stay on topic. I’ve watched a lot of interior linemen this week, and none has impressed me more than Trai Turner.

There are some lapses in Turner’s play that show me why some don’t like him much. Yet, in my notes I always found myself following his negatives with a positive thought.

He sometimes gets driven back on first contact, but holds his ground and anchors well. He gets his upper body pushed around, but keeps a strong base. He does get beat with speed at first, but recovers and redirects defensive tackles well. 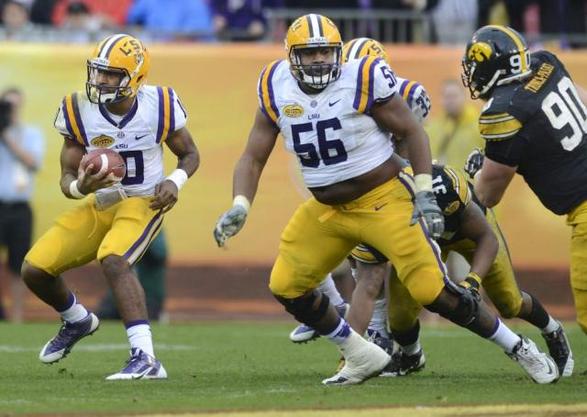 Trai Turner will make some team happy with his performance when they select him in May (Image: thesidelineview.com)
There are plenty of positives to get excited about with Turner as well. His 4.93 40-yard dash time shows up on film. He’s very quick on pulls, and has great movement out in space. Turner has the physical, nasty demeanor on such plays to compliment his athleticism.

I tend to downgrade interior linemen harshly if they don’t excel out on the second level. That’s where linemen are needed to assist in springing a running back on a big run, or screen pass. Luckily, that’s where Turner is at his best.

The LSU guard hustles down field, and keeps his head rotating in search for incoming defenders. He also has the awareness to know when he should peel off a lineman and hit a linebacker. Turner’s agility stands out when he’s operating on the second level.

After re-watching him, I bumped Turner into my top 75 prospects, replacing Gabe Jackson as the fourth ranked guard. I don’t like making changes this late in the game, but I felt Turner warranted the move. No other prospect has even come close to forcing my hand that way.

Turner should be selected in the third round of the draft. I’ve already discussed how guard is a pivotal position, and what makes Turner a good prospect. Best of all, he’s still quite young and entering the league as a redshirt sophomore. Turner still has plenty of room for growth. He’ll learn to correct his flaws and accentuate his strengths.

I took time to compile and post a Panthers’ specific mock draft this week at Draft Mecca. While discussing their first round pick I raised a point I’d like to elaborate on here. We can’t forget about Dave Gettleman’s preference for the best player available strategy.

We know by now that true BPA strategies are for the most part a myth. It’s more accurate to say teams abide by BPA at a position of need. Gettleman is unlikely to draft a linebacker at the 28th pick even if someone like Ryan Shazier is his best player remaining. However, it’s impossible to pigeonhole a position for Carolina at any round. They will not definitely take an offensive tackle or wide receiver, much less a specific player, with their first pick. It all depends on who is left on the board.

I think Morgan Moses is the best player for Carolina most likely to be available at their selection. But if Dave Gettleman disagrees with me, he won’t make the pick. If he prefers a guy like Cyrus Kouandijo, Ju’Wuan James or Joel Bitonio over Moses, he’ll take them. 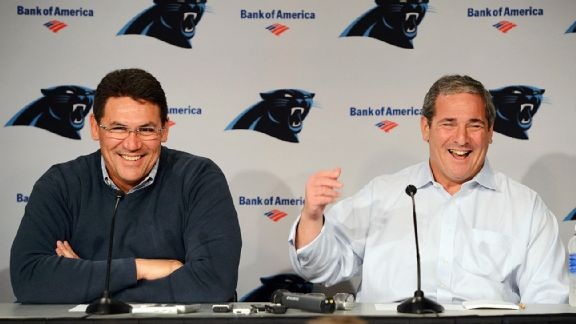 Dave Gettleman is laughing at anyone trying to predict what he will do with the Panthers' first round pick (Image: Getty Images)
Given the strength of the each position on the depth chart, and in the draft, it makes sense to take a tackle over a receiver at 28. Yet, if Gettleman loves Cody Latimer as much as it seems, he will take him over a tackle. If Kyle Fuller somehow slips to the Panthers’ pick, Gettleman might take the corner over either position. You also can’t rule out that he takes Jace Amaro (an idea I pounded the table for several months ago) if he sees the need. It all depends on the general manager’s board.

In many ways, Gettleman is still a wildcard. If there is one thing we know for sure about him, it’s that he plays by BPA at a position of need. He proved it to us last year. With so many holes on the roster not many expected Gettleman to select another defensive tackle after stealing Star Loutuleli. Yet he came back in the second round and took Kawann Short. Afterwards, the rookie general manager pointed out it was just too much value to pass up. A year later, it looks to be the right call.

If you’re like me and think Moses is the right call, or someone who wants a receiver like Brandin Cooks, don’t bother getting your hopes up. Gettleman will do things his way. It was only one draft, but he made what look like several good picks last year. He’s earned our trust so far.

This offseason showed that it’s always going to be a wild ride for Panthers’ fans with Dave Gettleman running the show. His pick in May very well might be an unpopular one. So prepare yourselves, and don’t put much weight in anyone’s predictions. Gettleman will do what he believes is best and provides optimal value, whether you like it not.
Widget is loading comments...
Powered by