Reception Perception: Devin Smith and the Value of a Trump Card (FBG) 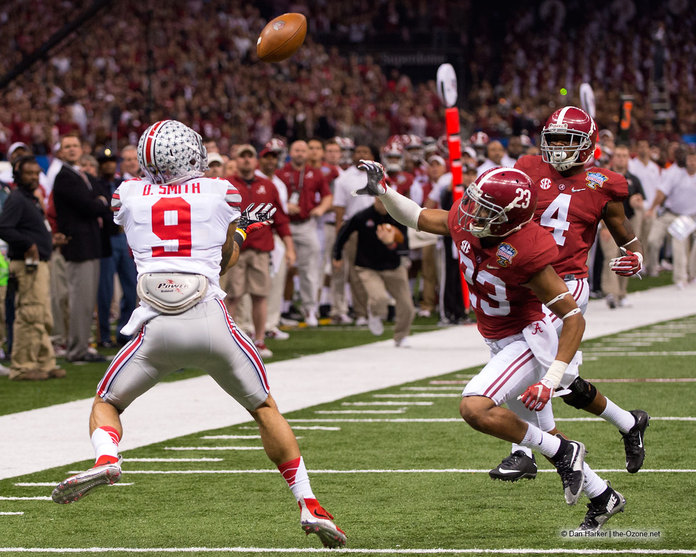 Devin Smith, already a tantalizing deep threat, shows flashes of being a complete player (Image: Dan Harker).
Ohio State was the best team in college football this season. Now that we have a true playoff system to award a National Championship, we can finally say that in earnest. The influence of a surprising third-string quarterback, Cardale Jones, and a stud sophomore running back, Ezekiel Elliot, were the main catalysts in propelling OSU to the top of the NCAA ranks. However, it would be foolish to discount the efforts of another offensive player, wide receiver Devin Smith.

Buckeyes fans were used the senior wideout making dynamic plays and catching long touchdowns. NFL draft analysts and enthusiasts were not nearly as prepared when big media members began slotting Devin Smith into the first round of mock drafts. The consensus opinion had him pegged as a day three prospect heading into his senior season. So, he was naturally pegged as a classic “late riser”; a player that was being overrated based on his team’s success and his balky yards per catch figure. We’ve seen that story told before, and the uninspiring results that usually follow.

Many times in life, our first instinct is to reject the unexpected. As the most developed species on the planet, we’ve grown to believe that what we’ve planned in our own little worlds is what should come to fruition. This certainly pertains to a macro and societal level, but it can also seep into the very micro and niche areas, such as draft analysis. Many times our hubris makes us inflexible, and we miss out on opportunities for growth and knowledge in our pursuits. No one is exempt from this; we’ve all been there.

Perhaps in this case, the draft community missed something all along with Devin Smith. Were there are flashes and indications hidden in perceived long absences between the occasional long receptions? Regardless, is the value that his deep ball ability brings to an NFL offense enough to justify his ascension to a potential first round selection? These are among the questions that Reception Perception attempts to answer.

Disclaimer: usually a full season profile of Reception Perception works through eight games of a receiver. Unfortunately, with the scarcity of all-22 footage available on college prospects, that was not possible. For the purposes of this profile, we’ll be working strictly off Devin Smith’s 2014 games against Michigan State, Illinois, Penn State, Virginia Tech and Minnesota.

Devin Smith made a big impact on his college team. However, he was not a featured player in their offense. In this five game sample, Smith played 151 snaps. He averaged just over 30 snaps per game. It seems odd that a player who is now a projected early round pick was not even a regular on his college teams offense. We’ll table that conundrum for now, and revisit it later on when exploring other aspects of Smith’s Reception Perception data.

When he was on the field, Smith was usually lined up as an outside receiver. Ohio State liked to get him against one-on-one matchups, where he could use his speed to his advantage. He did get some reps in the slot, and is just as deadly tearing through the seams, as he is the boundary. The Buckeyes also played him on the line of scrimmage for 64.2% of his snaps from this five game sample. That indicates that the coaching staff was comfortable with Smith facing tight physical coverage.

In the NFL, Devin Smith is a strong bet to move around the formation. His professional team will want to locate the best matchups for him to exploit.