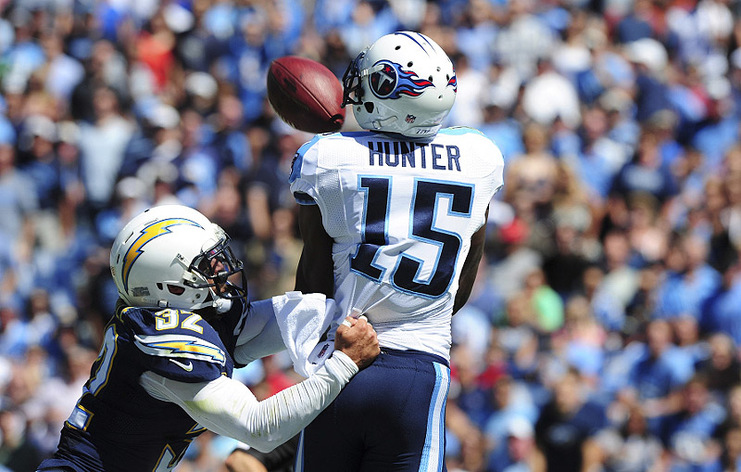 Justin Hunter's slow start to his career should mean he'll come cheap in dynasty leagues this offseason (Image: USA Today).
My college roommate and I loved the zombie movement, or more accurately, he was all about it when we met and opened my eyes. Video games depicting a word dominated by risen corpses, and television shows like The Walking Dead were mainstays throughout the four years we lived together. In addition to the gruesome and thrilling nature of a zombie apocalypse, something about the morphing of right, wrong and the way human beings interacted in the event appealed to us.

There were more than a few late nights we would dig through the discount movie bins at the local Wal-Mart, looking for cheap zombie films. Much to the chagrin of anyone accompanying us on a would-be standard shopping run, our obsession knew no limits. Wal-Mart would frequently indulge us. On more than one occasion, we walked away with a bundle of four movies for a measly $5.

Of course, we’d always watch the movies and end up disappointed—if we even finished them at all. We quickly learned that trusting any zombie film to deliver was sketchy business. Perhaps we were just snobbish self-proclaimed aficionados on the genre, as well. Either way, these experiences also taught us a lesson that applies to more than just scraping bargain sections for cheap apocalyptic entertainment. Sometimes, things are in the clearance bins for a reason.

In the same way, many within the dynasty fantasy community are always on the lookout for the next steal. Owners playing in this format have no boundaries when it comes to tearing through discounts. My Footballguys colleague, Jeff Tefertiller, will tell you his favorite buy-lows are young wide receivers in line to receive an upgrade at quarterback. One player who theoretically fits that mold is Justin Hunter of the Tennessee Titans.

The Titans quarterback play has been unsteady, at best, the last several years. Jake Locker never panned out, and was in and out of the lineup due to a number of injuries. This forced Tennessee to turn to veterans like Ryan Fitzpatrick and Charlie Whitehurst, from whom they predictably received unsatisfactory play. In their latest effort, the team turned to a rookie taken in the sixth-round of the draft, in Zach Mettenberger. He flashed occasionally, and the organization is reportedly high on him, and betting he’s the 2015 starter. I’ve never been a big fan, and am not so sure he deserves that sort of praise, but the big-armed passer still may be an upgrade over what the Titans have seen lately.

Even if Mettenberger takes just a small step forward, or if the Titans reverse course and take a rookie at the second overall pick, Tennessee should be better behind center this season. Which brings us back to Justin Hunter. The former University of Tennessee star came to the NFL with a ton of fanfare, even drawing comparisons to Randy Moss and A.J. Green from a few analysts. After 46 catches and 852 yards through two seasons, its fair to say the results have been middling. The question is whether the quarterback situation was truly to blame, or if Hunter has more of the problem. We’ll take a look at his game, through the lens of Reception Perception, to answer that query. 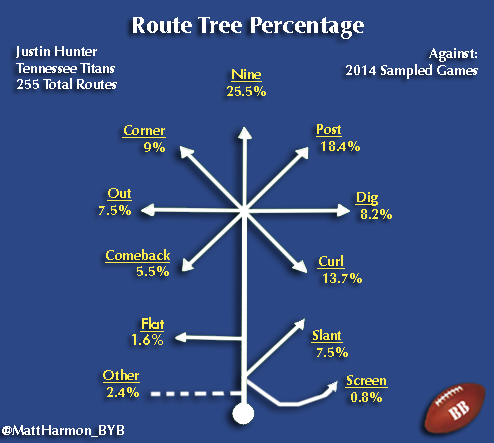 Hunter’s primary usage by the Tennessee Titans is as a big play threat. Of the 255 routes charted from Hunter’s eight game Reception Perception sample, 25.5% of them were nine-routes. That figure comes in at a higher rate than one of a well-known speedster, new Vikings receiver Mike Wallace. 52.9% of the routes Hunter ran in this sample were deep patterns, when you include corners and posts.

Hunter’s size (6’4 and 203 pounds) and speed (4.44 in the 40-yard dash at the 2013 scouting combine), would lead you to believe he can be a terror down the field. Those dimensions are part of what brought such lofty player comparisons upon Hunter. The Titans clearly bought into that notion. Hunter was a full time player for the team this year, but his Route Percentage Chart indicates he was pigeon holed into a certain role. Unfortunately, he was not very efficient in said role: 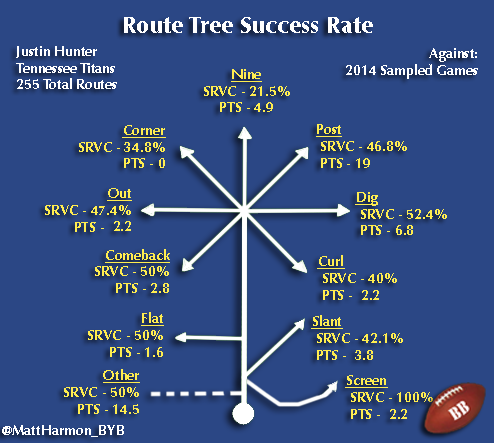 (SRVC denotes success rate versus coverage for each route. PTS indicates how many PPR fantasy points a receiver earned on each particular route)
Considering he ran a vertical pattern on over a quarter of the routes from this sample, Hunter’s 21.5% SRVC on nine-routes is unacceptable. This represents a disconnect between an assigned role, and the player’s capabilities. While Hunter came into the league with an impressive physical profile, he also came in with a torn ACL on his resume. It’s clear when watching him play at the NFL level, that injury took a toll on this once carved from stone specimen. At this point in his playing career, Hunter looks more slow and lumbering, than he does a smooth operator. There were very few plays where he went streaking past defenders on the sideline. It was striking how infrequently Hunter earned separation form coverage players in the deep game.

While it appears he’s not suited for a deep game role at this point, none of his other SRVC scores indicate he can thrive elsewhere. Hunter only scored above the current NFL average SRVC on screen routes. Every other figure was below what most of his peers record. He lacks the technique to separate, and his route proficiency is poor.

No matter what the coverage assigned against him, Justin Hunter rarely has an answer:

(Red indicates this figure is below the current average recorded for Reception Perception)
Far more often than not, Hunter does not get open to present a reasonable target for his quarterback. While he’ll occasionally turn a corner around at the line, his release technique is wildly inconsistent, which is represented in his poor SRVC against press. Even if he earns the advantage off the line, he displays little to no route subtleties or nuances to get loose from one-on-one coverage—only 31.9% SRVC against man defense. Even zone defenses trip Hunter up, as his score fell nearly 30-percentage points below the NFL average.

In some instances, big receivers can get away with suboptimal separation skills, due to the capability to dominate in contested situations. Dwayne Bowe’s 70.6% contested catch conversion rate helped ease concerns about his below-average 52.6% SRVC against man. Justin Hunter does not have that same trump card in his arsenal. He went up for 15 contested catches during this sample, but only converted 26.7% of them. This is another figure far below the NFL average. Even if Hunter was better in contested situations, his SRVC scores are so low it would be hard to overlook them. Players who separate from coverage are much more valuable, and will be fed the football one a regular basis more often, than those who win passes in traffic.

When I sat down to run through Justin Hunter’s Reception Perception sample, I expected to see flashes of brilliance, with the many low moments sprinkled in. What was unexpected was Hunter scoring as one of the worst receivers charted so far. While it’s still early in his NFL career, and his situation has not been the best, his Reception Perception statistics (particularly his SRVC data) were on the lowest of low ends. A turnaround to even developing into a passable regular NFL starter would be quite the feat.

Due to a disappointing first couple of seasons, Justin Hunter should come at a discount in the majority of dynasty leagues. Just remember, if you’re looking to buy him, he’s in the clearance bin for a reason. As my college roommate and I once learned, just because the zombie films in the discount packs were cheap, didn’t mean they would provide us with acceptable entertainment. In a similar fashion, just because you acquire Justin Hunter on the cheap, does not mean he’ll ever bring you passable value.

Are you interested in learning more about Reception Perception, and seeing more players’ data? Be sure to become familiar with the upcoming publication, where nearly every relevant NFL receiver will be profiled, and follow the #ReceptionPerception hashtag on Twitter to keep up with all future featured receivers (including draft prospects).
Comment Form is loading comments...
Powered by