Reception Perception: Steve Johnson is the Surest Sleeper Around 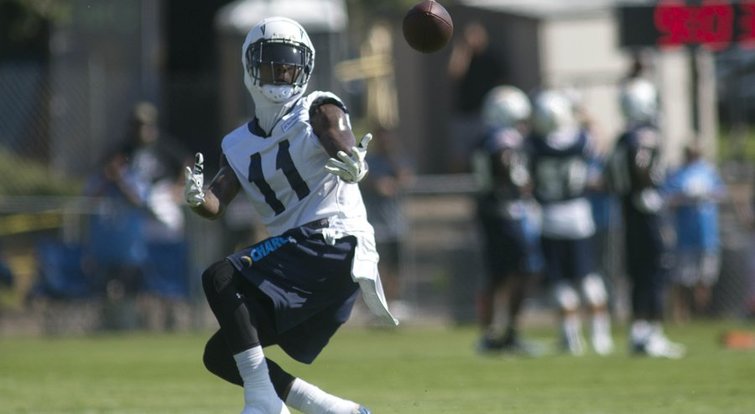 Steve Johnson is primed to revive his career with the Chargers and the best quarterback he's ever played with (Image: Michael Cali)
I won’t bury the lede here; Stevie Johnson was one of the best under the radar acquisitions in free agency. The veteran receiver is poised for a nice bounce back year in San Diego after starting just one game for the 49ers last season. Much like former teammate Michael Crabtree, Johnson was the victim of a quarterback who failed to utilize good route running receivers, or develop chemistry with multiple weapons. Moving to a Philip Rivers led offense in San Diego was a near perfect choice for a career revival.

Not impressed with this take, now that Evan Silva and others in the fantasy community have been pumping up his stock? I know; I slacked off on delivering this one to you. If only I had actually gotten around to writing this article over 140 days ago at the conclusion of his Reception Perception charting…

In fairness, when we learned of Antonio Gates’ four-game suspension, I once again tried to dust off this post.

Stevie Johnson is a #ReceptionPerception favorite, and sleeper I target in MFL10s. I feel an article coming...

Red indicates the figure is below the NFL average, Green is above and Yellow is within one percentage point.
One attribute that the Chargers will certainly enjoy with Stevie Johnson in the fold is the veteran’s ability to play all three-receiver spots. The player he is replacing, and commonly compared to, Eddie Royal, was strictly a slot asset in the San Diego passing game. Royal’s quickness helps him get free from coverage underneath, but he is not a consistent down field threat, and lacks the physicality to succeed outside.

Johnson can play in Royal’s departed slot spot. 31.6 percent of the snaps over his 2014 Reception Perception sample came from that position. However, Johnson could begin to siphon snaps from long-time, and soon to be retired, Charger Malcolm Floyd. Johnson split snaps on the outside and inside fairly evenly. He could also help Keenan Allen out by taking some reps at flanker, which would allow the latter to slide inside. The two receivers have similar skill sets; one that Rivers enjoys throwing to. Rivers’ rate of producing 1,000-yard receivers is lower than you would imagine from a long-entrenched elite passer. He likes to spread the ball around. Do not rule out a scenario where Johnson, if the relationship forms and progresses, checks in with a target rate rather close to Allen’s than we expect, comes season’s end.

Naturally, this is the area where Stevie Johnson falls short. He was targeted on, a below NFL average rate, 23.5 percent of the 170 routes from his Reception Perception sample. The San Francisco passing offense was incredibly unstable. Michael Crabtree and Vernon Davis floundered, while only Anquan Boldin remained afloat. There was never a chance for Johnson to get enough looks as the third receiver.

While not the most efficient receiver (56.9 percent catch rate for his career) Johnson is still no liability. He finished right within the league average, catching a pass on 15.9 percent of the routes he ran. Johnson presented a good target for his quarterback, but the relationship never truly developed.

Overly-rigid scouts may not find Johnson an appealing watch. There is a bit of an unruly nature to his play. This was reflected in his league average drop rate, failing to secure five percent of his targets in the sample. However, as you will see, Johnson gets the job done despite a style of play that a textbook lover some may not be able to digest smoothly.