Reception Perception: Why there will never be a cumulative or overall grade 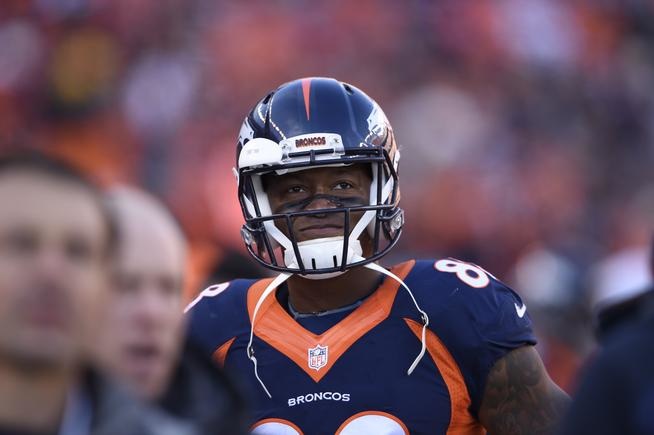 Demaryius Thomas is the perfect example of a player who would suffer from an overall Reception Perception grade (Image: Joe Amon, The Denver Post)
I’d like to first start out this piece with a disclaimer. If any of my peers in the industry feel “called out” by any thought I share here, please understand I’m not doing that. This article merely details the thoughts I have on grades and cumulative metrics based on my own process. If you do work that you feel falls under the umbrella of what I’m speaking out against here, that is more than fine. It is your work, not mine, just as Reception Perception is mine alone. The following thoughts apply to how I feel about the direction of my process. You all continue killing it in your own lane, and know I want nothing less for you.

I understand why readers and consumers like rankings. Not only is a numerical ascending or descending list easy to understand, it makes for impassioned debates about the placement of each player. In the consumption of content centering around a recreational activity, no one should be surprised when a reader prefers their end of the bargain come with less perceived work.

Reception Perception presents each individual metric in a simple percentage point, and most are named in a self-explanatory fashion. I like to believe the methodology does a good job of taking the complicated qualitative art of evaluating a receiver’s performance on each route and making the results easy to digest with simple analytics.

However, there is no doubt Reception Perception takes a small dose of effort on the reader’s part to completely comprehend. Better yet, the onus falls on me as the purveyor of the methodology to communicate and interpret what the results say, and their application.

Of course, there’s a way to make this easier on all parties involved. Take all of the individual metrics in Reception Perception and combine them into one cumulative or overall grade. Such practice can make interpreting my findings a bit easier.

“Odell Beckham’s Reception Perception grade is higher than Julio Jones’, so he must be better.”

“Julian Edelman fell outside the top-25 overall graded Reception Perception receivers, he must be overrated.”

“Corey Coleman’s overall Reception Perception score was 5.6 percentage points higher than Laqoun Treadwell’s, so he is the superior NFL prospect.”

Such statements would make for attention-grabbing headlines, debate starters and perhaps even draw in a larger set of clicks for the series. An overall grade would accomplish all of that, and it is an idea readers have suggested for Reception Perception before.

Comment posted at the end of the Reception Perception results for college draft prospects.
I understand the sentiment from my man, Roy, here. I really do. I’m absolutely sure there is a way, perhaps even a formula to create, that would accumulate all of Reception Perception’s metrics into an overall score. And I can certainly sympathize with wanting that overall grade after seeing the enormity of information presented in the full results for the NFL Draft prospects.

However, I can promise you, as long as the series is under my control, there will never be any sort of cumulative overall grade in Reception Perception.

Most prominently, I believe an overall grade would take away from the true objective Reception Perception looks to accomplish. Comparing wide receivers in a one-to-one fashion is rather frivolous, and can be quite unfair. The potential assignments doled out to a player at the position, and where they may or may not be effective are so wide-range and diverse. With Reception Perception’s individual metrics, we can best break down and assess the areas where they are most successful. The methodology helps embody the Josh Norris “where they win” mantra.

Looking at a receiver’s Success Rate Vs. Coverage scores on their nine, post and corner routes helps quantify their functionality in the downfield game. If a receiver has a poor SRVC against man, but is a top-tier scorer in contested catch conversion rate, perhaps we aren't so concerned with his possible struggles to separate. A player scores well on underneath patterns and after the catch, then his best position longterm might be the slot.

The beauty of Reception Perception lies in the way it dissects and separates each aspect of what goes into playing the position. Comparing a Wes Welker to a Calvin Johnson is almost pointless. Instead, this methodology quantifies what their team assigns them and then analyzes how well they execute in that role. The simple percentage-based metrics gives us a clear, quantified picture of what the receiver is good at and how they play the game.

An overall grade would take away from all of that. Instead of separating their abilities into dissectible factions to assess their strengths and weaknesses, we’d be back to comparing players on a one-to-one basis surrounding one number. In that end, the point of the series would be lost.

Additionally, in order to create an overall grade, there would need to be a hard set in stone formula to combine all the existing metrics. I can’t even begin to think of how that would work, or even why it would be effective.

Lets walk through one example. I thoroughly believe that the best indicator for longterm success at the wide receiver position is consistent route-to-route execution, especially against man and press coverage. In a theoretical master grade, I’d probably weigh that heavier than all the other metrics. However, a lack of success against man coverage is not the same for every player.

Demaryius Thomas always scores below the NFL average in success rate versus man coverage. Tyler Boyd held the second lowest success rate versus man coverage among the 21 draft prospects I charted this season. Yet, I’m far less worried about Thomas’ poor score here than Boyd’s. Thomas is an elite athlete, and checks out extremely well in Reception Perception’s “in space”, tackle-breaking metric. Boyd tested as, at best, an average athlete at the NFL combine, and was brought down on first contact on 77.8 percent of his in space attempts.

Both players would sink down the overall Reception Perception grade rankings. It would only be justified in one case. Demaryius Thomas is the perfect example of a player who would suffer from an overall Reception Perception grade, but looking through each individual metric in conjunction shows that he still a damn good player, he just wins in incredibly specific ways.

There’s beauty in subjectivity, in analysis made through careful interpretation of data presented. It seems there’s a sector of the football community that only desires objective information. However, defining content or a process as objective does not make it is always right, nor does it mean it matters. As a side note, there are few things in this world I don’t view as subjective. However I decided to put together this grading formula would still be as subjective as any Reception Perception based is now. Just because you put a number to some convoluted concept doesn't give it validity.

I also don’t care for the idea of a process that isn’t clear. “this receiver is a really good route runner, so I’ll give him a 7.5/10 grade here.” Okay, but what does any of that mean? How’d you get there? What road did you travel? The tails of the journey are just as important as the destination.

In my opinion, Reception Perception is pretty straight forward. All the numbers might look intimidating at first, but at the end of the day, it’s as simple as “did he do this or did he not?” My process is spelled out for anyone to see, I’m not hiding any secrets here. There’s no special sauce lathering the food that I can’t divulge the ingredients to. It’s the same meal of analysis you’re used to eating, you’ve seen it before, I just believe I’ve prepared it for you in a better fashion than any has before.

Reception Perception is me showing my work in totality. Every piece of charting I do when I’m watching a receiver, you see it play out in the final numbers presented. Nothing goes through a filter, a formula or is altered in any way. The hypothetical final grade would take away that purity, and convolute my process.

Again, it’s more work for the readers, but I believe there is more value in you reading my thoughts on the data I chart and then engaging in a discussion with me about them, as opposed to just checking which player graded out better than the other.

This brings me to my final point on why I detest the idea of a Reception Perception grade. To me, it would feel like a form of talking down to my audience. There is nothing that bothers me in this industry more than the implicit or explicit feeling that someone believes you need to dumb your content in order to have it better fit the consumer.

We’re talking about football, it’s a game. There’s little you can do to talk over someone’s head about this. No matter how in-depth the concept, it’s still just football. We are not reading ancient hieroglyphics of long lost civilizations past. The reader can understand any information you present, as long as the writer does the explanation of it justice. The football audience wants information, whether it is to get an edge for the fantasy team or just to be the smartest guy at the end of the bar, the hunger is greater than ever.

Sure, a Reception Perception overall grade would make for easier spoon-feeding type content. But I don’t believe, and I never will, that my audience needs that. Taking in the information at all levels through every metric gives you the full picture of a wide receiver’s game. You learn more about the player that way. An overall grade might save you a little time, but you would also sacrifice the goodness the methodology has to offer in the process. That’s not how readers are treated on this site.

Reception Perception is committed to providing the best, full-scale analysis on wide receivers. The hours of work that go into collecting the data, interpreting the results and conveying them to the audience is all for providing unique information that you won’t find anywhere else.

An overall grade doesn't provide any of that. It convolutes the results of a strict process and cheapens the nuance of the series. None of that is me, and that’s why you will never see an overall grade attached to Reception Perception. ​
Comment Form is loading comments...
Powered by