Reception Perception: Why we must Consider the Entire Range of Outcomes for Sammy Watkins 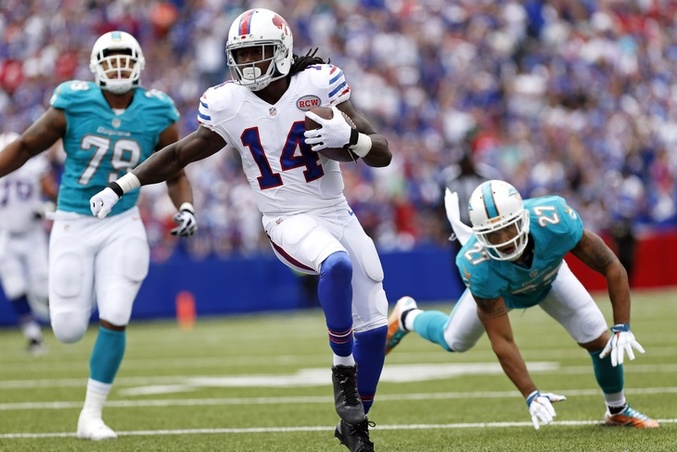 Sammy Watkins made some big plays as a rookie, but Reception Perception demands we examine his rookie season closer (Image: Kevin Hoffman/US Presswire)
When a player enters the league with great fanfare, and with a pedigree that causes analysts to almost universally agree he’ll succeed, it often takes several years to alter the discourse. Our original conclusions on them as college prospects can create a blind optimism, even if the evidence begins to indicate a shift in the tide. While writing off a player too early is just as foolish as succumbing to that blind optimism, we must put a premium on the information presented on their NFL game tape.

One such player who fits this mold, and whose rookie season illuminated some warning signs that are largely glossed over, is Sammy Watkins. The former Clemson star was mostly the consensus top receiver in what was widely regarded as a stacked draft class. There were some dissenting voices, but the conversation regarding Watkins’ NFL outlook was overwhelmingly positive. I was among that sector; listing him as the third best prospect from the 2014 class overall. As such, I joined the collective groan in the wake of Watkins’ landing spot.

When the Buffalo Bills traded up for Sammy Watkins, sacrificing a future first round pick, their quarterback situation was murky. Now over a year later, there is even less clarity. E.J. Manuel was benched faster than many young first round quarterbacks, and Matt Cassel inspires little confidence he will be an upgrade over what the team got from Kyle Orton in 2014. Rumors indicate that the Bills are so desperate that they will give Tyrod Taylor a serious look. Couple the mess behind center with the hiring of Rex Ryan, a coach known for his ignorance of the offensive side of the ball, and Watkins’ fans must be worried. It’s hard to imagine a situation worse for a talented wide receiver to bloom.

All of the factors listed above are legitimate reasons to worry over Sammy Watkins’ future production. Yet, there is a school of thought that a talented wide receiver who mixes in technical skill will usually succeed despite poor play behind center. After all, look at what Andre Johnson accomplished for years with a laundry list of subpar quarterbacks. A.J. Green is still considered one of the best receivers in the game, and it looks as if he is strapped to Andy Dalton for life. Common thought is that the fourth overall pick of the 2014 NFL Draft will be the next in that lineage.

While that could very well be true, to say without a doubt that Watkins’ will reach the potential ceiling he brought into the league is still a leap of faith. Yes, he battled through injuries to post a solid rookie stat line. All the obstacles provide his supporters with every excuse in the book to wave off concerns.

However, what does not get talked about enough is that the receiver who was considered head and shoulders above all the others in the legendary 2014 class did not perform with down-to-down consistent good play as a rookie. When looking over his Reception Perception data, especially compared to his peers, it’s hard to not be alarmed.

When Sammy Watkins came into the league, some evaluators were unsure exactly what type of receiver he would be. There was concern over whether his size (6’1, 211 pounds), with good but not great timed speed (4.43 in the 40-yard dash) combination would hinder his ability to thrive as an every down X-receiver. The Bills disagreed with those notions, and that was the primary spot he played as a rookie.

Red indicates the figure is below the NFL average, Green is above and Yellow is within one percentage point.
Over Watkins’ Reception Perception sample, he was on the outside for 93.6% of his snaps. 79% of them saw Watkins with his foot on the line of scrimmage. He spent little time in the slot, or at the flanker (Z-receiver) position.

One of the key components to keep in mind when analyzing Watkins’ rookie season, is that the Bills essentially asked him to be their number-one offensive threat from the very beginning. He played as the split-end, led the team in targets and frequently did battle with the opposition’s top cornerback.

Sammy Watkins was a highly regarded college prospect, but that is still an awfully heavy weight for a rookie to shoulder. Especially given that the Bills cycled substandard quarterbacks last season, and were a middling offense, at best. In some cases, first year receivers can be the primary option for a pristine passing game. However, those instances usually occur in environments more stable than the one Buffalo provided Watkins with in 2014.

As mentioned, the Bills essentially deemed Sammy Watkins their number one receiver the moment he walked into the building. Not surprisingly, his season-long target totals were impressive. However, it is also worth pointing out there were stretches where his involvement in the office waned, as quantified by his “target per route rate”.

Watkins ran 297 qualifying routes over his Reception Perception sample, and was targeted on 24.2% of them. This hovered just under the charted average for NFL receivers. While we do not have to worry about Watkins’ future involvement with the offense, his target-per-route rate does speak to some issues form his rookie season. There were some weeks where the fourth overall pick only saw three to six targets go his way; several of which crept into his Reception Perception sample.

The reason for the disparity in his targets is best outlined in a three-pronged answer.