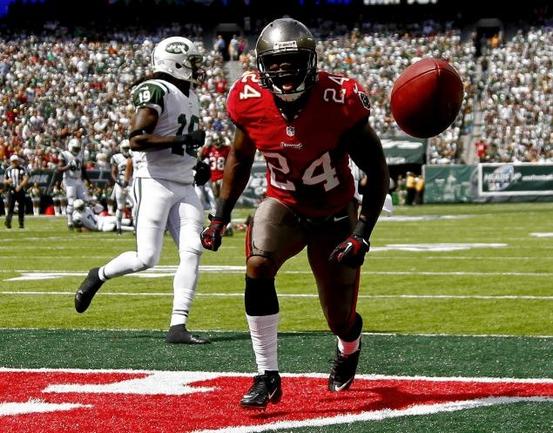 The Patriots acquired the greatest schematic advantage of all by scooping up Darrelle Revis (Image: nydailynews.com)
By: Matt Harmon
March 14, 2014


How he fits with the Patriots:

There are a few organizations that always struggle hitting on a particular position in the draft. The Patriots have that trouble with the defensive backfield. If your own players aren’t working out, it’s nice when you’re able to bring in one of the best to ever do it.

Contrary to some reports, Darrelle Revis is far from a declining asset. In fact, when used correctly, there isn’t a greater asset in the NFL than Darrelle Revis.

Last season the all-world cornerback was rehabbing from an ACL tear and still had a great season. Early in 2013, Greg Schiano and the Bucs inadvisably used Revis as a zone cornerback. Whether it was to protect him from re-injury, or just bad coaching, it was a waste of his talents.

As the season went along, the Bucs gradually assigned Revis more man coverage. The former All-Pro shined, and showed he still had all the skills that made him so special as a New York Jet.

The Patriots and Bill Belichick have wanted a defense based in man coverage for many years. Now they have the ultimate cover corner. The Patriots will bring Revis in as a shadow for the opposition’s number one wideout. He will be back at home in the Patriots’ scheme.

When you have Revis, your team can legally cheat. Defensive coordinators can play ten on ten, with one half of the field erased. You can drop an eighth man into the box without hesitation, or send an extra player to rush the passer.

The Patriots will likely deploy many cover three looks on defense now. Revis will take away the opposing number one; newly signed Brandon Browner will take the other side, while Logan Ryan and Alfonzo Dennard rotate in. In this set up, stud safety, Devin McCourty, will roam the deep middle. He will be more of a playmaker then ever.

By signing Revis, the Patriots acquired the ultimate defensive chess piece. He is a transcendent talent, and makes your entire defense better.


What he leaves behind with the Buccaneers:

When Lovie Smith came aboard as the Bucs new head coach, he committed to running his own scheme. Despite having a legendary man-to-man corner, Smith decided running his cover two scheme was best.

In one sense, the Buccaneers were smart in getting rid of Darrelle Revis.

He would have been used incorrectly, and wasted, in a cover two defensive scheme. There was no point in pay $16 million per year while putting a square peg in a round hole. Lovie Smith is building a solid group of defenders for his ideal defense without Revis.

However, the Bucs are not better for making this move.

Great coaches, and smart organizations, mold their schemes to fit their talent. It’s not a good sign that the first move this new Bucs regime made was in contrast of that, and forced them to release their best asset. When you have a player of Revis’ caliber, you pay them; it’s that simple. With the salary cap rising, his contract wasn’t even that outrageous.

As mentioned, Revis is an incredibly unique talent, a game changer, and a special player. The Bucs no longer have that on the roster, and therefore, they are a lesser team than they were a week ago.

The Buccaneers gave up their first round pick, $16 million dollars, and valuable time to waste Revis for a year, only to cut him with no compensation. It was a horrific trade for the Bucs, and oddly enough, it wasn’t about player performance.

Hello. RT @TomPelissero: Darrelle Revis' deal with #Patriots includes an option for 2015 at $20M, including a $12 roster bonus.

For a guy who is always slandered as just being out for the money, Darrelle Revis didn’t sign an outrageous deal.

The original one-year, $12 million dollar contract is very indicative of where Revis’ value is. He is, at worst, a top two cornerback in the NFL, and is paid as such. The Patriots have an option for a second year, but would pay him $20 million if they pick it up. In all likelihood, that never comes into effect.

The Patriots can use the option if they cannot negotiate a long-term deal with Revis. However, they will work hard throughout the 2014 season to make sure that happens—provided Revis performs to his standards. The second year is essentially a compromise that will assure the player avoids the franchise tag.

Darrelle Revis steps in and makes the Patriots one of the most dangerous defenses in the NFL. In 2014 he will be further removed from his ACL injury, and closer to the player he was in New York. Revis will provide a massive schematic advantage, in favor of the New England.

Of course, we know Revis’ impact won’t show up in his stat sheet; the game tape will tell that story. However, expect his teammates to all see a pump in their production.

Observers will view McCourty in an even higher regard, the other corners will have more playmaking chances, and lineman will see a spike in their sack totals. The Patriots need only add some interior pass rushers, and their defense will be complete.

Revis might be on the downside of his Hall of Fame career, but he still has several good years for the New England Patriots. Belichick and company made a phenomenal acquisition, and the rest of the league should be furious Tampa Bay facilitated it.
Widget is loading comments...
Powered by