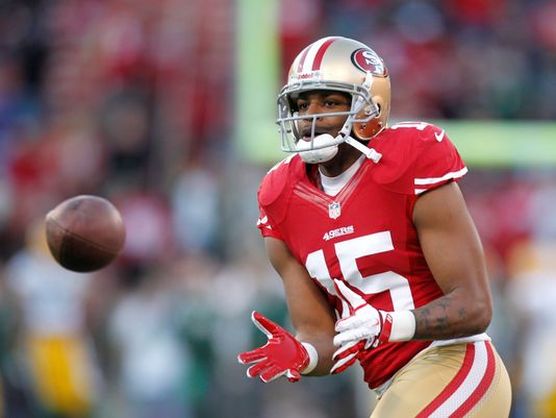 Despite a lackluster contract year, Michael Crabtree can still provide a boost to a team as a free agent signing (Photo: Cary Edmondson, USA TODAY Sports)
Rewind to the 2009 NFL Draft. A year of top-10 picks that once seemed so promising is now looked back on with disappointment. Only four of those ten players were still with their original team during the 2014 season. There were two quarterbacks—a first team flameout in Mark Sanchez, and a player who has finally been exposed as subpar, in Matthew Stafford. Even the two picks that were billed as safe hits, Jason Smith and Aaron Curry, have washed out of the league entirely.

Leading up to that draft, there was one top-10 prospect that was billed as both safe and exciting. That prospect, Michael Crabtree, eventually fell to the tenth pick. Crabtree was a prolific college receiver, and many saw it as laughable when the Raiders selected his peer, Darius Heyward-Bey, over him. The belief was that the 49ers, Oakland’s bay area rival, and their newest pass catcher would make Al Davis and company regret that pick for years to come.

Despite all the promise, to this point, Crabtree’s NFL career can mostly be described as a “failure to launch” or at least “stay in the air consistently”. Things got off to a slow start, with a lengthy rookie contract hold out. The following years were not much easier, as Crabtree was forced to deal with mediocre to poor quarterback play in San Francisco. It was not until the 2012 season that we were able to see the player that many evaluators compared to Larry Fitzgerald, leading up to that 2009 draft.

Michael Crabtree took off with Colin Kaepernick at the head of the offense. The still young wideout did not hide his feelings of glee that he was now catching passes from an ultra-talented quarterback, rather than Alex Smith (whom he never clicked with). Crabtree played a full season, and recorded 85 catches 1,105 yards and scored nine times; all still career best numbers. It seemed Crabtree was now poised to join the elite ranks of wide receivers in the NFL.

Unfortunately, it did not last. Crabtree tore an Achilles tendon during the 2013 offseason, and he struggled to regain form while playing in only five games. The 49ers also traded for Anquan Boldin that year, and Kaepernick began to lock onto him over his once favorite weapon in Crabtree. 2014 was just as disappointing for Michael Crabtree.

Now, Crabtree finds himself ready to enter unrestricted free agency. With the departure of Jim Harbaugh and the clear lack of progression from Kaepernick, he appears in no rush to stick around. Crabtree recently removed “Now a 49er” from his Twitter account. The signs appear pointed towards Crabtree moving on to a new team come March.

Depending on that future landing spot, Michael Crabtree could be poised to have a much more productive second half of his NFL career, than first. Despite having the worst statistical full season of his career, Crabtree remains a good NFL wide receiver. Some of the numbers from his 2014 eight-game Reception Perception sample may surprise you:

Given his lack of raw production, you’d believe 2014 was a down season for Michael Crabtree. Diving into his Success Rate Versus Coverage scores, it appears the fault may not be at his feet. Especially in light of the lackluster SRVC scores amassed by Sammy Watkins that we just studied in a prior Reception Perception blog post, Crabtree’s numbers look quite solid. He maintained a, what would be qualified as, good success rate against man coverage (70%), and a relatively solid rate against zones (78.7%). He still gains an acceptable release from the line of scrimmage (74.2% SRVC against press), but it is clear that a long injury history has taken a slight toll on his quick-twitch initial movements. 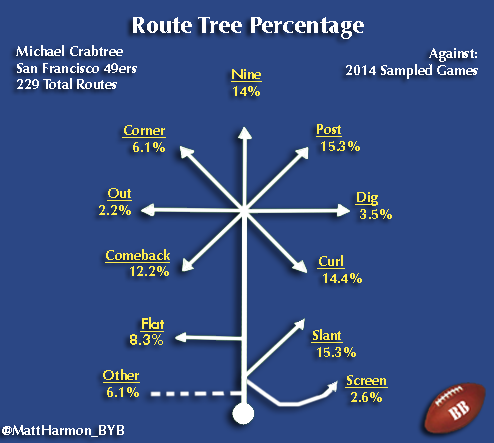 Crabtree presents a fairly straightforward route tree. 60.3% of Crabtree’s routes, from this eight game sample, were of the in-breaking variety. Greg Roman and the 49ers often called up slants, curls and posts for their former top-10 pick. The other routes prominently represented are the out (12.2%) and nine routes (14%).

Let’s examine how he performed on a per route basis: 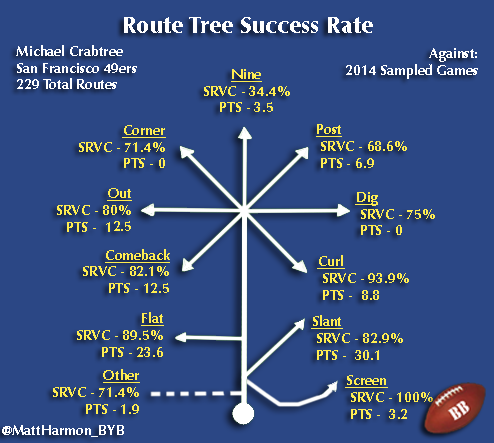 (SRVC denotes success rate versus coverage for each route. PTS indicates how many PPR fantasy points a receiver earned on each particular route)

The first number that stands out is a very poor 34.4% SRVC on nine routes. Again, this is more evidence that Crabtree’s injuries have cost him dearly as a professional. While never a player known for blazing speed, Crabtree is now a downright liability as a deep threat. He struggled to separate against many defenders the further down the field his vertical routes took him.

However, it’s fair that being a player in the deep game this was the only real issue for Crabtree in 2014. The rest of his route data backs that up. He posted solid SRVC scores on the majority of his short and intermediate routes. On one of his most frequently run routes, the curl, Crabtree posted an excellent SRVC score of 93.9%. He also did well on slants and comebacks. While his deep speed has been compromised, the veteran wideout still possess enough quickness to separate at the top and breaking point of his routes. Crabtree has always been an outstanding route runner, and several of the player’s Matt Waldman interviewed at the 2014 Senior Bowl agreed. Crabtree still posses all the “smooth” ability that those prospects admired, and he has only added some technical prowess.

Need more evidence to support Crabtree’s proficiency in the short and intermediate area? The majority of his production was earned on slants (30.1 PTS) and flat (23.6 PTS) routes.

So, despite being frequently open on most of his routes and against multiple brands of coverage, why was Crabtree not more productive in 2014? The answer primarily lies with his quarterback. Colin Kaepernick was a breath of fresh air for Crabtree’s career when he was first named the starter. Unfortunately, the young quarterback has failed to progress since then. He still rarely gets off his first read, and has become a “see it, throw it” quarterback. There may not be a starting quarterback less comfortable throwing with anticipation than Colin Kaepernick. That is the type of passer Crabtree needs. He creates separation at very specific points in routes, and Kaepernick rarely permits him to get to those junctures. At this point, Kaepernick is just locked into Anquan Boldin from the moment the ball is snapped, and is unable to anticipate other reads coming open.

For this reason, it would be best for Michael Crabtree to depart San Francisco as a free agent next month. His skills would be better suited in an offense that featured more timing based, short throws. An efficient, anticipatory passer would really know how to get the best out of a player like the one Crabtree has become.

Several intriguing options may present themselves. Teddy Bridgewater fits the bill perfectly in Minnesota, and they may have a need at receiver. Veteran quarterbacks like Tom Brady or Drew Brees would know how to throw Crabtree open right before he breaks. He would be a perfectly natural fit with Chip Kelly or Green Bay’s route concepts.

While we cannot be sure what the future holds for Michael Crabtree, we can see his 2015 Reception Perception Project data paints a very positive picture about the player he still is. Should he land with a new quarterback, that is better suited for him, there is still time for him to experience a career revival, and regain his status as one of the best receivers in the game. Signing Crabtree could prove to be one of the more prudent moves a receiver needy team makes in free agency this year.

Are you interested in learning more about Reception Perception, and seeing more players’ data? Be sure to become familiar about the upcoming publication, and follow the #ReceptionPerception hashtag on Twitter to keep up with all future featured receivers (including draft prospects).
Comment Form is loading comments...
Powered by