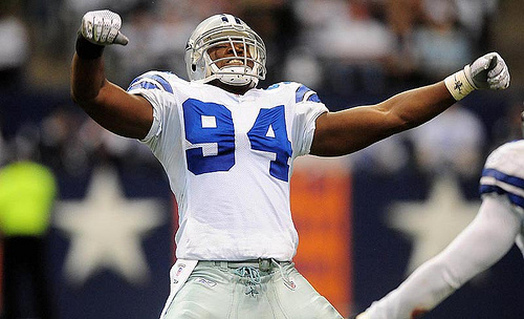 DeMarcus Ware is ready to show the NFL the he still has it while chasing a Super Bowl in Denver (Image: disports.com)
By: Matt Harmon
March 12, 2014


How he fits with the Broncos:

Last year the Broncos got surprisingly good production from another veteran pass rusher in Shaun Phillips. DeMarcus Ware will now slide into that role, and Denver can expect even better dividends.

Ware proved in the early stages of the 2013 season that he is comfortable playing as a down lineman in a 4-3. He also showed that is he still playing at a high level. Any scheme concerns about Ware with Jack Del Rio are unfounded, as he has had success with similar players. The Broncos have added a defender who can add a ton of teeth to their pass rush.

Denver is now set up to execute a strategy similar to what was done back when Peyton Manning was with the Colts. Manning would put up points in bunches, while on defense two dynamic pass rushers would come screaming off the edge as the other team played catch up; Dwight Freeney and Robert Mathis. The Broncos now have their own set of terrors in Ware and Von Miller.

If Miller returns to form, this tandem will be a nightmare to deal with. When Von Miller is right, there might not be a better pure pass rusher in the NFL. As an added bonus, Ware—by all accounts a longtime great teammate and veteran—can take Miller under his wing. The underrated Malik Jackson will certainly enjoy having two dominant edge rushers pushing quarterbacks up into his waiting arms.

At times last season, opposing quarterbacks could just sit in the pocket and pick the Broncos apart. That will no longer be happening with Ware now in the mile high city.

Denver has signed several other free agents this offseason, but DeMarcus Ware is certainly the best get so far. Here at the end of their closing window, the Broncos have added a surefire Hall of Famer to help get them over the top.


What he leaves behind with the Cowboys:

Its almost unfathomable that Jerry Jones—an owner who has always been known to hold on to his own players for too long—was able to cut one of the best he’s ever drafted. Unfortunately for his team, that’s the situation that their overwhelmed owner/general manger had forced them into.

Jones’ years of irresponsible overspending on his own mediocre talent finally made him pay the ultimate price. DeMarcus Ware was the only player the team could cut to get any sort of relief from the salary cap hell they were buried in. its just too bad he happened to be one of their two best players (at worst).

Worst of all is that Dallas had major problems on the defensive line last season. When Ware was injured they were forced to consistently play with substandard personnel. Most of that ragtag group is all that is left. When Ware returned, even at less than full strength, he at lest commanded enough attention that lesser talents like George Selvie were able to thrive. Who are the blue-chip players on the Cowboys’ line now?

Make no mistake, there is no sugar coating this for the Dallas Cowboys. The team released one of the franchise’s best players ever, and one of the few guys who could turn around their dreadful defense. The move leaves a gaping hole in Ware’s old spot.

Worst of all, this is a massive egg on the face of an organization that already embarrasses itself enough. If you look at the bigger picture, it paints an ugly story.

When you look at any contract Denver doles out, you have to keep one thing in mind; the team knows they are in a rapidly closing Super Bowl window. When Manning hangs up his helmet, John Elway and company know they are likely headed for a massive rebuilding project.

With that knowledge, they can afford to spend big on a veteran like DeMarus Ware. As Corry points out, this deal is very front-loaded. The Broncos will be paying Ware most of his money during the 2014 season. If his performance begins to decline, they can get out from under this contract later without much trouble.

Even without those nice options, it’s a fine contract. A deal with a $10 million average per year for an edge player in Backyard Banter’s “high-end starter” tier is perfectly acceptable.

DeMarcus Ware will likely come in and excel in Denver’s defense. He will be a fine player against the run, and will challenge for double-digit sacks. Additionally, if and when Von Miller is healthy, Ware’s presence will likely get him back to peak form.

Don’t rule out Von Miller challenging for the lead league in sacks, now that there is another dominant player on the line.

Ware’s pressure will also help out other teammates. The much-maligned secondary won’t have to hold their coverage for long. Linebackers, like Danny Trevathan, will find their lanes less clogged. Bringing in an all-world defender like DeMarus Ware makes all your defenders just a bit better.

Of course, in the next few years, Ware’s production and effectiveness will begin to decline. However, by that time Manning will be headed out the door and the entire team will likely be in transition. It’s a live for today move, but it’s as good a deal that’s been made so far in free agency.
Comment Box is loading comments...
Powered by