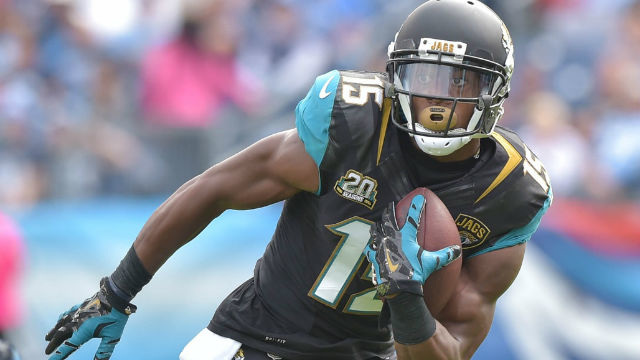 Use Reception Perception as a tool to identify breakout candidates like it did for Allen Robinson (Image: Don McPeak-USA TODAY Sports)
Reception Perception is back in full force. Now that NFL offseason is officially in swing, I can take the needed time to go through and chart out full-season scopes for a wide range of receivers. From NFL Draft prospects, ascending young professionals to long established veterans, I’ll be releasing data for them all.
​
Last offseason was a major progress point for Reception Perception. The series made the rounds on several podcasts, was featured on several big name venues, and grew in popularity seemingly by the day on Twitter. It was an amazing ride, and one that eventually landed me my position with NFL Media. I truly cannot thank my audience and all those that support the series enough. The only regret was that I had to cancel what would have been the first annual Reception Perception publication after taking the job with NFL.com. Moving from Virginia to Los Angeles and all that came with that happening right at the time to publication was set to release proved too much. All things happen for a reason.

However, the good news is that with the nature of my employment with the NFL, I can now take even more time this offseason to put together more data and samples of players. We're going to dive deeper into the receiver position with this methodology than any other site has before.

If you have questions about the utility of the methodology, put Reception Perception to the test. The series' data correctly revealed that Odell Beckham was ready to explode mere days before "the catch" in 2014, that Allen Robinson would enjoy a massive breakout in the 2015 season and that Michael Crabtree would rebound with a new team when most of the football world left him for dead. The series' track record is not perfect, naturally, but to hold myself and the process accountable, I reviewed all of Reception Perception's flags planted for 2015, and found the results mostly favorable. For the misses, I'll keep working to do my best in refining the process to avoid them, even if perfection in not attainable in this line of work.

Of course, Reception Perception is not the end all be all (no one evaluation tool is) but it is an important part of the equation that I trust, and the track record says you should consider doing so too.

So, thank you all for your interest in this next chapter of Reception Perception. I encourage you all to continue to come back to Backyard Banter from here on out. This page will be the hub for Reception Perception content throughout the offseason. Throughout my charting, I’m sure a few performances and trends will catch my eye. When those happen, I’ll put a post up here relaying what I’m seeing, and provide links to all my articles with The Washington Post.

For now, especially if you are new to the methodology, you can familiarize yourself with exactly what information Reception Perception provides:

Route Percentage – how often a receiver runs each pattern on the route tree.
Success Rate vs. Coverage (SRVC) scores – how often a receiver got open against the defenders covering him. A success is charted when a receiver "gets open" against the coverage. Creating separation, enough for the quarterback to have a reasonable target for the quarterback, is marked as a success. The only plays that are automatically given as success to the receiver are instances where a receiver is obviously held or interfered with (called or not). These plays make a big difference to an offense, and signify a receiver winning yards for his team by forcing the defensive back to hold him. There are five formats for SRVC scores:
- SRVC against man
- SRVC against zone
- SRVC against press
- SRVC on each type of route run
- SRVC against double coverage
Alignment Data – charting where a receiver lined up on each snap (slot, outside right, outside left or in the backfield), and whether they were on the line of scrimmage or not.
PPR Fantasy Points on each route (PTS) – this helps shed light on just how a receiver amassed their production.
Target Data – fairly self-explanatory, but not just targets, receptions and catch rate. Reception Perception tracks on how many times a receiver was targeted per route run, and how many routes they caught a pass on. This shows true involvement in the offense.
Contested catch conversion rate - how often a receiver successfully catches a pass where he is in traffic and has to leave his feet.
In space metrics - how often when a receiver gets an opportunity to run in the open field does he get dropped on first contact, break one tackle, or break multiple tackles.

A visual learner, you say? Well, you can see the series' data points explained in a video format, for your convenience. If you have questions about Reception Perception, please contact me on Twitter (@MattHarmon_BYB), or through my email (mharmon2570@gmail.com). Any comments, feedback or critiques are appreciated.

If you are looking for examples of the data you get from Reception Perception, here's Antonio Brown's numbers from his entire 2014 sample. 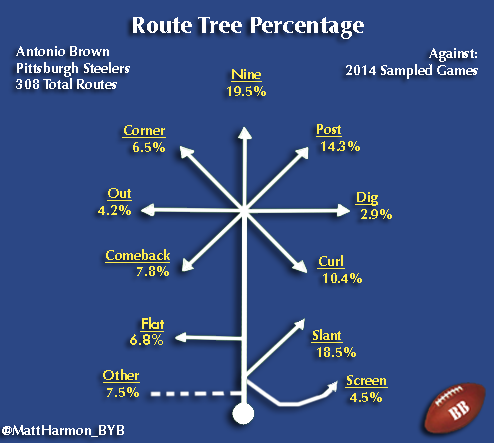 You can see here which routes Brown runs most frequently (post, nines, slants) and ones he does not run as often (outs, digs, screens).
​ 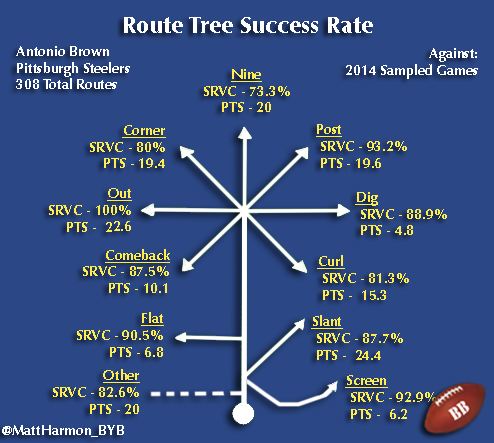 This chart shows you how often Brown beat the defense's coverage on each given route. Remember, its helpful to use this chart is conjunction with the Route Percentage Chart to put everything into context. Knowing that Brown ran a slant on 18.5% of the routes charted, it makes his SRVC score of 87.7% all the more impressive, and shows his PTS of 24.4 is steady production. You can also learn that while Brown did not run corners and outs all that often, he made most of big plays on those routes. They were not some of his most used routes on the percentage chart, but his SRVC and PTS marks were very high on corners and outs.
​

Now, here's the full display of Brown's 2014 Reception Perception data:
Or, if it is easier for you to view, you can download the spreadsheet, and review it at your convenience:

Download File
﻿You get everything from this spread sheet. Reception Perception gives you hard numbers on how good Brown is at contested catches (81.8% conversion rate), how often he beats coverage (man - 79.7% and zones - 93.6%) and how often he was targeted per route (31.8% of routes). That is just the beginning, as you can see there are many more numbers to dig in to.
​

So, there you have it; a sample of the wide array of data you get by following Reception Perception. Make sure to use the #ReceptionPerception hashtag on Twitter so you follow along with the series, and be ready to get your hands on the full publication this summer.

Reception Perception media appearances
Nelson Agholor can bounce back in Doug Pederson's offense
Improved technician Donte Moncrief is set to explode
Only one concern can hold Sammy Watkins back
Bruce Ellington has a chance to flash with the 49ers
Albert Wilson and the Diary of a Truther
Willie Snead built an impressive resume we must not ignore
Welcome the ascending Tyler Lockett to rarified status
Kamar Aiken is the answer to the Ravens receiver riddle
Jackson and Doctson make the Washington WRs a strength
Browns make a refreshing first pick in Corey Coleman
The fruitless search for fatal flaws with Laquon Treadwell
Why there will never be an overall grade
The changing variables for Torrey Smith point to a rebound
Rashard Higgins - Never tell me the odds
Keyarris Garrett is a unicorn in this draft class
Malcolm Mitchell is a top-10 WR prospect
2016 NFL Draft prospect results
Golden Tate replacing Calvin Johnson
Jeff Janis, Trump Cards and Sorting Through the Noise
Top-4 NFL Draft WR primer
Comment Form is loading comments...
Powered by