The Four Matchups to Watch in the Super Bowl
1)    Marshawn Lynch vs. the Broncos’ front seven

Everyone knows Marshawn Lynch is the foundation of the Seahawks offense; now more so than ever with Russell Wilson’s recent struggles. Lynch carried the offense against the Saints, and broke things open with his long touchdown against the 49ers.

Against the Broncos, Lynch will have to find his own running room against a front seven that has been stingy in the playoffs. Led by Terrance Knighton, Denver has been shutting down the run game: 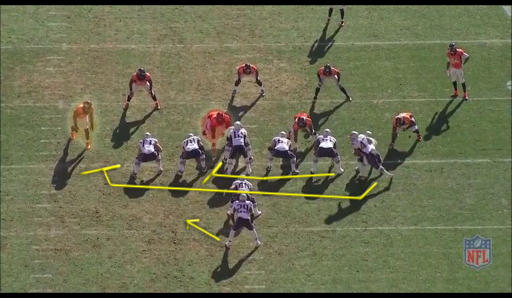 The Patriots tried to establish their power running game early on during their loss to the Broncos. Here, the Patriots bring the tight end to seal Shaun Phillips on the edge. New England also pulls their right tackle in order to get some favorable blocking for LeGarrette Blount. It is a well-designed downhill running play.

Terrance Knighton’s great play has been the catalyst for other members of the Broncos front seven. On this play, Knighton (highlighted in red) blows past his first blocker with an overarm move. The center never gets his hands on him, and Pot Roast is already in the backfield.

Knighton continues his rampage against the pulling right tackle, who also fails to block the defensive tackle. His penetration allows Phillips (highlighted in orange) to make the cleanup tackle:

Everyone knows Knighton is a big man, but his quickness and athleticism is underrated. It’s probably the biggest reason he blows up running plays like this.

The Broncos, and their monstrous defensive tackle, have been feasting on primarily power, man-blocking schemes in the playoffs. Marshawn Lynch is regarded as a power back, but he is far more versatile than that. The Seahawks like to run a lot of zone blocking, and cut backs to take advantage of his quick feet.

It is certainly worth watching whether those stylistic differences help neutralize Terrance Knighton’s penetration. Lynch succeeded against plenty of muddled backfield against the Saints.


2)    Broncos’ receivers vs. Seahawks’ defensive backs
The best set of receivers against the premier secondary in the NFL. It’s a natural matchup to highlight. Both sides will experience something they have yet to combat this season.

The Broncos receivers have yet to face a big, imposing secondary like the Seahawks. Yet, Seattle’s corners have yet to be tested by such a deep receiver group, like the Denver corps.

The Seahawks best advantage might be in the physical aspect of coverage, and some diversified concepts: 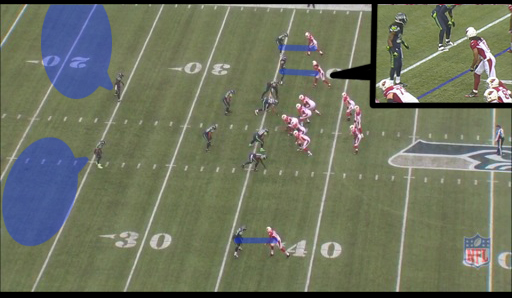 For the most part, this play is pretty typical of what the Seahawks do on defense. The outside corners are in press-man coverage, while the safeties are roaming deep. The interesting wrinkle comes in the slot position.

Richard Sherman, the best corner in the league, is not often used as a shadow on the opposition’s best receiver. However, if there is a threat great enough to draw Seattle’s respect, the proposition isn’t out of the question. On this play, Sherman plays inside the formation to cover Larry Fitzgerald in the slot.

Sherman’s position is not the only interesting wrinkle. His coverage call is also an effective measure in defending Fitzgerald: 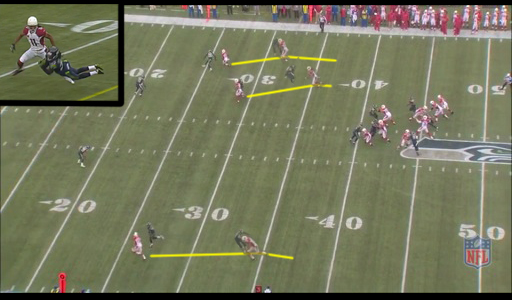 The outside corners both get physical with their receivers, and jam them at the line. However, Sherman plays off man on Fitzgerald. He can really shine in this setting. Sherman uses his intelligence and knowledge of receiver’s routes to gain great leverage on Fitzgerald.

Carson Palmer chooses to throw to the unjammed Fitzgerald, and Sherman makes him pay. He lunges inside to intercept the pass.

Against the Broncos, Demaryius Thomas is certainly the best of their deep receiver group. It will be interesting to see if Seattle chooses to mix up their coverage schemes against Denver. The smart money is to bet they just play them straight up.

The Seahawks might actually have a nice advantage here. If they can win the physical battle with Denver’s receivers, that will disrupt Peyton Manning’s timing.


3)    Seahawks’ pass rush vs. the Broncos’ offensive line
A reciprocal relationship exists between this match up and the last one. If the Seahawks secondary can hold their coverage longer, the pass rusher will have more time to get to Manning. They might just need it, because the Broncos offensive line is on fire.

Peyton Manning’s pass protection has been sensational in the post season. New England, in particular, struggled to get any sort of pressure on the Broncos’ quarterback: 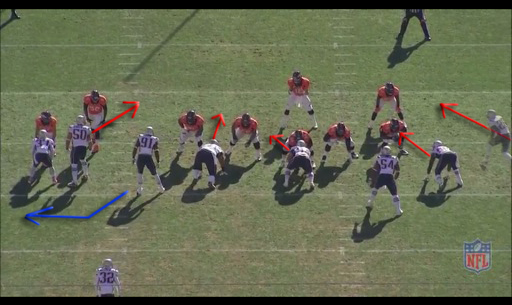 The Patriots dedicate five players to rush the passer. It seems like Jamie Collins will be that fifth rusher, but he drops into coverage. Instead, a cornerback comes—off screen—to attack the left edge. Despite the extra man, New England doesn’t come close to touching Manning: 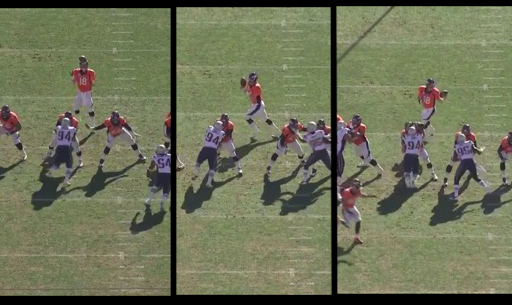 What’s interesting—and comical—about this play is that Manning makes an unusual bungle in the pocket. He bounces the snap above his head and it takes him several seconds to corral the ball. Manning’s mistake actually affords New England a few additional seconds to get pressure. It didn’t matter: 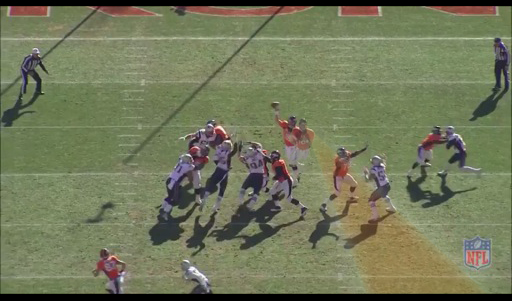 The Broncos line holds the pocket during Manning’s juggle, and then some. Peyton still has time to read two areas of the field, before firing the ball to Eric Decker. The Patriots waste a perfect opportunity; because they could to get any pressure.

Of course, the Seahawks pass rushers present a much greater challenge. Michael Bennett headlines a deep group of linemen that excel at getting interior pressure. Players like Bennett, Brandon Mebane, and Clinton McDonald could be big factors.

The Seahawks would be wise to adopt the Patriots strategy. Usually it isn’t wise to bring an extra rusher against Manning, because he can diagnose things so quickly. However, since Seattle has such a great secondary, they might be able to get away with it. A fifth rusher such as Bruce Irvin, would go along way to besting an offensive line that is playing very well.


4)    The Percy Harvin factor vs. the Broncos’ defense
The ultimate X-factor, no one can be quite sure what Seattle will get from Percy Harvin. His health has kept him off the field for the vast majority of the year. He is supposedly healthy, and will play a role in the Super Bowl. The limited viewing of Harvin we got three weeks ago was quite exciting: 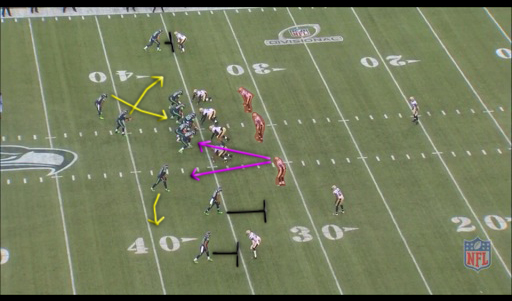 This is by far the most exciting look the Seahawks can deploy with Harvin on the field. The play comes right out of the Chip Kelly playbook, and it puts a ton of stress on the defense.

The quarterback has at least three options post snap. Wilson can hand off to Lynch, keep it himself, or turn and throw the ball to Harvin on a little bubble screen. The three defenders—highlighted in red—have to watch out for three things. The safety over Harvin is especially overworked. He must keep one eye on Harvin while also watching the backfield.

Seattle only threw this look out a few times, but there is a lot of potential here: 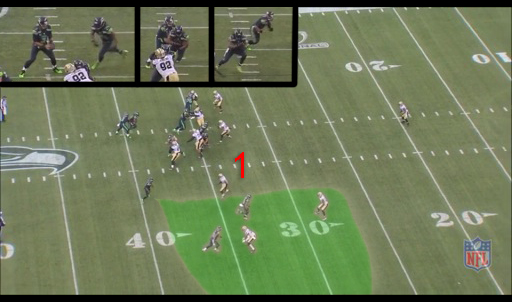 Wilson elects to hand the ball off to Lynch, because the offensive line opens up a few holes. However, imagine if he threw the screen to Harvin.

Due to the stress of the read option, Harvin only has the one defender guarding him. That safety is also not in an ideal position to make the quick stop. The odds Percy Harvin eludes that tackle are very high. If he does, he has a lot of green space to work with, provided the receivers execute their blocks effectively.

A lot of that analysis was pure projection, but that’s all we can do with Harvin right now. If he can bring this extra dimension to the Seahawks offense for twenty-five or more snaps a game, it could mean at least one more additional score.


My meaningless pick that you don’t care about:

All week I was ready to take the Broncos, but after writing up these match ups I nearly convinced myself to change my pick. Still, I am sticking with Denver. I don’t have a great reason, but just feel Peyton Manning will be dialed in. Enjoy a great game either way!
Comment Form is loading comments...
Powered by