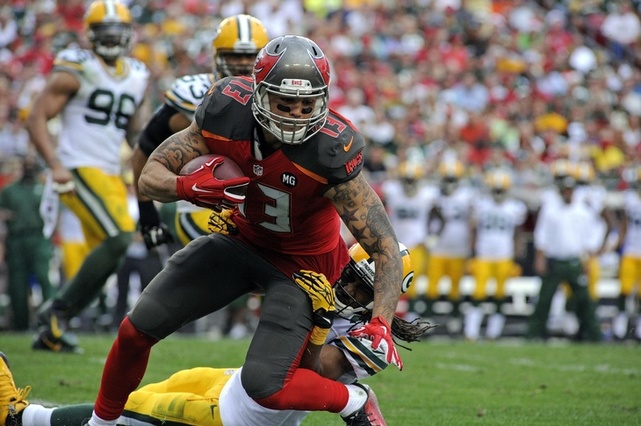 SRVC scores tell us a lot about Mike Evans and other rookies from last year (Image: David Manning/US Presswire)
Success Rate vs. Coverage (SRVC) scores measure how often a receiver got open against the defenders covering him. A success is charted when a receiver "gets open" against the coverage. Creating separation, enough for the quarterback to have a reasonable target for the quarterback, is marked as a success. The only plays that are automatically given as success to the receiver are instances where a receiver is obviously held or interfered with (called or not). These plays make a big difference to an offense, and signify a receiver winning yards for his team by forcing the defensive back to hold him.

There are five formats for SRVC scores:


All Odell Beckham Jr. everything - In what should be the least surprising revelation of this entire project, the rookie out of LSU was the highest performing in SRVC. He bested his peers in beating each brand of coverage. In fact, of the near 50 NFL receivers charted this offseason, Odell Beckham Jr. had the highest SRVC against man. Antonio Brown trailed just barely trailed Beckham’s 80.1% with a 79.7% score. Odell Beckham’s SRVC scores only confirm what was all to evident watching him play; he had a first year indicative of an all-time great. After charting Beckham for Reception Perception, it’s hard to not imagine him becoming a legendary type of NFL player. 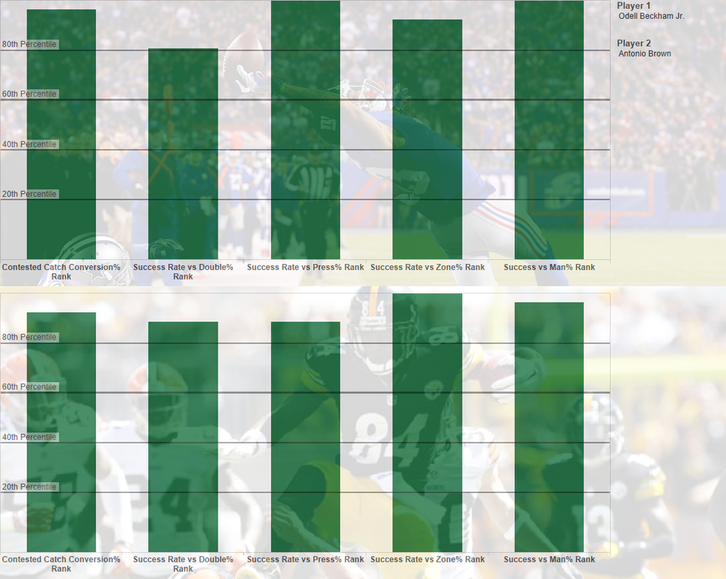 Odell Beckham Jr.'s SRVC scores were on par with some of the NFL's best wide receivers
Jordan Matthews against zone and press coverage – One of the more hotly debated players of the 2014 class. Jordan Matthews’ fans will point to his workout numbers and outstanding college production to assert that he carries the profile of a future number-one, split-end receiver. The unconvinced will say those numbers do not show up on tape, and that he is simply a big slot receiver. Truth be told, Reception Perception shines light on the reality that the answer is somewhere in the middle. Matthews 77.8% SRVC against zone is quite impressive. He’s able to feel out coverage well, and is an intelligent, studious player. Matthews does his best work sifting through the traffic in the middle of the field, and that is why Chip Kelly identified the big slot receiver role as a natural one for him. On the other hand, he scored incredibly well against press coverage with an 85.7% success rate on 14 attempts. While his 59.8% SRVC against man is underwhelming, his press coverage score indicates he can likely function on the outside as well. It will bear watching just how much Kelly choose to use him there. Should he choose to leave Matthews inside that is not an insult, because as Reception Perception quantifies, he is incredibly proficient in that role.