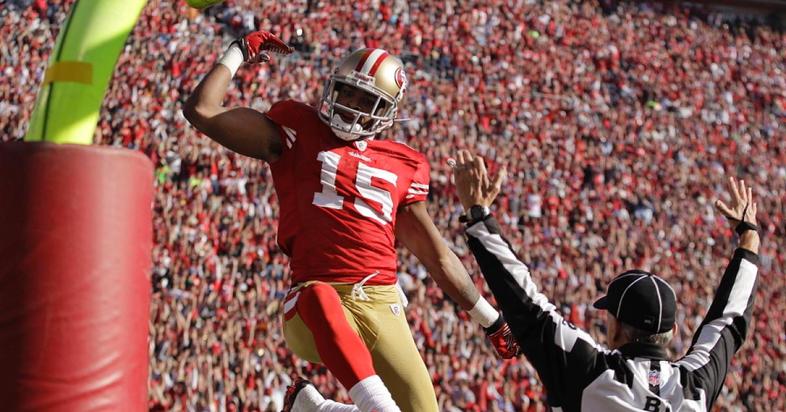 The Raiders' latest addition at wide receiver appears to be a perfect fit with Oakland's young quarterback (Image: Ben Margot - AP)
Once a top-10 draft pick and a decorated college athlete, Michael Crabtree’s NFL career has been a disappointment. He’s only posted a single 1,000-yard season, and that was back in 2012. When Colin Kaepernick took over at the helm of the 49ers offense, Crabtree publically rejoiced. It looked as if Crabtree would finally have the signal-caller he needed to complete a leap into the highest tier of NFL wideouts. Unfortunately, that very offseason he suffered a torn Achilles tendon, causing him to start 2013 on the PUP list.

Since that injury, Crabtree has not looked like the same player. To make matters worse, the chemistry he once shared with Kaepernick seemed to evaporate, as the quarterback appeared to regress. Once Crabtree’s deal expired, there was little interest from the player or team to rekindle the relationship.

Despite an unproductive contract year, Reception Perception identified Michael Crabtree as a player getting a bum rap. Many analysts were unconvinced this former high draft pick would get his career back on track. However, his Reception Perception data told a story of a player who was still very effective, and just needed a new home. Interest in free agency was minimal, amid rumors of locker room personality, injury and money concerns. All that being said, and contrary to popular belief, Michael Crabtree performed very well on the field last season

Crabtree’s Success Rate Versus Coverage scores from his 2014 Reception Perception sample were astounding. The former 49ers wide receiver scored well above the current average charted for NFL receivers in each SRVC category. No matter what brand of coverage he faced, he freed himself with regularity.