Reception Perception: Only one concern can hold Sammy Watkins back from his ceiling 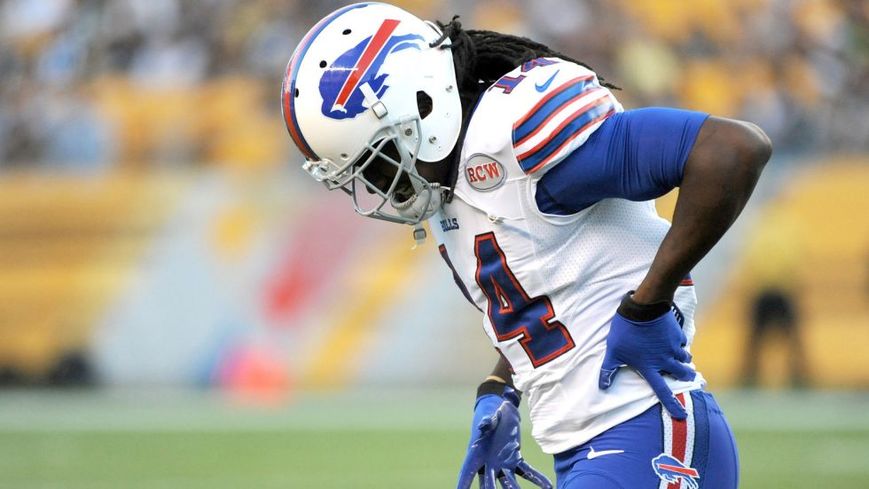 Sammy Watkins can be one of the best receivers in the NFL but has only nagging concern (George Gojkovich / Getty Images North America)
Last year, Reception Perception begged us to consider the entire range of outcomes for Sammy Watkins. Never did that data indicate he would be a flop in the NFL, but woeful figures like his 49.5 percent Success Rate vs. Coverage (SRVC) score when facing man defenses raised major concerns.

Watkins’ season-end numbers look strong with 80.5 yards per game, nine touchdowns and leading the NFL in fantasy points per opportunity. Yet, he still mostly showed that wide range of outcomes through the course of the 2015 season. Vontae Davis completely erased him in Week 1, then he missed three games but finished the year on a massive tear.

Once Tyrod Taylor got comfortable in the starting role and Watkins was healthy, the second-year receiver dominated. In the final six contests of the regular season, Watkins racked up 35 receptions, 679 yards and scored six times. Such a torrid finish to conclude his sophomore NFL year was enough to demonstrate this player’s true potential when he gets an acceptable target volume from a competent quarterback.

Looking through his Reception Perception route charts from last season, we see that potential exemplified.​ 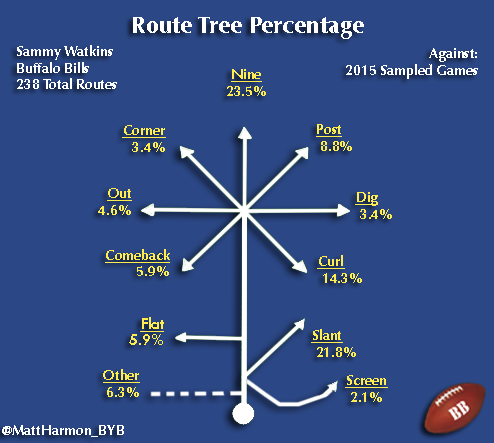 In 2015, 45.3 percent of Sammy Watkins’ 238 sampled routes were either the slant or nine. That’s quite a contrast from his far more balanced route percentage chart in 2014 where the nine was the only pattern it skewed towards—just over the league average at 20.9 percent.

Especially toward the end of the season during that torrid stretch, the Bills coaching staff made it a priority to get the ball in Watkins’ hands early and often. The young wideout openly expressed frustration about his volume in October. Give credit where it’s due; Buffalo listened to their former fourth-overall pick. Watkins received a target on 29.4 percent of his sampled routes in 2015, which is nearly in line with the usage those top receivers Watkins mentioned in his complaints see in Reception Perception. Of course, the games taken towards the end of the season bumped up that figure, showing the Bills got the message.

You could make an argument that simplifying his route assignments, and actually funneling the passing offense through him bumped up Watkins’ numbers. However, there’s far more to it than that. In his rookie season, Watkins was a splash player who couldn’t create requisite separation on a route-to-route basis. 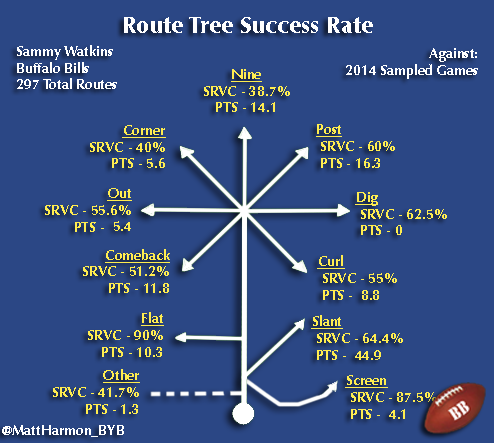 (SRVC denotes success rate versus coverage for each route. PTS indicates how many PPR fantasy points a receiver earned on each particular route)
In 2014, the only pattern where Watkins scored above the NFL average in SRVC was the flat route. He showed off some explosive ability with a handful of big plays and almost cracked 1,000 yards, but he struggled to separate.

It was hard to think of a receiver who I was more interested to see the Reception Perception data after 2015 than Sammy Watkins. Given my positive thoughts on him entering the league, his dreadful 2014 results shocked me. The difference between those numbers and his follow-up season could not have been starker. 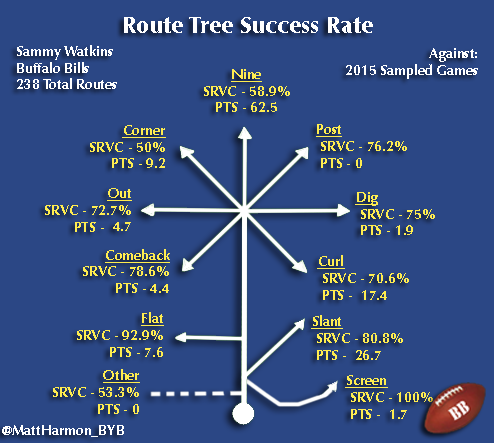 In a sharp diversion from his rookie campaign, we see Watkins created separation at every level of the field. The only routes where he did not score above the NFL average SRVC were the curl, corner and “other”.

The Bills made tremendous use of Watkins’ skills in the deep game. He had an aDOT (average depth of target) of 18.3, the highest of any receiver who saw more than 70 targets, per Pro Football Focus. Watkins rewarded them kindly with tremendous raw production, scoring 62.5 PTS on nine routes. Watkins also showed off his pristine mixture of athletic ability and precise deep route-running by posting a strong 58.7 percent SRVC on that pattern. His 2015 score shattered his dreadful 38.9 percent mark from 2014.

While we are rightfully fawning over his deep game prowess, as my Footballguys colleague Adam Harstad points out, the Bills should make more use of Watkins in other areas. He’s a chore to cover on routes that require a sharp cut at the stem. His 80.8 percent SRVC on slants and 76.2 percent on posts were both high-end scores.

You also cannot extend enough praise to Watkins’ detail and nuance as a route runner. Two of the more difficult patterns to execute, the out and comeback, feature strong scores on Watkins’ chart.

I was concerned about Watkins’ consistency as route-runner after his rookie season and wondered if we overstated his ability as a technician based purely on flashes in college. His 2015 Reception Perception eases, if not completely erases those concerns. When scanning his two seasons worth of compiled SRVC scores we see the progress.
(Red indicates the figure is below the NFL average, Green is above and Yellow is within one percentage point.)
No player improved their Reception Perception scores over the course of two seasons more than Sammy Watkins did in his rookie to sophomore campaign. His ability to routinely defeat press and man coverage on a route-to-route basis was a major contrast from 2014 data. Any time you see SRVC scores at or above the 70 percent mark you’re normally dealing with NFL stars like Allen Robinson, Dez Bryant or Keenan Allen.

So what was the reason behind Sammy Watkins’ massive improvement as a route-runner, reflected in his Reception Perception scores, from Year 1 to Year 2? It’s possible he just got better with a bit more seasoning. However, if I had to place my chip on an explanation it would be a two-fold with ramifications for Watkins and the receiver position at large.

It came out after the 2014 season that Watkins needed surgery for a hip injury he played through, in addition to other maladies. For the position as a whole, damage to the hip might be one of the most catastrophic occurrences. It’s a theory Dr. Jene Bramel of Footballguys proposed when studying Brandon Marshall prior to the 2013 season. Bramel asserted that a hip injury “would hinder him at the most critical points of route running, specifically limiting his ability to sink his hips and come out of breaks quickly.”

From a body mechanics standpoint, that makes quite a bit of sense. From a route-running perspective, it seems almost intuitive that hip damage would compromise a receiver’s execution. Perhaps we need to consider this whenever we see a player at the position sustain a hip injury in the future. There certainly seems to be a correlation between Watkins’ hip injury and his poor Reception Perception results as a rookie when viewed in conjunction with his improved scores this past season.

However, this also raises a point of concern about Sammy Watkins as an individual. Perhaps he is one of those receivers who will just struggle to play hurt more than others. It’s quite clear he has a sky-high ceiling when he’s closer 100-percent healthy. Yet, his Reception Perception results seem to at least suggest that he loses quite a bit of his separation ability when he’s knocked off that level.

Watkins needs that ability to be able to succeed on the field. He’s the brand of receiver who relies on speed and quickness blended with precise stop-and-start ability and technique to work open from coverage. He’s clearly special in those areas, which help offsets his below average contested catch conversion scores (46.2 and 55.6).

However, clearly from his 2014 numbers, when lower body injuries start to sap effectiveness in those areas he takes a sizable step back as a player. That’s not good news for a player who seems to be hurt quite often. Watkins dealt with a calf and ankle injury in 2015, has yet to practice this offseason after breaking his foot and is no certainty to be ready for the start of training camp.

The injury list keeps growing longer for Watkins, particularly to his lower body. Again, based on his 2014 Reception Perception we have to be concerned about effectiveness if he does continue to sustain and attempt to play through these maladies.

After his rookie season, Reception Perception demanded us to examine the entire range of outcomes for Sammy Watkins. His 2015 data gave a strong and decisive answer to where he as an individual truly falls on that range. He’s a great technically precise playmaker, oozing with talent and one of the best young receivers in the game. However, injuries appear to take a painfully real toll on his game.

We should all root for greatness and desire to see those capable of it carry it out unhindered. Here’s to hoping health permits Sammy Watkins to remain on that end of the range of outcomes. It’s the only thing that holds him back from hitting his tremendously high ceiling.
Comment Form is loading comments...
Powered by