Reception Perception: Bruce Ellington has a chance to flash this season with the 49ers 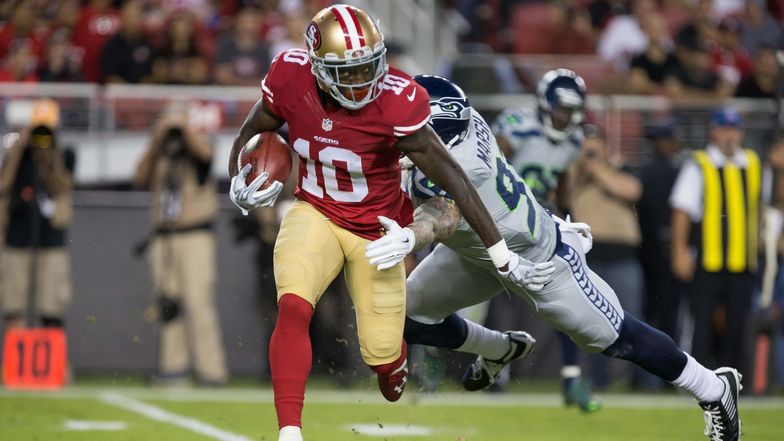 Even with a limited career resume the stars might be aligning for Bruce Ellington to breakout this season (Image: Kelley L Cox-USA TODAY Sports)
Back in April we looked at Torrey Smith’s Reception Perception and how his still present ability married with a coming change in variables made him a clear bounce-back candidate. The fantasy community corrected their early misevaluation and he’s now more of a seventh to eighth round pick at WR41 in MFL10s. He’s bound to go lower in casual redraft leagues with more of a “what have you done for me lately” mindset, but the secret is largely out on Smith.

We know that on average the last three years, Chip Kelly’s teams ran 114 more plays per season than the 49ers. San Francisco’s roster is also wrought with holes, and they are widely considered to be a bottom-five NFL team. Playing from behind so often will only increase the passing volume of Kelly’s offense, which already ranked 5th and 6th in the NFL the last two seasons. His top-four pass-catchers in 2014 (Jeremy Maclin, Jordan Matthews, Riley Cooper, Zach Ertz) collected 143, 103, 95 and 89 targets, and that was on a winning 10-6 team.

With Smith being the only established pass-catcher on the roster, he’s almost a lock to crack 120 targets, if he plays 16 games. However, that volume has to spill over to the other players on the roster. The 49ers did not bring back Anquan Boldin in free agency and made no significant additions to replace him. That leaves a CFL prospect, Eric Rodgers, recovering sophomore DeAndre Smelter and third-year return man Bruce Ellington as the intriguing young candidates vying for targets.

Count me among those most intrigued by Bruce Ellington. We’re not alone in that assessment either. Important figures within the organization helped bring the buzz to Ellington’s name.

After diving into the tape of his new roster, Chip Kelly came away impressed with Ellington. “When you look at just the short time that I’ve seen just film of him you’re like ‘Wow.’ That kid can do some interesting things,” Kelly told Matt Maiocco of CSN Bay Area.

Standing at 5’9, 197 pounds with 4.45 speed entering the NFL, Ellington profiles as the type of athlete that moves the needle for Chip Kelly. He boasts an agility score in the 97th percentile, a burst score in the 80th percentile and a SPARQ rating in the 93rd percentile, per Player Profiler.

It’s not just Kelly who thinks brighter days could be ahead for the third-year receiver. Likely starting quarterback Blaine Gabbert called Ellington a “vet” and said “he’s balling out right now…and he’s catching a ton of balls right now” in OTAs. Ellington ran as the starting slot receiver so far this offseason. Per Pro Football Focus, Eagles receiver Jordan Matthews ran 533 routes from the slot last season, second most among NFL receivers. Matthews racked up 229 targets in his two years playing under Chip Kelly. There’s no guarantee that Kelly just rolls over that position to his new team, but at least there’s a precedent for opportunity here.

Of course, just as it was with Torrey Smith, the critical piece of the puzzle is whether Bruce Ellington is good enough to take advantage of this influx of opportunity. Unlike Smith’s case, there is no history of past performance, with only 19 career catches on Ellington’s resume.

Reception Perception is the ideal methodology to evaluate the quality of an unknown like this. Normally receivers who played less than 200 snaps in a season don’t qualify for the charting process. Yet, if we broke the rules for Jeff Janis earlier this offseason, we can do so for a player that I held great affection for in that loaded 2014 draft class.

Just as with the Janis Reception Perception evaluation, we’ll need to mentally adjust some of these scores due to the less than desirable sample size. We have eight games with double-digit snaps to sample for Ellington, as opposed to one with Jeff Janis, but his usage was limited. However, we will come away with a better understanding of what Ellington might do in a new role within Kelly’s offense.

Ellington took 41.2 percent of his Reception Perception sampled snaps from the left wide receiver position and 33.6 percent from the right. He frequently lined up as the isolated receiver in 22-personnel packages (two running backs and two tight ends). Expect his slot snaps (22.1 percent) to take a major uptick if the foretold usage pattern becomes a reality.

In this limited look, Bruce Ellington ran just 77 routes and received a target on a mere 16.9 percent of them. He did show pretty well with his chances, posting a catch rate of 69.2 percent and hauling in a pass on 11.7 percent of his routes.

Some of those opportunity-based metrics suggest that when called upon in 2015, Ellington delivered. Looking at some of his route data we continue to see that trend unfold. 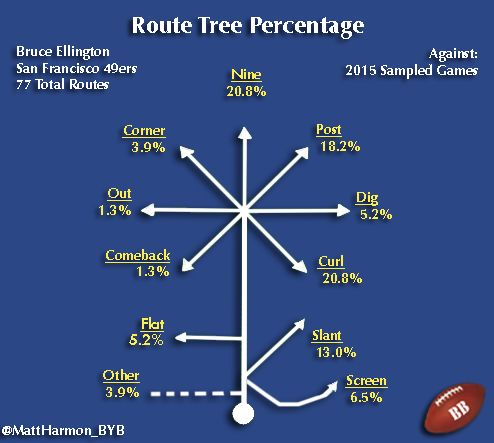 Ellington’s two most commonly assigned routes were the nine and the curl, both checking in at 20.8 percent. His athletic testing numbers make him a great candidate to stretch the field. The high curl route rate also makes sense, as deep threats often come in with sizable usage on the pattern. Being able to snap back to the passer or taking advantage of the cushion the defense affords the receiver is paramount.

The post and slant route were the next highest represented. If he does move into a more full-time slot role in 2016, expect Ellington to run those routes with great frequency. Chip Kelly’s offense calls for his receivers to win on a high number of crossing routes for the quarterback to accurately pick apart the middle of the field. It’s a good sign Ellington has experience on them already.

Elsewhere on the route tree, Ellington ran every other pattern at least once. Game-to-game his route portfolio was a bit inconsistent. His most diverse set of assignments came in Week 8 against the Rams, where Ellington ran more of a variety of patterns than he did in other contests. However, his success rate scores show that he can win all over the field. 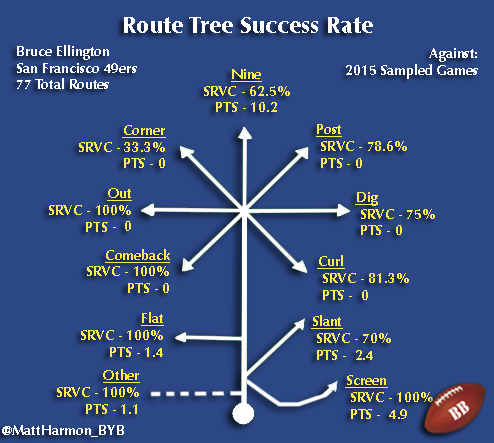 (SRVC denotes success rate versus coverage for each route. PTS indicates how many PPR fantasy points a receiver earned on each particular route)
Due to the small sample size, we probably can’t make one-to-one style conclusions about how Ellington’s Success Rate Vs. Coverage scores relate to the charted NFL average. With that being said, the only two routes where he scored below the NFL average were the slant and corner routes. His 33.3 percent SRVC on corners was the only truly poor figure, as seven out of 10 success rate on the slant is not so horrible even if it’s below the average.

His two most commonly run routes, the nine and curl, were also some of his best scores. Only high-end NFL deep threats run the nine route with a SRVC score over 60-percent. The NFL average is in the 51-percent range. There’s no doubt Ellington brings his measured athleticism to boast strong play-speed. Although he seems destined for the slot receiver position, he can burn defenses deep and make big plays in 2016.

His 78.3 percent SRVC on post routes, a staple of the Kelly offense, also speaks to his downfield ability. By comparison, Jordan Matthews had a 64.5 percent SRVC on a 14.2 usage rate running post routes as Chip Kelly’s slot receiver in 2014.

We’ve talked about the curl route a good amount in Reception Perception of late, and how it can be an indicator of a strong route-runner. Ellington scored a fine 81.3 SRVC on the curl. He has more athletic ability than some of the other mentioned in that Willie Snead piece, but he should not be undersold as a technician, especially at the line of scrimmage.

(Red indicates the figure is below the NFL average, Green is above and Yellow is within one percentage point.)
Again, let’s inject a breath of caution here due to the minuscule sample size, but these overall SRVC scores are quite astounding. While only facing 16 attempts, Ellington boasts a strong SRVC of 81.3 when facing press.

One of the traits that sold me on Ellington coming out of South Carolina in 2014 was his ability to play bigger than his 5’9 frame. Press coverage didn’t bother him; he showed off a variety of release techniques and the necessary strength to constantly defeat jams. It looks like that’s carried over into the NFL. Functioning in tight physical coverage remains a strength in his game, with a 70.6 SRVC against 34 man attempts.

He also played the ball well in traffic, though we have yet to see much of that in the pros. Ellington registered just one contested catch attempt, which he failed to bring down, in his Reception Perception sample.

Of course, Ellington may not see as much press or man coverage if he plays Chip Kelly’s slot position. Jordan Matthews registered 126 attempts against zone coverage to just 92 versus man in his rookie year Reception Perception playing that role. Already showing a knack for cycling through the congested middle of the field, Ellington registered a sterling 81.4 percent SRVC against zones in 2015.

Once into the open field, expect Ellington to make Kelly swoon with the type of after the catch prowess he demands. Ellington broke a tackle on four of his five in space attempts in Reception Perception. It makes sense he’s a dangerous threat with the ball in his hands, given his solid resume as a kick returner. Based on historical precedence, RotoViz’s Jon Moore believes that can be a sneaky indicator of a future upward trajectory at the receiver position.

There are not many holes to pick here; Bruce Ellington passed his initial Reception Perception test with flying colors. He showed the ability to get open on a wide-array of routes while threatening defenses deep and after the catch. His Reception Perception gave evidence he can succeed in Chip Kelly’s slot role with his SRVC against zone defenses and one in-breaking routes.

With the knowledge provided by Reception Perception that Bruce Ellington has the individual ability to succeed in the slot receiver role, it all comes down to whether he ends up with it. If so, he will come away with a surprising amount of targets by season’s end. In that scenario he’d be a lock to pay back his current WR90 asking price in MFL10s.

The data is extremely limited on Bruce Ellington but there’s enough evidence to suggest we could be at the onset of a career about to take off. At worst, he deserves the football world’s attention as a player set to outproduce expectations.
Comment Form is loading comments...
Powered by