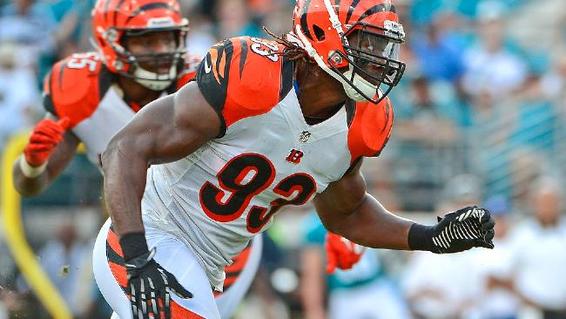 
How he fits with the Buccaneers:

The Bucs have lacked a great edge rusher for several years, and now Michael Johnson can fill that role. Johnson isn’t a true dominant sack master, but he is a very good starting defensive end. Johnson earned high marks for his work in stopping the run this season. That aspect of a defensive end’s game never gets enough attention, but it does add to Johnson’s value.

While Johnson did only manage 3.5 sacks last season, he is still a quality pass rusher. The now former Bengal did a good job hurrying quarterbacks, but did have trouble closing the deal. If he cleans up a few technical issues he can absolutely produce results closer to the 11.5 sack season he had in 2012.

The best part about Johnson’s move to Tampa is the supporting cast he will be joining. There was some concern about him being a featured player, and not being surrounded by stars like Geno Atkins. However, in Tampa he will play second fiddle to another dominant defensive tackle in Gerald McCoy. Add in the fact that the Bucs added interior disrupter, Clinton McDonald, today as well, and it doesn’t look like Johnson will have to carry to heavy load.

Michael Johnson will immediately assume the role of starting right defensive end for the Buccaneers. The team has built a strong interior rotation next to him, and has a few options to play across from him.

The young pass rusher’s best years could very well still be ahead of him.


What he leaves behind with the Bengals:


When the Bengals gave Carlos Dunlap a nice contract extension, and only franchised Johnson, they essentially chose the former over the latter. Cincinnati has long been preparing for this day to come.

Johnson was a fine player for the Bengals, and one who will be missed. But to say he was the key to their defense would be an exaggeration. Johnson was never a dominant player. He also greatly benefitted from playing with other talented lineman like Dunlap and especially Geno Atkins. The former third rounder was a great piece in the Bengals defense, but they won’t crumble now that he’s gone.

The plan to replace Johnson will somehow involve last year’s second round pick, Margus Hunt. The former Estonian was an older college prospect, but is incredibly athletic for his massive (6’8” and 277 pounds) size.

Hunt was regarded as a quite unrefined, but truly moldable piece of clay when the Bengals drafted him. Former defensive coordinator, Mike Zimmer, took particular interest in making him into a football player, not just an athlete. The Bengals will have to hope Hunt has been molded into something that resembles a starting caliber defender.

If Hunt is indeed the 2014 starter, he will team with Dunalp to form quite a big and athletic tandem. However, don’t expect the Bengals to sit on their hands. They will likely bring in another pass rusher to help offset losing Johnson.

It’s rather surprising the Bucs were able to procure Michael Johnson without giving him north of $10 million per year. Typically a defensive end in his prime would be able to command that type of money on the opening day of free agency. Give credit to the Bucs organization for not grossly overpaying.

Considering that Everson Griffen got a similar deal, with a much less impressive resume, this contract looks pretty nice. Johnson must have really liked the pitch given to him by Tampa Bay to accept this deal right away.

If Johnson had shopped himself around a little longer, its not out of the question he could have gotten a more robust contract. Instead, he took a nice sized deal and went to a place he is best set up to excel.

That’s how it should be in free agency.

It would be pretty shocking if Johnson doesn’t exceed his 2013 season’s sack total. With Gerald McCoy commanding attention on the interior of the defensive line, Johnson should be free to exploit one-on-one blocking.

Again, it would be unwise to forget about Johnson ability as a run defender. Tampa Bay has long been a team that is stout against the run, and Johnson will fit right in with that mindset.

Lovie Smith got his first free agent signing right. He got a young, good defender with plenty of athletic upside. Best of all, the team didn’t overpay to bring him in. the new look Buccaneers acquired a young cornerstone for their defense who should be productive for years to come.
Comment Form is loading comments...
Powered by