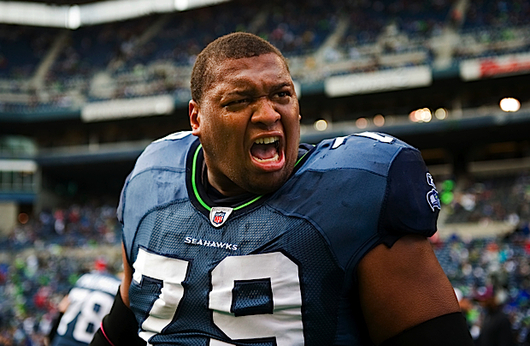 Red Bryant will be an instant, and familiar, upgrade to the Jaguars defense (Image: blacksportsonline.com)
By: Matt Harmon
March 8, 2014


How he fits with the Jaguars:

Red Bryant’s former Seahawks defensive coordinator, Gus Bradley, is the head coach in Jacksonville, so this was a natural fit. Bradley will use Bryant as that oversized defensive end in their 4-3 under scheme. Bryant was smart to head to a team with a coach who knew just how to utilize his unique skill set.

The Jaguars tried to fit former first round pick, Tyson Alualu, in that role, but he was a stop gap solution only. He was decent against the run, but didn’t offer the occasional power and push that Bryant does.

The Jaguars will instantly become a better team defending the run now that Red Bryant is in the fold. The Jaguars got surprising interior production from Sen’Derrick Marks, and will have a healthy Roy Miller this season. Both will benefit from Bryant commanding two blocker’s attention.

With the oversized defensive end role filled, the Jaguars will now turn their attention to finding a LEO. They could look to do so in the draft, or to mine the free agency market.


What he leaves behind with the Seahawks:

The Seahawks chose to part with Bryant due to his high salary cap figure, but there is no way they will not miss him. As it stands, they do not have anyone on the roster that can do what Red Bryant did for them. Perhaps a guy like Clinton McDonald, if re-signed, could play more snaps outside, but he is best as an interior rusher.

It will be interesting to see how the Seahawks go about replacing Bryant. His role is so unique that they may just remodel their defense without him. On the other hand, they could look to add a five-technique type defensive end. There will be a few options in free agency. Perhaps at the end of the first round they look at a player like Ra’shede Hageman as a potential solution.

The clear strength of the team during their Super Bowl win, the defensive line is fast becoming a big need for the Seahawks. Red Bryant was first, and Michael Bennett is set to depart in free agency as well. Chris Clemons might be served with walking papers soon, as well. Its not time to panic, but times are beginning to change in Seattle.

Source tells @FOXSports1 that 4-year, $17M deal DE Red Bryant signed with @jaguars could reach $22M if he plays through length of contract

This is the first smart, and fair deal of this year’s pre free agency signing period. Bryant might be a bit of a specialty player, but his impact is so easily felt. $17 million over four years is quite a bargain compared to his last deal. Even if he gets the escalators to take it to $22 million, the Jaguars are still getting a fair price.

When teams can run the ball on you with ease, your entire defense often gets easily deflated. Even at this stage of his career, Bryant can essentially destroy one side of the field’s worth of running lanes on his own. The Jaguars are getting an instant impact defender, and for a pretty modest price.

It is clear Bryant will be a valuable piece for this defense in 2014. His presence will open things up for other defenders. Linebackers will have less traffic to deal with, and Marks, Alan Branch, and a few future additions will find their path to ball carriers much easier with Bryant occupying multiple blockers.

Another benefit to signing Red Bryant is that he is the type of player who will age well. Big run stuffing lineman can often play into their late thirties. Bryant might be an impact player for many years in Jacksonville. Even if his quickness is compromised, his sheer size and power will still make him a valuable contributor.

The Jaguars got a centerpiece for their defense that will contribute for several years. Add in the fact that they were already familiar with him, and he came cheap, and this is a perfect signing.
Comment Box is loading comments...
Powered by