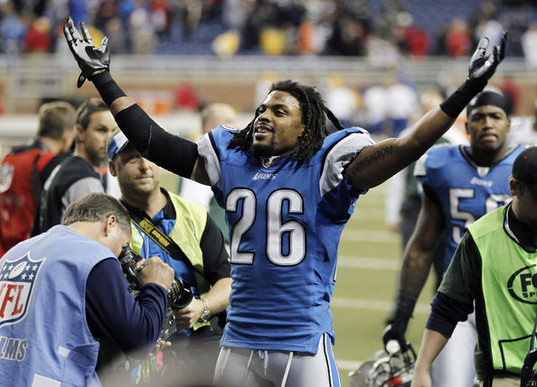 Louis Delmas will try to stay healthy while being an impact player for the Miami Dolphins (Image: blacksportsonline.com)
By: Matt Harmon
March 10, 2014


How he fits with the Dolphins:

At first blush, this seems like an odd fit. The Dolphins were rumored to be in the mix for Jarius Byrd since they were going to lose Chris Clemons; both true centerfielders at safety. The signing of Delmas obviously negates that, but he isn’t so similar to those players.

Louis Delmas is a physical and aggressive safety who has played very well throughout his career. However, he isn’t a guy you want in deep coverage with much regularity. Delmas once said, “I’ll pass up an interception for a big hit.” And that’s pretty indicative of how he plays the game. Things have only gotten worse for Delmas deep down the field as his career has gone on. He has an extensive injury history, and that has likely played a role in his decline.

The Dolphins’ other starting safety, Reshad Jones, was given a contract based off his great play prior to 2013. Jones looked pretty bad last season, and is another safety who doesn’t defend the deep area all that well. With two safeties who have such limited range, the Dolphins are going to have to be very specific with their coverage.

Even though playing Delmas and Jones might be a bit redundant, this is smart signing at a need area. Delmas has his issues, mainly health related, but he can still be a reasonably effective player. It will be up to defensive coordinator Kevin Coyle to make sure the pair is used correctly.


What he leaves behind with the Lions:

The Lions elected to part with Delmas, and have already begun to make plans to replace him. Apparently the Lions might move in on T.J. Ward, according to NFL.com. Ward would be a natural replacement for Delmas, and would compliment Glover Quinn very well.

Delmas is a good player, and the Lions will miss his playmaking ability and his aggression. He certainly helped set the tone for them.

On the other hand, the Lions clearly grew weary of paying such an unreliable player. Its also likely the new coaching staff was ok moving on from a player whose playing style obviously was in line with the reckless nature the previous regime had allowed to fester.

Detroit will miss some aspects of Delmas, but his departure won’t break them. He is replaceable.

I like the Dolphins signing Louis Delmas to a 1-yr, ~$3.5M contract. Fair value, low risk for a solid starting safety.

This is probably the best part of this move. Last offseason, Miami recklessly handed out big contracts to players who really didn’t fit their needs. Delmas fills a need area for the Dolphins, and they wisely didn’t overpay for his services.

Given his injury issues, Delmas was always going to get a short, “prove it” contract. The Dolphins gave him that, and at a pretty modest price.

There is every chance that Delmas could stay healthy, play well this season, and be in line for a much bigger payday next offseason. For one year and about $3.5 million, it’s certainly a worthwhile investment for Miami to find out.

With two safeties who lack ideal range in coverage, the Dolphins will have to have to use passive, and off man coverage; they cannot afford to have their corners press and be aggressive. Neither Delmas nor Jones is the type to clean up mistakes in coverage that happen in front of them. For that reason, one of them is very likely going to be caught in bad positions frequently in 2014—as Jones was last season.

If Delmas isn’t hung out to dry, or asked to be a centerfielder he could really excel on this defense. Of course, it will all come back to health for him.

If he stays healthy, this still young player could be at a point where he can turn his career around. Doing so would allow him to be a much more valuable commodity next offseason.

The fit might not be ideal, but overall, this is a signing with a lot of upside, and not too much risk for the Miami Dolphins.
Widget is loading comments...
Powered by