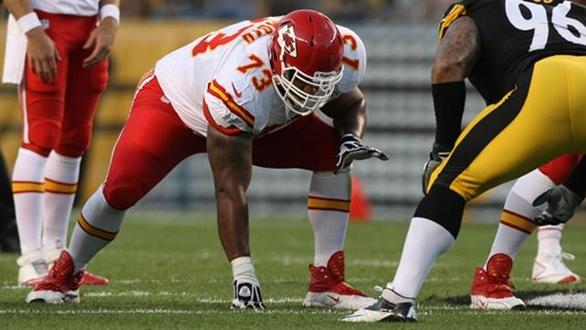 Jon Asamoah will once again be a starter now that he is an Atlanta Falcon (Image: footballsfuture.com)
By: Matt Harmon
March 12, 2014

How he fits with the Falcons:

The Falcons were tasked with rebuilding both their offensive and defensive lines this offseason. Signing Jon Asamoah is a nice first step on the offensive side.

The former third round pick will step onto the roster, and close the revolving door at right guard. Asamoah’s time ran out in Kansas City, but he can still be a solid starting lineman.

One area where Asamoah won’t be of much help is the run-blocking department. He is not the strongest player, and struggles to anchor against interior defenders. One of the reasons Schwartz took his job was the upgrade he offered as a run blocker. Steven Jackson might not find many more holes than he did during his average 2013 campaign.

On the other hand, Asamoah will really improve Matt Ryan’s interior pass protection. Peter Konz, in particular, was rag-dolled on numerous occasions last year, and Ryan struggled at times with bodies around him. Asamoah is much better at stonewalling interior rushers than he is pushing them in the run game.

The once great passing attack will no doubt benefit from this free agent signing. Right tackle, Lamar Holmes, will also find life a little easier with Asamoah in the fold. Tackles often feel more comfortable when they trust the guard next to them. With a better player to his left, Holmes might feel more confident that his new teammate will clean up his mistakes.

The former starter fell out of favor with the Chiefs after struggling in the health department. Fellow free agent Geoff Schwartz replaced Asamoah, and made him irrelevant.

Nevertheless teams just don’t wave off losing young, talented players with starting experience. Now that Schwartz has left Kansas City as well, the team will be left with Jeff Allen—a mediocre starter—and nothing else at the position.

The Chiefs might not think so at the moment, but losing Asamoah won’t be fun. I had them take a guard in my pre free agency mock draft, and that just might happen. If they want to keep Alex Smith on the right track, and still revolve around Jamal Charles on offense, they’ll need to add to the interior of their line.

Even though he fell out of favor in Kansas City, and didn’t live up to his early career promise, the Chiefs will miss what Asamoah could have been. It’s a shame when things don’t work out and a team loses a young player with talent.

This is pretty decent money for a starting caliber guard, and $4.5 million a year is certainly a fair price for both sides. The Falcons couldn’t make any more of a financial commitment to a player who was benched by his former team.

The contract really is telling as to what kind of player Asamoah is. He is a starter, but not a high end one, and likely won’t receive any Pro Bowl recognition. Good move by Thomas Dimitroff and company to correctly value a free agent on the open market.

Jon Asamoah will likely be a part of the Falcons’ offensive line for the next several years. He is still very young, and could even see a spike in his play now that he is in a new environment. Their new right guard will certainly make life easier on Matt Ryan right away, and if he gets stronger, could improve as a run blocker down the road.

The Falcons found themselves a reasonably priced upgrade on the first day of free agency. Best of all, Asamoah is a young player, who could still be ascending.
Comment Form is loading comments...
Powered by