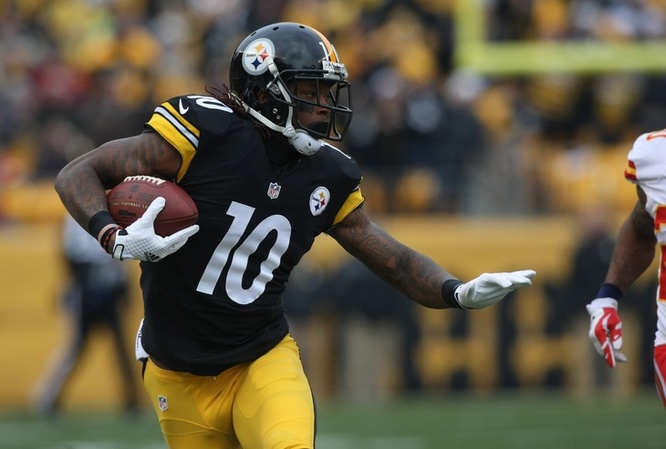 Martavis Bryant's contested catch and target data greatly affects his 2015 outlook (Image: Jason Bridge, US Presswire).
Please remember that Reception Perception statistics are meant to be in conjunction with each other in order to paint a full picture of a wide receiver’s game. With in mind, do regularly refer to the featured player’s Success Rate vs. Coverage scores throughout this piece to better capture their performances from 2014. 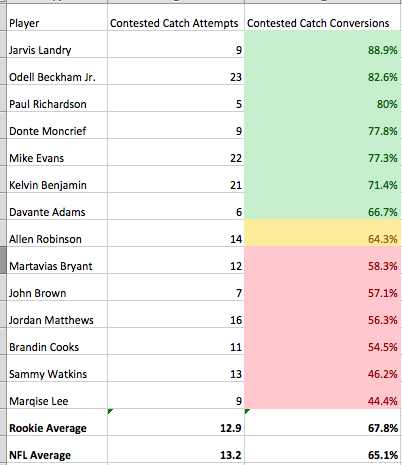 Mike Evans – Standing tall at 6’5 and 231 pounds, while sporting 35-1/8 inch arms, Mike Evans is a monster of a man. He carries a size advantage every time he steps on to an NFL field. With those dimensions, you expect the player to be a natural at winning contested catches. Indeed, Mike Evans combines length with strength to own those situations. The Buccaneers’ rookie posted a 77.3% conversion rate on 22 contested catch attempts in 2014. Given that his SRVC against man coverage qualified as “average”, it is vital that Evans wins contested passes. His sterling performance in this category answers those questions.

Jarvis Landry – Similar to Mike Evans, Jarvis Landry holds a near league average SRVC against man coverage. However, Landry also posted the highest contested catch conversion rate among 2014 rookies, with 88.9%. Of course, due to his role in the Miami offense as a short passing option, he does not find himself in those situations often. He only registered 9 attempts over his Reception Perception sample. Landry’s athletic limitations are well documented, and he certainly lacks for on-field speed. This makes his sterling proficiency in winning contested catches so important. While he is quite crafty for a young player and displays solid technique, Landry will always struggle more than others to beat athletic cornerbacks. His quarterback must have the confidence to throw his way, even if Landry is well covered. An 88.9% contested catch conversion rate shows that confidence will be rewarded.

Odell Beckham Jr. – As he was in SRVC, Odell Beckham was one of the top performers in contested catch conversion rate. Beckham does not carry the big frame or presence that fellow peers like Mike Evans and Kelvin Benjamin, but he wins contested passes with ease. Size is not everything in this department, and arm length, leaping ability, flexibility and toughness can make up for a lack of height or weight. All of which are strengths of Beckham’s. He posted an 82.6% contested catch conversion rate, which qualified for second highest among 2014 rookies. He did outpace the leader, Jarvis Landry, in attempts 23 to 9. Not only did Beckham beat coverage at a terrific rate, he hauled in catches even on the rare occasions defenders blanketed him, or when he needed to make the acrobatic play.

Kelvin Benjamin – The Panthers’ rookie receiver is well known for his drops, but Kelvin Benjamin can win the difficult passes with tremendous ease. This makes him a frustrating player, but as yet another player with SRVC scores around the league average, it is vital Benjamin makes that negligible with strong contested catch ability. He posted a 71.7% contested catch conversion rate on 21 attempts over his Reception Perception sample. When Benjamin is dialed in, he can win balls in traffic at wild angles, and that will always keep his quarterback coming back for more.

Allen Robinson – There are several pictures on the Internet displaying Allen Robinson leaping into the air to eye-popping heights. With that burned into out brains, and the knowledge of his 6’2 and 210 pound frame, the assumption would be that he would be one of the best performers in contested catch conversion rate. However, Robinson’s score fell right in line with the charted NFL average. Of course, average does not indicate poor ability in this facet of the game, but it was still a surprising score. What this really illuminates is that despite a big frame, Robinson wins with excellent separation skills, rather than play in traffic. The Jaguars soon-to-be star receiver is a classic example of a “big receiver who wins in the small game” (hat tip to Josh Norris of Rotoworld). While Robinson has the athletic traits to improve his contested catch conversion rate, he does not need dramatic improvement to become a high-end starting receiver. He already combines burst, and surprisingly strong technical work, to separate from defenders with ease.


Paul Richardson – Given he only had five contested catch attempts over his Reception Perception sample, it was hard to award Paul Richardson with a superlative. Even though his 80% conversion rate is quite impressive. As Allen Robinson is a big body that does not necessarily dominate in contested situations, Richardson is a diminutive receiver who does excel in traffic. If Richardson does return to the field with diminished speed, due to multiple torn ACLs, at least we know he can make contested catches to supplement his game.

Jordan Matthews – The Eagles second year receiver presents a difficult evaluation for many. Jordan Matthews is a big receiver, standing at 6’3 and weighing in over 210. He looks like a Brandon Marshall type of player, and clocked much better in speed measurements. However, what Matthews has always failed to demonstrate is the ability to play up to those dimensions in traffic down the field. This manifested itself in a below average 56.3% contested catch conversion rate. Matthews’ SRVC data displayed just how well he capitalizes on the opportunities he gets underneath in his designed role in the Eagles offense. And yet, his poor contested catch conversion rate, and below average SRVC score against man coverage lend credence to the idea that he cannot be a successful regular contributor outside. This does not disparage Matthews as an NFL receiver, he’s a personal favorite, but his performance on contested catches does need to improve.

Martavis Bryant – A rookie season full of dazzling plays has many observers wringing their hands in anticipation of Martavis Bryant’s encore. His SRVC score against man indicated that he could sustain his strong performance, even in an expanded role. On the other hand, his below average contested catch conversion rate of 58.3% raises some concerns. This score was rather surprising. Bryant is a big-bodied pass catcher, one whose highlight reels show many tough catches made in traffic. And yet, the misses do exist. Without diligent tape study, it is easy to miscast Martavis Bryant as a no-brainer red zone dominator, and contested catch maven. Statistically it does add up, as he was one of the most efficient receivers at collecting fantasy points per target inside the 20. However, there are real reasons that he was inactive early on in his rookie year, nor produce much at Clemson, and committing gaffes in traffic is one of them. Much of Bryant’s value will revolve around his ability to create touchdowns. If he does not correct some minor hiccups in contested situations, his already unsustainable scoring rate could come crashing down to Earth in future years. On the other hand, of those near misses, and they were very near, begin to go his way, this could be a special player. Bryant needs to show improvement, for that to occur.