Head coaches are often known as type A personalities. They want complete control over their program and believe they are always right. It is this stubbornness that can also be the undoing of a number of head coaches.

For example, we will look at the success and failure of two head coaches. When Eric Mangini became the head coach of the Jets in 2006 he decided to implement all of his defensive schemes and system. He had great success with a 3-4 scheme as a coordinator in New England and decided to bring that to New York. He moved the Jets from Herm Edwards 4-3 scheme to the 3-4 despite the fact that many of the players were poor fits in this new scheme. High picks like DT Dewayne Robertson and MLB Jonathan Vilma were essentially wastes in this defense. The Jets never successfully made the transition to the 3-4 and Mangini did not last long in New York.

The next example is head coach Mike Tomlin. When he was a surprise hire by the Steelers in 2007 there was concern that as a Tony Dungy disciple he would change the Steelers aggressive 3-4 zone blitz scheme to his style of soft coverage Tampa-2. Tomlin wisely checked his ego at the door and kept a good thing going with the Steelers perennially top ranked D. The results from Tomlin’s choice are obviously good ones as he has won a super bowl with this team and has never had a losing season. By not implementing his own system and not being stubborn he has gone on to have success.

This topic is relevant to discuss because we are seeing a recent example of a more small-scale stubbornness derailing a team today. Current Jets head coach Rex Ryan finally benched the horrific Wayne Hunter as the teams starting right tackle. Hunter ascended to the starting lineup after longtime RT Damien Woody retired. He was dreadful last year and was a complete liability in protection and run blocking. Despite this the Jets did not upgrade on him and even gave him a contract extension. Somehow, Hunter has looked even worse this preseason and was easily the worst piece on a putrid Jets offense. Now, in his place, the team will start third year offensive tackle Austin Howard. Howard was undrafted out of Northern Iowa in 2010 and has never started a game in his career. It is unlikely Howard could possibly be much, if any, of an upgrade over Hunter. Hunter clearly needed to be off the field as he was hurting the team, but inserting a player like Howard shows the team was unprepared. When teams and coaches show a stubborn commitment to a struggling player like Wayne Hunter the results are almost always disastrous for them. With out a strong blocker at the right tackle position it seems as if it will be difficult for the Jets to run their ground and pound offense.

The Jets offense seems destined to struggle this year either way. However, the coach’s stubborn approach with keeping Hunter as a starter is a big reason their season could before it begins. Let this be a lesson for head coaches everywhere in the league.

Breaking Down the Arizona Offense 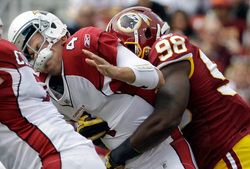 We talked about another ugly offense yesterday with the New York Jets yesterday and today we examine another in Arizona. I had the Cardinals ranked number 17 in my season preview power rankings and after watching them last night, in their preseason game against the Titans, I feel like that may have been too high. My thought was that benching Kevin Kolb and inserting John Skelton as the starter would be able to get enough out of him to win games and rely on an up and coming defense to keep them in games. Now I am not sure the rest of the offense can even be competent to mask a quarterback deficiency.

Lets start with the positives. There is Larry Fitzgerald and he will always be a reliable superstar. He has not regressed at all since signing a massive deal last summer and he can make up for poor quarterbacking to an extent. Fitzgerald is a massive target who can snag balls out of the air and is a nightmare for defensive backs to cover. The other positive is the emergence of Ryan Williams. The second year running back had his entire rookie year wiped out due to a nasty patella tendon injury; one that some players take a year to return from if they ever do. However, Williams has looked very good this preseason. His talent is very easy to notice when he runs. He is a tough runner who knows just when to hit hole and make defenders miss. What sets Williams apart though is his vision. A running back’s vision is the most overlooked aspect of success at the position, but when you see a player like Williams run by defenders and make his cuts you can see the difference it makes. If Williams continues to look this good in the regular season, he will pass the fragile Beanie Wells on the depth chart and the Cardinals may have another player they can lean on in their offensive arsenal.

Of course the negatives of this unit outweigh those two players. The most glaring holes are on the offensive line. Left tackle Levi Brown has been a disappointment in the NFL after being picked fifth overall in 2007, but after he tore a triceps muscle a last week we have seen how poor the depth behind him is. The Titans front constantly harassed the likes of second year player D.J. Young and veteran journeyman D'Anthony Batiste all night. Neither seems truly up to the task of starting. At right tackle there is Bobby Massie and Jeremy Bridges, who are similar to their counterparts on the left a rookie and a journeyman. The problems at tackle are extensive and will not be going away. On the inside they have Daryn Colledge, Lyle Sendlein, and Adam Snyder. Colledge and Snyder are veterans who flamed out with their original teams and Sendlein is a solid all around player. This unit is one of the weakest in the league and will hold back the rest of the players on this offense.

Another problem is that Malcolm Floyd has been slow to develop. Floyd was drafted in the first round this year to take pressure off of Fitzgerald and take advantage of single coverage. The problem is Floyd has not been able to move up the depth chart and looks unprepared to contribute early. He is a big target with a similar skill-set to Fitzgerald, but if he cannot contribute this year the offense will have to rely on other guys to step up to help the QBs. Which brings us to the biggest issue. Kevin Kolb still does not handle pressure well (a huge problem behind this line) and makes poor decisions. One of his two interceptions was one of the worst I have seen and look telegraphed right to Titans MLB Colin McCarthy, who returned it for a score. His signing looks to be a massive error by this staff. Skelton, despite being more physically talented, does not seem to be much of an upgrade. He was harassed by the Titans d-line last night and did not respond well. He also did not do the little things very well. He did not look Larry Fitzgerald’s way often enough and never really moved the offense. This position does not look like it can be settled by the options currently on the roster.

Overall this teams issues on offense are plentiful and could be the undoing of this team. When Ken Whisenhunt and Russ Grimm were hired from the Steelers in 2007 the vision was that they would fix the offense, and especially the o-line. Kurt Warner temporarily made it look like the coaches had been successful in their endeavor, but since his retirement this unit has been a disaster. It makes you wonder if this staff can really make this into a winning unit without getting lucky as they did with Warner. Also adding Kolb and Floyd both came at the request of Fitzgerald. Taking the advice of players usually is ill advised and clearly has been a problem for this team so far.

Arizona has a good defense with a good mix of young and veteran players. However, outside of Larry Fitzgerald, and maybe Ryan Williams, it still looks like there are not enough players to count on with this team. If the offense does not take a step forward than I could have over rated this team.


Image courtesy of: http://bleacherreport.com/articles/1003707-arizona-cardinals-kevin-kolb-offensive-answer-or-injury-prone-disaster
Powered by