Reception Perception: Keyarris Garrett is a unicorn in this year’s draft class 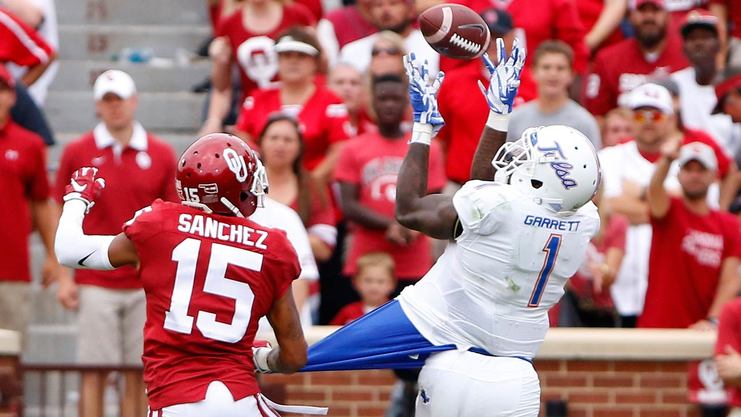 Tulsa's Keyarris Garrett stands out as one of the few late round upside proposition this class has to offer us (Image: USA Today)
The 2016 wide receiver draft class is weak. You’ve heard it time and time again, and will continue to hear it, in the lead up to April’s big event. My personal opinion is that the class is not as bad as many make it out to be. It’s all a matter of perspective.

While this year’s draft class is littered with a number of potential quality contributors, it lacks the sex appeal of the previous two receiver prospect groups. The 2014 and 2015 rookie classes, from top to bottom, were stock full of players who could develop into an NFL team’s No. 1 receiver. The 2016 iteration does not come with such promise.

While that lack of sex appeal is quite prevalent in a group of players projected to go in the first two rounds that you can say lack upside, it’s even more striking in the lack of many size/speed upside projects late in the draft. There just aren't many projected late round big receivers with strong athletic ability that teams will draft with “if everything hits…” mentality. One exception to this scarcity could be Tulsa’s Keyarris Garrett.

Checking in at 6’3 and 220 pounds, Garrett carries the build of a classic split-end receiver and stands out in this class. He clocked in a solid 40-yard dash for his size with a 4.53 and took his broad jump 128”. There’s definitely some traits that make Keyarris Garret intriguing, especially in a class bereft of late rounders with that title. Yet, we need to look at his Reception Perception to see if there is enough evidence to imagine he translates it to the field.

In line with a theme becoming more prevalent out of college prospects in the last few years, Keyarris Garrett mostly stuck to one receiver position in college. For 97.6 percent of the snaps in his Reception Perception sample, Garrett lined up at the right side of the field. On 69.7 percent of the plays, he was aligned on the line of scrimmage.

Leading the country in receiving yards this season, getting the ball in Garrett’s hands was clearly a priority for the Tulsa offense. His quarterbacks targeted Garrett on 38.6 percent (third highest rate in the class) of his 184 routes run in this sample, and he caught a pass on 25.5 percent of them. Despite oddly small hands for his size, he had a fine drop rate of only 2.8.

In order to accomplish the goal of repeatedly getting the ball to him, the team had Garrett run a number of high percentage routes. If you’re familiar with Corey Coleman’s limited route tree, you’ll recognize Garrett’s work. His now head coach, Phillip Montgomery, was previously the offensive coordinator at Baylor. Not surprisingly, much like Coleman, Garrett comes with limited route diversity. 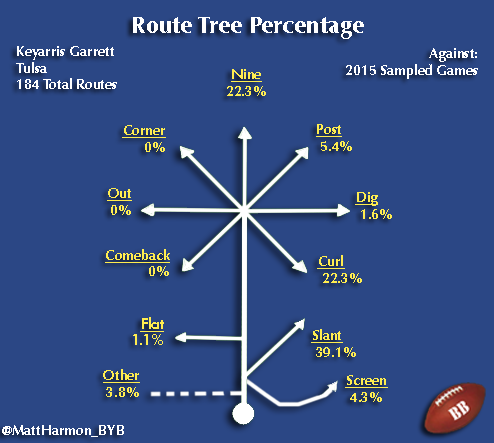 Two routes dominate the usage here. 61.4 percent of the 184 routes charted over his Reception Perception sample were either slants or curls. Add in his nine routes, and the number jumps to three routes accounting for 83.7 percent of Garrett’s chart.

The only other route that Garrett ran on more than 5.0 percent of his patterns was the post. A projected late round pick, he’ll require time with an NFL coaching staff to learn how to diversify his assignments. However, with Garrett’s size and speed, he could provide rather quickly on just those three routes.

When analyzing deep threats’ usage, I often find that for me, they break down into two branches from the same tree. There are the Kenny Stills versions, and the Mike Wallace versions. Both are obviously field stretchers who run a high percentage of nine routes, but the two types differ in where they function best outside of the vertical pattern. When not running a nine route, much of Wallace’s use comes on curls and crossing patterns. Devin Smith’s Reception Perception last year showed he fell along that type of field stretcher archetype.

While Kenny Stills presents the same blazing speed as Wallace did in his prime, he doesn’t function as well on slants and curl routes as players like Wallace or Smith. Rather, Stills makes his living producing on sideline-breaking routes like corners, outs, flats and improvisational patterns. Those routes are of the variety that take great accuracy to hit from a passer, and are of a higher degree of difficulty than the slant or curl. Perhaps that’s why Stills functioned better with a more precise quarterback in New Orleans, and did not immediately replace Wallace in Miami. 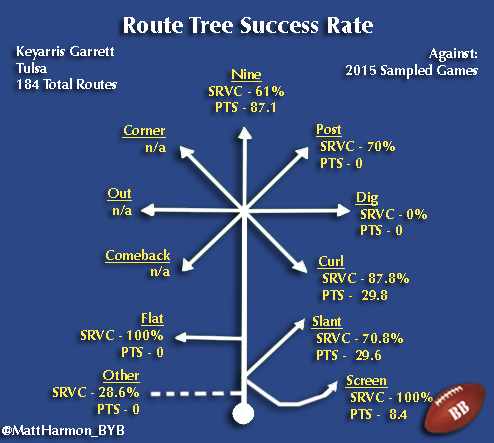 Garret’s ability to get deep shows up on his nine route scores. His SRVC of 61 percent was above the class average, and the eighth highest mark among the charted rookies. Even at 220 pounds, Garrett possess the straight line speed to blow past defensive backs. His long limbs allow him to gobble up cushion and take longer strides than most of the smaller defenders in the secondary.

He also has the finishing touch to win difficult passes. Garrett’s 72.7 percent contested catch conversion rate ties him with Kenny Lawler for the fourth best mark in the class, behind only top prospects Josh Doctson, Laquon Treadwell and sleeper Michael Thomas of Southern Mississippi. Unlike some developmental big receivers, Garrett knows how to use his frame in traffic and down the field.

As outlined in the Wallace archetype, Garrett makes his living underneath on simplistic routes for his quarterback to hit. His 87.8 percent SRVC on curls was the best mark for any receiver on that pattern. Being able to cut back to the quarterback on curl routes, when defenses are worried about you going over the top, is a great skill to have for Garrett’s type of wide receiver. He does, however, need to work on his slant routes. They were his most frequently run route, but he finished with a below average score there. A 70.8 percent mark isn’t a damning SRVC number, but he does have a tendency to get sloppy on that particular pattern. Garrett doesn’t display elite quickness, or at least doesn’t know how to consistently hone it yet, which also factors in here.

Great scores on nine and curl routes make Garrett an easy projection in the deep game. At worst, and perhaps even early in his NFL career, Garrett can assist a team in the vertical passing game. Without asking much, he’ll threaten defensive backs down the field, but offers the ability to break back to the quarterback, as well. That alone makes him intriguing in this class.

Keyarris Garrett’s overall Success Rate Versus Coverage scores just about perfectly encapsulate him as a player.

Garrett scored well in defeating man coverage with a 68.6 percent success rate. A positive indicator in his future projection and a reminder of Garrett’s physical advantage against his competition. He also gets free from press attempts more often than not with a 67.9 percent SRVC.

The trouble in his evaluation comes from his poor score against zone coverage. Garrett’s 69.9 percent SRVC against this brand of defense was below the class average and the fourth lowest among the charted prospects. Unlike Coleman, who appeared to pick up extra nuances in reading coverages playing in Baylor’s offense, Garrett doesn’t appear to have that same prowess. He tends to get lost in zones, and doesn’t often find the correct spot to sit down in.

Now, this theory is just my personal hypothesis, but it looks like Garrett needs some cleaning up in regards to his technique and mental approach to the game. Sometimes he gives off the vibe as if he’s thinking too much, not enough, or just doesn’t know some of the small nuances of the position yet. His poor scores in getting free from zone coverage highlight that, but so does his work after the catch.

For a player with his frame and speed combination, it just makes so little sense that Garrett was “in space” (in the open field with room to run) on 15.8 percent of his routes, but dropped on first contact on 69 percent of those attempts. That was the third highest rate in the class, behind only Aaron Burbidge and Tyler Boyd, both of whom are far worse athletes than Garrett.

So many times when watching him, you’ll see Garrett run towards a defensive back, always much smaller than him, in good position to make the man miss or power through him, only to be brought down with ease. Frankly, it was weird, especially how it happened so painfully frequently. Again, it’s not an athletic ability issue, although his long arms and wiry legs do make him an easy target to cling to. Garrett just doesn’t know how to set defenders up, or properly understand angles to put himself in favorable positions to break tackles.

The good news here is that Garrett’s struggles in setting defenders up and understanding zone coverage are teachable issues. The Tulsa product has much to learn in advancing to something close to a professional level of a nuanced approach to playing the position. Of course, that is what makes him a mid to late round prospect despite leading the nation in receiving yards. He can develop in both regards, but it will take time and commitment from both him and his new team. Unfortunately, that’s not something all late round receivers get.

However, Reception Perception overall paints a clear picture that Keyarris Garrett is a player worth that developmental time. In this class that lacks upside, and where most of the project players can only end up as longterm slots and flankers, he’s something of a unicorn. Garrett is the rare beast in this draft class that “if everything hits” he could develop into a team’s split-end receiver.

Garrett’s size, speed and legitimate upside are real. His SRVC scores on curl and nine routes at least assert that he can quickly become an asset for a team searching for a deep threat along that Mike Wallace archetype. There’s great value in that ability, and would more than give the team that drafts him a return on investment even if that’s all he ever brings. The fact that there is even more to mine here is what makes him the unicorn of the late rounds.
​
Only time will tell if Keyarris Garrett lives up to the complete upside his physical ability foretells us he has. Yet, there’s no denying that he is a unique entity in this draft class for even giving us the opportunity to imagine a high ceiling for him to hit.
Comment Form is loading comments...
Powered by