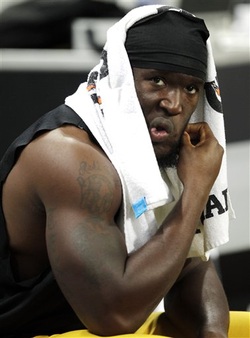 After last weeks games it was revealed that the Washington Redskins are going to lose two of their defensive starters for the rest of the season. Brian Orakpo tore a pectoral and Adam Carriker tore a quad in his right knee. These injuries likely change the entire trajectory of Washington’s season.

First lets start with the injury I am less concerned about. Adam Carriker is the starter at left defensive end in their 3-4 scheme. Carriker has certainly turned his career around in Washington after being a massive bust in St. Louis, as he is much better suited for his role in Washington than he was as a 4-3 defensive tackle for the Rams. However, he is probably just an average player. Stepping into his role will likely be 2011 second-round pick, Jarivs Jenkins. Jenkins had a strong preseason last year before he tore his ACL and never played in his rookie season. Many Washington fans are excited about him, but he is what he is, an inexperienced player. Counting on him to come in and play as well as Carriker, who knows that scheme inside and out, may be a bit of a stretch. However, his upside is enough to get excited about and could eventually be an upgrade.

Now, for what I am scared to death of, the fallout from Brian Orakpo’s injury. Orakpo is arguably a top-10 player at his position. He has been a smidge overrated at times in his career, as he has not always been a complete player. However, in the past two seasons he has elevated his play as a run defender and is still a very good pass-rusher. Now that he is out for the season, the projected starter at his position is Rob Jackson. Who you may ask? Well Jackson has been in the league since he was drafted by the Redskins in the seventh-round of the 2008 draft. Since then he has bounced between Washington’s active roster and practice squad, collecting just one sack in the process. The drop off from Orakpo to Rob Jackson is enormous. Side note: the other player at the position on Washington’s roster is Chris Wilson, and no Redskins fans he is not good either.

The reason I bring this up is to show how depth can change an entire season. The Redskins, with new franchise quarterback Robert Griffin at the helm, have looked like they could be a surprise team this season. One of their strengths was supposed to be the front seven of their defense; that can no longer be considered the case. Not only will they have, for sure, one (and potentially two) lesser players, but also this will change things for the rest of the defense. With Orakpo gone teams will now be able to key on the other member of the pass rushing duo, Ryan Kerrigan. I doubt that Jackson will threaten defenses at all, so teams will likely double team Kerrigan, thus rendering him less effective. Also, this will expose what I believe to be an anemic Redskins secondary. The safeties, Madieu Williams and Brandon Meriweather, are absolutely atrocious and have been dropped by five teams between them. Also, the cornerbacks are probably an average group. Josh Wilson is a solid starter, but that is all, but DeAngelo Hall is one of the most perennially overrated players in the NFL. He gathers a ton of interceptions and other big plays, but he gives much more of those big players back to the teams they face. He gets burned far too often and is a horrific tackler. People think he is a good player because he was a top-10 draft pick, gets interceptions, and is super fast. However, he is not.

In summary, let this be a lesson to other teams. Having good players is nice, but those players get hurt. If you do not have good backups your team is certainly ready for a drop off and their season could be spoiled. Such is the case in Washington this season. These injuries have the potential to be the difference between what could have been an under the radar 10-6 team and 7-9 or 8-8 type of season.


Image courtesy of: http://www.wtop.com/41/3039969/Redskins-lose-Carriker-Orakpo-Saffold-also-hurt-
Powered by