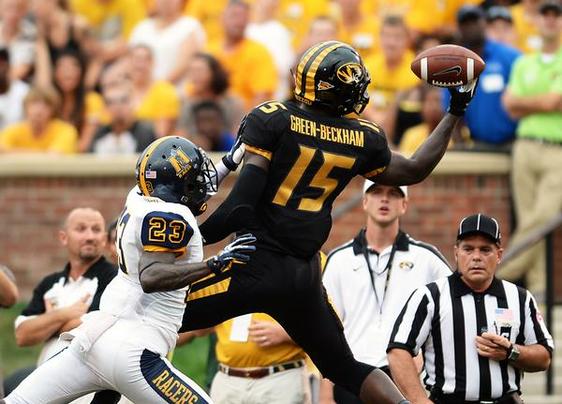 Dorial Green-Beckham comes complications, but it is hard to miss his talent (Image: NEPatriotsDraft.com)
As we get deeper into the process, it appears that the talk of this being a poor draft class at the top, will only grow louder. There does not appear to be a transformative prospect in the bunch. The task of even picking out more than a handful of strong ones comes with a fair amount of difficulty.

However, there is one player who fits the bill of a terrific, high-end NFL prospect. Dorial Green-Beckham, by way of Universities Missouri and Oklahoma, has everything evaluators look for when scouting wide receivers for the NFL. The trouble is, he also has major red flags in his legal background, and the rumors about his character are beyond damning. Did you notice he is “by way of” two schools? Green-Beckham was dismissed from Missouri in the wake of multiple drug-related issues, and a domestic incident charge. He promptly transferred to the University of Oklahoma, but never played a down before declaring for the NFL Draft.

Keeping the character concerns in mind are vital if you’re in the business of predicting when a player might hear his name called during the NFL Draft. That is not, nor has it ever been, the goal of Reception Perception. That part of his NFL projection evaluation is very important, but will not be taken into regard here. As always, this methodology will strip away the noise, and focus solely on the player as an individual entity on the football field. When you indulge in that exercise, you will find yourself caught up in the siren song of his enormous talent.

Disclaimer: usually a full season profile of Reception Perception works through eight games of a receiver. Unfortunately, with the scarcity of all-22 footage available on college prospects, that was not possible. For the purposes of this profile, we’ll be working strictly off Dorial Green-Beckham’s 2013 games against Arkansas State and Toledo. I personally have watched and scouted more games of his than just these, and they are a factor in my opinion. However, all Reception Perception figures cited in this article will be exclusively taken from the cited games.

Dorial Green-Beckham is a physical specimen. Listed at 6’5, with a lean 237-plus pound frame and long arms, the mercurial wideout was cut from stone to play the position. From a pure size, dimensions, and skill set standpoint, Green-Beckham is along the same archetype as Julio Jones, A.J. Green and the player Andre Johnson once was. As such, he plays the same receiver position.

Through out the Reception Perception series, we’ve seen that teams want their biggest, most athletic receivers in the X position. Missouri lined up Dorial Green-Beckham on the left side of the field an eye-popping 95.8% of his snaps from this two game sample. They put him in the slot on the rare occasion, but those instances were few and far in-between. The majority of his snaps (75%) saw him aligned on the line of scrimmage, as well.

An imposing physical presence on the field, Dorial Green-Beckham fits right into the mold of the traditional X-receiver. As most of his snaps took place on the left side of the field, and on the line of scrimmage, that is indeed the position he played in college.