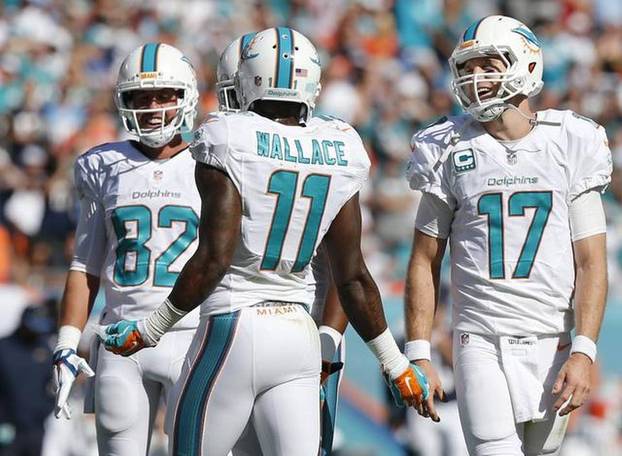 A striking amount of miscommnication existed between Mike Wallace and his former quarterback during his two years in Miami (Image: AL DIAZ/MIAMI HERALD STAFF)
Free agency brings about some of the worst decisions NFL franchises make. A select few organizations seem destined to learn the hard way that overpaying for another team’s talent, without a plan for them, rarely brings fruitful results. It seems every offseason; more puzzlingly bloated deals are handed out to role players.

One such agreement was the one given to Mike Wallace by the Miami Dolphins, prior to the 2013 season. A beleaguered General Manager in Miami handed out a five-year, $60 million deal to the former Steelers receiver. That contract was a poor one the moment it was created. Wallace was a terrifying deep threat, but showed little ability akin to a number one receiver. Yet, the Dolphins paid him as such, and the general public expected him to play like one.

The signing was a predictable failure, to the surprise of few. Now Wallace finds himself a member of the Minnesota Vikings, after a recent trade. The question for his new team is not “will Wallace bring more than he showed in Miami”. The Vikings should decide whether its wise to even ask, or expect him to do so. 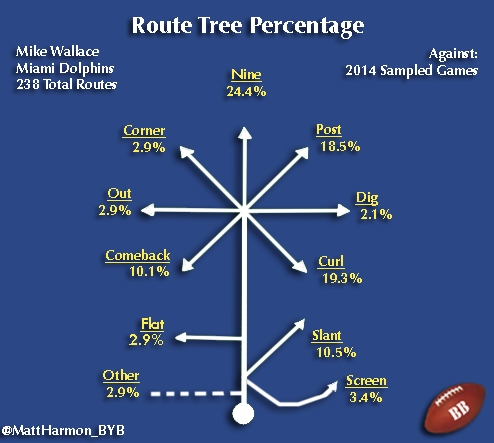 Mike Wallace’s Reception Perception Route Percentage Chart is one of the most imbalanced ones recorded to date. He ran a nine-route on 24.4% of his 238-charted routes. That’s the most frequent of any NFL wide receiver charted, at this point in the preparation of the First Annual Reception Perception Publication. Wallace’s deep speed is his best asset, and as such, it makes sense that he’d be asked to go vertical so often.

Other than the nine-route, Wallace ran few others on a consistent basis. The curl (19.3%) and post (18.5%) were well represented. He sprinkled in some slants and comebacks. However, for three patterns to account for over 60% of the routes Wallace ran over this sample speaks to just how limited he is as a technician. An offensive coordinator cannot reasonably expect to count on this player to run a wide variety of routes. Yet, that does not mean Wallace does not retain a good amount of value on the patterns he does run often. 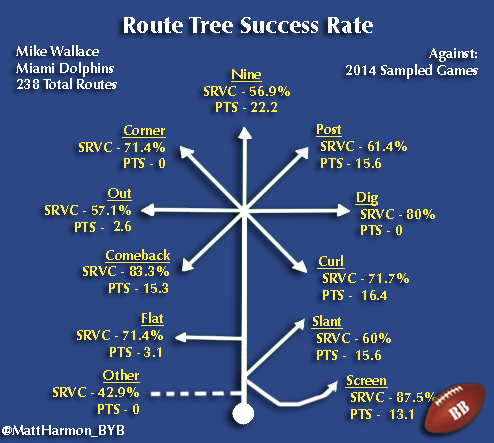 (SRVC denotes success rate versus coverage for each route. PTS indicates how many PPR fantasy points a receiver earned on each particular route)
Much was made of the miscommunications between Ryan Tannehill and Mike Wallace. Analysts can debate until the end of days about whether the quarterback or the wide receiver deserves the heavier portion of the blame. The truth is, there is enough head-scratching plays on both of their parts that you can craft a narrative on either side, depending on your agenda. Yes, Ryan Tannehill is an average, to below-average deep passer, and it was striking how those issues were amplified when he targeted Mike Wallace. However, the goal of Reception Perception is to strip outside factors away, and solely evaluate the wide receiver.

Given that he was asked to run a nine on 24.4% of his routes, Wallace’s SRVC of 56.9% is acceptable. Yet, with his scary speed, you’d expect better. Wallace’s SRVC score on these patterns could be higher, but he struggles to track the ball, and therefore he gets himself tangled trying to locate the deep passes. Its also rather disappointing that Wallace only amassed 22.2 PTS on nine-routes. Compare this to Mike Evans, who ran nines on 20.4% of his routes: 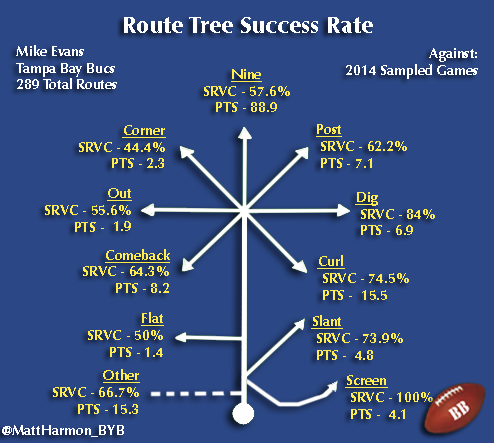 Evans’ SRVC score was only slightly higher than Wallace’s, but he recorded more than four times the PTS on nines. The young Mike Evans may just be a lethal vertical threat, but the disparity in this piece of their Reception Perception data speaks to just how disappointing Wallace was as a productive field-stretcher in Miami.

Beyond the lack of deep ball completions, Ryan Tannehill struggled to connect with Wallace in general. Misses such as these were far more concerning, and just as prevalent:
Being such a frightening receiver, with legitimate pad speed, Wallace often receives plenty of cushion from cornerbacks. To his credit, he knows this and breaks off straight-line routes into a curl or comeback. This gives him miles of separation from defenders; such is the case in this play. However, Tannehill was oftentimes too late to see this, as he was here, or would simply never throw the ball Wallace’s way. These would be easy completions, but the quarterback left on the field.

The ample separation from defenders that Wallace earned on these plays was reflected in his SRVC scores on comebacks and curls, 83.3% and 71.7% respectively. This is where a switch at quarterback will really assist Wallace. Teddy Bridgewater is a smart player, with pristine anticipation. Tannehill was unable to have the ball to Wallace at the proper break points on these routes, if he even threw him a pass at all. Bridgewater is an upgrade in this sector of the game, and Wallace should benefit greatly.

The Dolphins only got Mike Wallace “out in space” on a paltry 5% of his routes of his 238-charted routes. That’s on the low end, and is inexcusable for such a fast chess piece. Blame for this mishap falls on the coaching staff, and quarterback. Playing with Bridgewater, Wallace should find his way into more tackle breaking chances. His new quarterback will be able to anticipate his gaining miles of separation on these curls and comebacks.

While Bridgewater is not the “bombs away” style of quarterback that Wallace thrived with once upon a time in Pittsburgh, his strengths should be of assistance to the new Vikings receiver. Honestly, the on field relationship between Tannehill and Wallace was so dysfunctional, that any new partner likely provides a better chance at a happy ending for Mike Wallace. A change in scenery also brings a decrease in expectations, which is something this player desperately needs. The contract he signed with the Dolphins inflated what some believed the team would get out of Wallace. The accusation was doomed to be a disappointment, but that does not mean Wallace isn’t a solid piece of a passing game that can provide a ton of value to his team. He posted good SRVC scores in Miami, and should have amassed better production.

Maybe he will in Minnesota.

Regardless of how he produces, Mike Wallace’s sheer presence on the football field opens things up for others. Running backs and tertiary receivers are afforded more operating room underneath, as defenses must account for Wallace’s speed. The Vikings offensive coordinator, Norv Turner, is also highly regarded for his work with deep threats, and his ability to compliment them with other offensive pieces. He certainly signed off on this trade with a few schematic ideas up his sleeve.

After considering all the factors, in light of Mike Wallace’s Reception Perception data, Vikings fans can feel better about this trade than they did upon first reporting. Still a fine player, as long as he’s viewed in the proper role and with correct expectations, Wallace is ready to contribute with a new quarterback partner more suited for him.