Reception Perception: Investigating any correlation between the results and draft prospect age 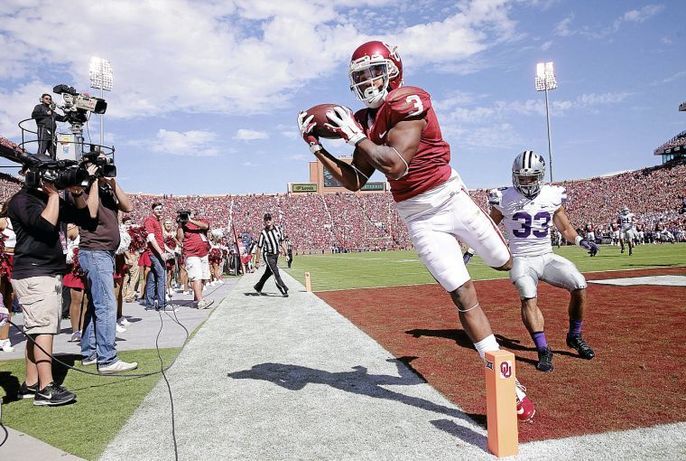 Sterling Shepard was an older college prospect who was one of the best Reception Perception performers (Image: Mike Simons/Tulsa World)
We’re lucky to have as many different voices and ideas in the world of football analysis as we do. I recently touched on that in a Reception Perception evaluation of JuJu Smith-Schuster and how it should inspire us to work together.
Within the sphere of NFL Draft analysis, there’s a sector of evaluators who emphasize and use age as a variable in projection, most of which takes place at the fantastic site Rotoviz. Of course, Reception Perception is a methodology strictly based off charting what takes place on film. Age isn’t a part of the equation for the metrics in this series.

Now, it’s important to remember that my goal with Reception Perception is quite different than many of those analysts who work with age. I’m not interested in predicting which players will be successful in fantasy football with this methodology. Using it to do so would be to paint an incomplete picture of a statistical projection. Reception Perception aims to, in some ways, quantify skill and ability, which we know is only a fraction in the equation of a player collecting statical production.

Additionally, as I stated last offseason, I have no desire to combine all of the data into an overall grade to sort by “who is or will be good.” Rather, Reception Perception is mostly interested in better understanding what each individual player is good at, rather than assigning pass or fail grades. More than anything, it’s a method with which to better log my observations from watching film to create a more honest, transparent and layered evaluation tool than traditional tape scouting. It’s just one piece of the puzzle.

Nevertheless, one question raised by the age-based evaluation community that I do find interesting is whether film watching causes an evaluator to be biased towards older prospects. Justin Winn of Rotoviz posed the question “can you see age on film” last offseason. I’ve heard other outlets suggest that because a player is older, and therefore more refined and/or athletic than his competition, the film-watcher will note them winning on the field more often. The thought is that their advanced age is one of the reasons we observe them standing out on tape more, and that leaves an impression on us.

I think there is some merit to the question. I frequently obsess about the inefficiencies and effects caused by our brain’s way of contextualizing what we see, and how that comes into play when watching film. Trying to erase those biases or at least attempt to counter them, was a big reason I created this methodology.

While I can’t answer the question for the entire tape scouting community and their methods, I can test Reception Perception’s results against prospect age to see if there is any relationship.

I ran correlation formulas on the 40 prospects I’ve charted, so far, over the last two years against their final year age. The prospect ages were taken from the 2017 class database provided by 14TeamMocker and its 2016 counterpart courtesy of Jon Moore. The metrics studied were four main components of Reception Perception: success rate vs. man, zone and press coverage, as well as contested catch conversion rate.

There proved to be almost no relationship between a prospect’s age and their success rate vs. man coverage. An ever so slight negative relationship does exist, meaning as a prospect’s age goes up, their success rate vs. man coverage goes down.
Over the last two years, Reception Perception has data on six players who were under 21 years old during their final college season. Three of the six posted scores above the 50th percentile (68.4 percent).

On the other end of the spectrum, there are seven players who were at age 23 or older in their charted season. Four of them scored below the 50th percentile in success rate vs. man coverage.

The two lowest success rate vs. man coverage scores collected over the last two draft classes were Pharoh Cooper’s 52 percent and Amara Darboh’s 53.3 percent. Cooper was one of the younger receivers at 20.8 years of age, and Darboh on the older side at 22.8.

Conversely, the two highest success rate vs. man coverage scores in the database are Sterling Shepard’s 82.8 percent and Isaiah Ford’s 80 percent. Just as with the negative scores, we see both prospects on opposite sides of the age spectrum. Shepard was an older 22.9 in his final year and Ford just 20.8.

There is just a bit stronger of a negative relationship between success rate vs. zone coverage than man, but a 0.03 difference is hardly much to make a fuss over. Older prospects are just slightly more likely to scores worse against zone coverage.
Only two prospects (out of 10) who played their final collegiate seasons at 22.5 years of age or older posted success rate vs. zone coverage scores above the 80th percentile. Those two players were Michael Thomas of Ohio State and Josh Doctson of TCU, both drafted last year.

The two highest success rate vs. zone coverage scores over the last two years belong to Carlos Handerson (90.5 percent) and Ishmael Zamora (87 percent). Henderson was 22 years old, right within the average age (21.9) of prospects I’ve charted, while Zamora was a young 21.2.
​

Of the three branches of success rate vs. coverage, press coverage shows the strongest negative relationship to final year age. Of course, it’s quite generous to use the word strong with a -0.12 correlation coefficient.
While the two best success rate vs. press coverage scores in Reception Perception prospect history, Sterling Shepard’s 91.1 percent and Carlos Henderson’s 92.6 percent, belonged to players above the average age, younger wideouts generally tend to post superior scores.

Note: One prospect (Braxton Miller) was removed from this group as he never registered a contested catch attempt in his Reception Perception sample.

Here we have our first positive relationship to age among the metrics studied. Yet, its still an overall weak one with just a 0.11 correlation coefficient.
Of the six prospects who played their final college season at age 23 or older, only Ardarius Stewart (25 percent) fell below the 60th percentile for contested catch conversion. Three of the six checked in at or above the 75th percentile. Two of the oldest prospects, Josh Doctson (85 percent) and Cooper Kupp (81.8 percent), posted the second and third-best conversion rates among those recorded over the last two classes.

Prospects on the extremely young end of the spectrum weren’t quite as strong in the contested catch game. Among the six receivers charted who played their final college season under 21 years old, four of them finished with contested catch conversion rates under the 50th percentile. However, the two who don’t fall under that umbrella, Laquon Treadwell (75 percent) and Chris Godwin (85.7 percent), checked in north of the 75th percentile. Godwin’s score carries weight, as it is the best recorded over the last two draft classes.

Towards the middle of the age spectrum is where we see the balance created. Prospects with positive scores like Carlos Henderson, Taywan Taylor and Michael Thomas (Southern Mississippi) mingle with those on the negative side like Corey Davis, John Ross and Will Fuller.

After digging through the players charted over the last two draft classes, we cannot find any relationship between Reception Perception results and prospect age. While this does not speak to other film evaluation methods, perhaps their methods do hold an age bias as others suggested, we can at least confidently conclude that the Reception Perception is not biased toward older or younger prospects. When testing age against some of the methodology’s primary metrics, weak correlation coefficients appeared across the board.

The research presented here does not discredit the value of age as a projection tool, at all, nor does it intend to. Rather, we just see that no relationship exists between positive Reception Perception results and older prospects. I'm confident my methods hold no age bias. With the evidence in the databases over the series' existence, I see little evidence to suggest the metrics should be adjusted for age.
If you’re interested in more Reception Perception analysis, make sure to visit ReceptionPerception.com for complete college prospect evaluations and pre-order The Fantasy Footballers Ultimate Draft Kit for access to 50 NFL players’ full data this summer. You can keep up with all of the work using the #ReceptionPerception hashtag on Twitter.
Comment Form is loading comments...
Powered by