Reception Perception: Randall Cobb Made the Right Call Sticking with the Packers 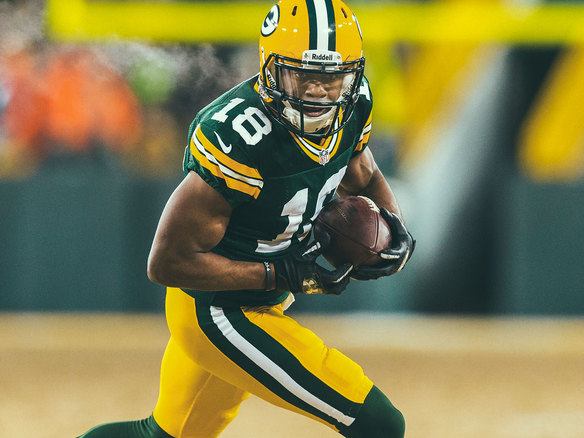 Randall Cobb decided against changing teams when he re-signed with the Packers over the weekend (Image:Jeff Hanisch - USA Today Sports)
The news came down this weekend that coveted free agent receiver, Randall Cobb, was re-signing with the Green Bay Packers. Widely regarded as the top pass catcher on the market, it appears Cobb took a discount to stay with his original team on a four-year, $40 million deal. Coming off a career year, in which he posted 91 catches, 1,287 yards and 12 touchdowns, one could argue this 24-year old player should have chased the money on the often alluring open market.

But if his goal is to sustain the level of production he’s had the last three seasons, he made the right decision.

In the eight games sampled for this Reception Perception study (the four best and worst statistically), Randall Cobb played in the slot on 82.1% of his 431 snaps. He was attached to the line of scrimmage on 65.2% of his plays. However, to categorize him as a traditional slot receiver would be a mistake. Mike McCarthy and his coaching staff do an excellent job maximizing Cobb’s abilities. 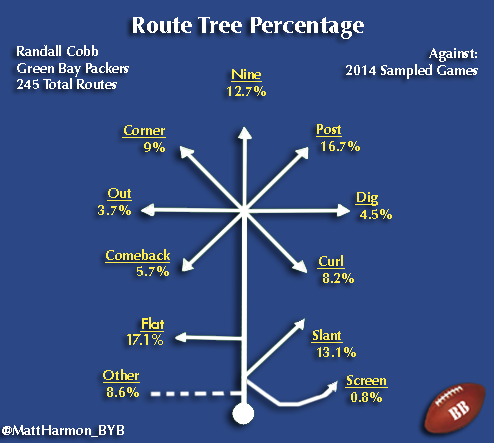 Cobb ran a qualifying route—one where he could have reasonably been expected to catch a pass—245 times over the eight-game sample. His most frequently run routes were the flat (17.1%), post (16.7%) and the slant (13.1%). However, Cobb’s Route Percentage Chart is fairly balanced, compared to his peers at the position. No pattern was charted as being run at an over 20% frequency rate. While Cobb was not much of a factor in the screen game, his route tree provides a better than average amount of diversity. Such balance also translates to how often he was successful at getting open on each type of passing pattern