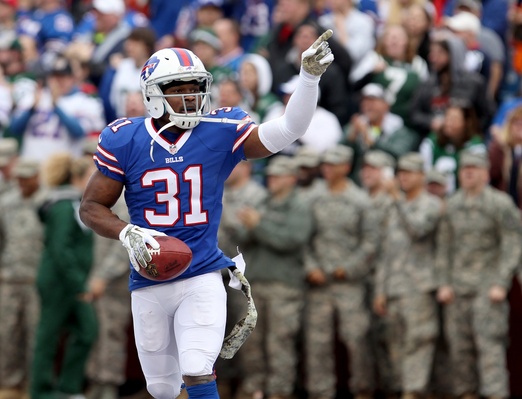 The New Orleans Saints made a clear "live for today" type move by signed Jarius Byrd to a big deal (Image: sporttrac.com)
By: Matt Harmon
March 17, 2013


How he fits with the Saints:

Jarius Byrd is well known as one of the best ball-hawk safeties in the NFL. He will fit in seamlessly with Rob Ryan’s aggressive defense in New Orleans.

The Pro Bowler will replace departed starter, Malcolm Jenkins. Byrd is an upgrade in every sense of the word. He is a superior player in coverage, and doesn’t shy away from physical football like Jenkins. The two just are not comparable players.

Jarius Byrd will play alongside the Saints’ 2013 first round pick, Kenny Vaccarro. The former University of Texas star is a very versatile player; adapt in man coverage and near the line of scrimmage. Byrd’s presence will allow Vaccarro to play with more controlled chaos, something he excels at. The Saints have one hell of a young safety tandem between these two players. The duo might be regarded as second only to Seattle’s group soon enough.

During the lead up to the free agency period, Jarius Byrd was described as Earl Thomas-lite. While he doesn’t have the out of this world range that Thomas possesses—no one does—Byrd can certainly cover a ton of ground. He will make up for the mistakes of his teammates, and can close on the ball in a hurry.

The Saints haven’t had a playmaker like this in the secondary since Darren Sharper. Jarius Byrd brings that sort of highlight reel play, and a little more. The Saints defense will be even more deadly in 2014.


What he leaves behind with the Bills:

The Bills probably knew Byrd wasn’t long for Buffalo after their contract dispute last offseason. Even though they might have seen his departure coming, it doesn’t mean they were ready for it.

The Bills gave Aaron Williams a nice contract extension right before Byrd was set to hit free agency. It was a signal that they knew Byrd was gone, and that they believed the former college cornerback would be a capable replacement. Williams has been a starter for Buffalo, but will now assume the lead safety role.

Da’Norris Searcy is the player in line for more snaps now that Byrd is a Saint. Searcy saw a good amount of action last season, as Buffalo’s franchise player dealt with a few nagging injuries. During this time, Searcy proved himself just about an average starter. He isn’t a real liability, but doesn’t offer anything special.

With the combination of Williams and Searcy, the Bills will not be as good on the backend. Williams is a fine player, and an above average starter. However, he doesn’t offer the dynamic ability of Jarius Byrd.

The Bills clearly didn’t value Byrd as highly as New Orleans, and other teams, did. Unfortunately, there is no getting around the fact they will be worse off without him on the roster.

Here is where things get interesting for the Saints. It was well known around the league that New Orleans had serious salary cap issues heading into this offseason. The team released several players just to get under the cap, and comfortably franchise tag tight end, Jimmy Graham.

Adding a player of Jarius Byrd’s caliber, and price tag, seemed inconceivable for the New Orleans Saints. General manager, Mickey Loomis, is known as a shrewd money manager, and he struck again with Byrd’s contract.

When you look at Byrd’s six year, $56 million dollar deal, it’s hard to fathom how the Saints can afford him at $9 million annually. A closer look reveals that the deal is structured so that Byrd will only count $3.5 million against this year’s cap. This allows the Saints to keep the band together for a deep playoff run in 2014.

However, the picture isn’t so rosy afterwards. Byrd’s cap number jumps to $10.3 million in 2015. He will hover between an $11 and $9 million charge for the life of the contract. The Saints clearly view themselves as big time contenders for the next several seasons with Drew Brees at the helm. They are willing to mortgage the future for the present.

While it’s nice the Saints obtained a great player in Byrd they are taking a big risk. Not only will they soon be in an unmanageable salary cap hell, they will suffer in the near future.

The move to obtain Byrd means that the Saints sit at just under $2 million in cap space. The team desperately needs upgrades on the offensive line, and will require more room to sign their draft picks. Its also fair to wonder what this means for Jimmy Graham. The superstar tight end needs a new contract very soon, and he will cost a ton. It seems impossible that the Saints would find room for him when the time comes next offseason. You could debate whether adding Byrd is worth losing an elite talent like Graham.

In the NFL, the salary cap is more often an excuse than a true deterrent. Loomis is a good example of how general managers can always manufacture room. However, in this instance, it’s hard to see how the Saints will manage the impending storm.

With an underrated front seven—featuring Cam Jordan and Junior Gallette—harassing quarterbacks, Byrd will feast. The now former Bills’ safety is used to playing on a team with a good pass rush, and knows how to exploit the chances that affords him. He might approach his career high interception number of nine now that he’s in this defense.

The Saints have a near shutdown corner in Keenan Lewis. Ryan can lock him up with one receiver, drop Vaccarro into the box, and Byrd can cover the other side of the field. If the Saints manage to upgrade their cornerback depth, Ryan can be even more creative with his new toy.

Having a rangy safety like Jarius Byrd means the team can play more bump and run, man coverage. Ryan already does plenty of this, but can better pull it off now that he has the requisite third level of defense. The already ascending Saints’ defense got much better by adding one of the NFL’s best young safeties to the mix.
Comment Box is loading comments...
Powered by