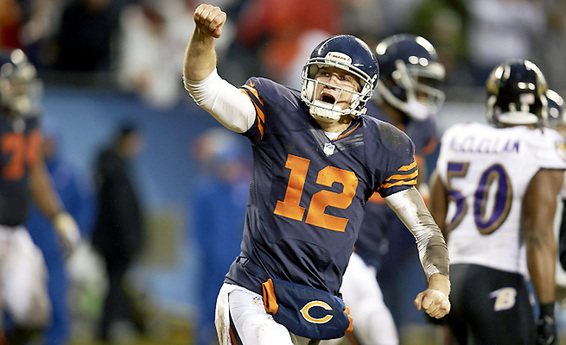 The Buccaneers have signed Josh McCown with the hopes he will be the starting quarterback (Image: Sports Illustrated)
By: Matt Harmon
March 18, 2014


How he fits with the Buccaneers:

This is as a good a case as any to remind you of the methodology in the Backyard Banter’s free agent breakdown. It’s something I don’t think was ever explained well. In some cases, the players fall into tiers based on the quality of talent available at their position. A free agent might not be regarded as a “high-end starter” or just a “role player” in a vacuum, but are listed as such due to the state of the market.

I don’t believe Josh McCown is a good starting quarterback in the NFL. However, in this free agent market, signing him represented the best chance for an NFL team to obtain one.

Organizationally, this is a poor decision. The Buccaneers have a young quarterback who showed promise last season in Mike Glennon. The NC State product put enough on tape to make an NFL team believe he can be a solid starter. Tossing Glennon aside without at least a competition doesn’t make a lot of sense. Nevertheless, Lovie Smith—who doesn’t have a great track record with the position—has already made the decision to start McCown.

In Chicago, McCown had the benefit of working with a quarterback whisper in Marc Trestman. The former CFL coach does a great job of making things easy for his signal callers. It led to McCown, a below average player his whole career, having a wonderful statistical season. The Bucs’ offensive coordinator, Jeff Tedford comes with a great reputation, but he’ll be hard pressed to replicate Trestman’s work.

McCown has a good feel for, and nimble feet in the pocket, but his ability as a passer is questionable. He doesn’t have the power to drive the ball, and his placement is a bit off at times. His low 2013 interception total profiles him as a game manager, but McCown has some reckless gunslinger to him. Watch the film from the win over the Cowboys. You’ll see several poor throws that on which the Cowboys’ defenders missed opportunities for takeaways.

His two monstrous receivers in Chicago, Brandon Marshall and Alshon Jeffery often bailed out McCown. Observers labeled him accurate because they saw completions, but many were a result of Jeffery and Marshall’s ability to dominate the catch point.

With all that being said, there are aspects of the Bucs’ roster that could allow McCown to succeed.

The Buccaneers have two big receivers who can win at the catch point, although not consistently. Vincent Jackson and Mike Williams aren’t the Bears’ duo, but they are a solid pair. Tampa bay also fields a very deep and impressive stable of running backs, led by Doug Martin. McCown shouldn’t have to carry the offense.


What he leaves behind with the Bears:

Chicago likely knew that McCown would depart after the season he had. He played the good soldier as Jay Cutler’s backup, but he certainly wanted to be a starter. After such an impressive statistical season, McCown was always going to try to fetch his first starting gig in years.

Now the Bears have a hole at the number two quarterback spot. Phil Emery would be wise to carefully scan the quarterback market, as Cutler’s health has been unreliable. If he misses more games next season, the Bears won’t have McCown to rely on.

There has been plenty of talk that the Bears could simply elevate veteran Jordan Palmer to the number two spot. Palmer is a career backup, so that might not be a great plan. But don’t forget that’s all McCown was before Trestman’s arrival.

Don’t rule out that the Bears add a quarterback in the mid rounds of the draft. Obviously the team made a big commitment to Jay Cutler early this offseason. But the front office would be wise to pair Trestman with a young, high upside quarterback.

Cutler is bound to miss more games in the future. If that young quarterback steps in and has a McCown-like season, the Bears could reap some draft picks in a trade.

Josh McCown contract with @TBBuccaneers is 2 yrs, $10M with incentives that could push value to $15M a la what Chad Henne got from @jaguars

The money is fair for Josh McCown. Some high-end backup quarterbacks are commanding around $3.5 million or more. So giving a guy who might start for you $10 million over two years is reasonable.

McCown will make $4.75 million in his first year, and $5.25 in the second. The contract also contains a few bonuses that are likely determined by his play and games started.

Even if Glennon—or another player—passes McCown for the starting job, the Bucs will have a solid backup. The contract would not be crippling if he ends up as the second quarterback.

It is highly unlikely Josh McCown comes close to matching his 2013 production. His 66% completion percentage and his 13-1 touchdown to interception ratio will fall. It is both a matter of odds and McCown’s change in environment.

His touchdown to interception ratio is nearly impossible to match. However, outsiders won’t be nearly as impressed with his accuracy now that he doesn’t have the receivers to consistently win 50/50 balls.

In Tampa his numbers will reflect more of what the tape shows. He will be an average, at best, starter. McCown will likely come closer to having an even spit in touchdowns and interception. The team will also struggle to move the ball when opponents sell out to stop the run. McCown doesn’t come off as a quarterback capable of carrying the team, or putting together long drives.

It’s would be a very foolish decision if Tampa Bay has really shut the door on any sort of quarterback competition. Mike Glennon had some downs to go with plenty of ups during his rookie season. At least Glennon is young enough where he can correct his mistakes. The Bucs might already have a young, solid starting quarterback on their roster. If the organization were open to it, my money would be on Glennon winning and holding the job over McCown.

McCown could be a good starter in Tampa Bay, but why not make it a competition? He has not done anything that proves he is a strong long-term option.

For better or worse, Lovie Smith and this organization made Josh McCown their first starting quarterback. The Bucs will have to bank on the grouping of Tedford/Jackson/Williams/Martin being Trestman/Marshall/Jeffery/Forte-lite. Otherwise, their new starting quarterback won’t be the same player from 2013.
Comment Form is loading comments...
Powered by