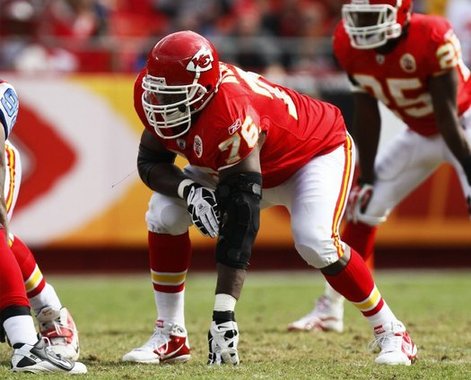 The Miami Dolphins have found a great solution to their pass protection issues in Branden Albert (Image: media.kansascity.com)
By: Matt Harmon
March 11, 2014


How he fits with the Dolphins:

The Dolphins have taken a great first step toward fixing their offensive line issues. Branden Albert will step in and immediately solidify the left tackle position in Miami. Albert has been a starter at that spot since the day he was drafted, and will continue to do so in his new home.

Albert does his best work as an edge pass protector, and Ryan Tannehill will be thankful for his presence. The young quarterback has not had any time to work with in the pocket since he arrived in Miami. Signing Albert shows that the new Dolphins front office is able to identify a major problem, and properly address it.

Tannehill is their future, and they need to assure everything is in place for him to succeed.

The Dolphins struggles to run the ball are one problem area that Albert won’t be of much help in fixing. Despite his history at guard, Branden Albert has never been much of a road grader in the running game. He is not a total liability here, but you won’t notice him blasting open holes for Lamar Miller next season.

All in all, the Dolphins have now replaced Jake Long by securing a new franchise left tackle. Albert will be welcomed with open arms in Miami.

For an extended look at how Branden Albert fits with the Dolphins, check out my fellow staff writer, Ian Wharton’s film breakdown at Draft Mecca.

The Andy Reid/Jon Dorsey led version of the Chiefs seemed hesitant to commit to Albert from the start. Whether it be his injury history, or player preference, this regime never seemed ready to go all in with Branden Albert.

That thinking led the organization to spend last year’s number one overall pick on Eric Fisher. The likely idea was that Fisher would take over for a departed Albert at left tackle in 2014, after spending a year on the right side. With free agency officially opened, that scenario now becomes the Chiefs reality.

The problem is that the team cannot possibly feel as comfortable with that plan today as they did less than a year ago. Moving Fisher isn’t the issue; the underrated Donald Stephenson will slide seamlessly into the starting lineup. The problem is that the former top pick struggled mightily as a rookie. He didn’t look confident in his strength, and was easily exploited by NFL pass rushers.

Perhaps Fisher wasn’t comfortable on the right side after being a left tackle for years. Maybe a move to the blind side will put everything back in order for the young player. Still that’s a lot of maybes for a team that wants to return to the playoffs next season.

Despite a plan to replace him, and a backup in Stephenson who is more than ready to start, the Chiefs will miss Albert. He wasn’t a perfect player, but he was a rock in pass protection. You certainly cannot say that about his heir at the position.

Now, this is a lot of money for Branden Albert, a player who isn’t without his share of warts. Albert has had injury issues, and hasn’t always been a great player.

Nevertheless, if you want to acquire a top ten left tackle this is generally the asking price. The Dolphins desperately needed to upgrade their offensive line, and Albert can be the building block in a rebuild.

It’s a lot of money to pay, but when you have such a specific area of need and you decide to tackle it in free agency, this is usually the result. Miami couldn’t possibly come away from today without securing a tackle—as they were all flying off the market. Even if they overpaid a bit, it was not some egregious mistake.

Albert is 29 years old, and likely will not see the entirety of this new contract. However, he will certainly give the Dolphins great play from the left tackle spot for the 2014 season, and at least two or three beyond that.

Offensive tackles generally age well, and there is no reason to think Albert will not do the same. Miami netted themselves a good starter for the next few years.

Not only will you see the offensive line get better, but also Ryan Tannehill’s play will certainly improve with Albert on board. His presence will also help the Dolphins’ franchise quarterback have more time to find Mike Wallace deep down the field. The Dolphins have made their whole offense better with one free agent signing, which is always a good move.
Comment Form is loading comments...
Powered by