The Fall of Aaron Hernandez and "The Patriot Way” 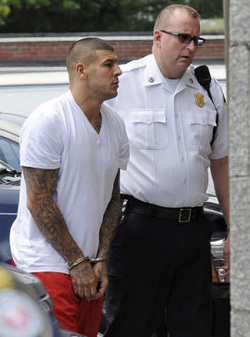 By now you have likely heard about the events that led to Aaron Hernandez, the 23-year old Pro Bowl tight end, being released from the New England Patriots. Hernandez was arrested and has since been charged with the first degree murder of Odin Lloyd, a Boston semi-pro football player and associate of Hernandez, in addition to several other weapons charges. Lloyd ‘s body was found a mere mile from Hernandez’s home and he had been shot multiple times in the back and chest. I will not get into the evidence of the case, and whether Hernandez may or may not be guilty as you can find that information anywhere on the internet. All I will say is that things do not look good for Hernandez and since he was denied bail he will be in jail until this case goes to trial at the very least. I will discuss here is how this affects New England from a football standpoint and as team culture.

Back before the 2010 draft it was well known that Hernandez carried some serious character baggage. Whether it be rumors of multiple failed drug tests or possible gang involvement, many teams felt he was such a risk that they removed him from their draft boards entirely.  Despite the risk, the Patriots scooped up the fringe first round talent when he slid all the way to the fourth round and frankly, before the past few days it was widely seen as a tremendous move. Hernandez teamed with the Patriot’s second round pick from that year, Rob Gronkowski, to form what is likely the most unique and dynamic tight end duo we will ever see. From a pure football standpoint, it is almost tragic that we have been robbed of watching such an incredible scheme that the Patriots had set up with those two. While Gronk served as the stud do it all tight end that was virtually unstoppable, it was Hernandez who acted as the movable chess piece that really threw off the defense. Hernandez is about equal parts tight end and wide receiver and could not be covered by linebackers or safeties and was simply too big to be tackled by cornerbacks. He was the definition of a matchup nightmare and with these two dynamic tight ends. Bill Belichick and the Patriots staff could form innumerable ways to attack defenses. Both players were awarded for their other worldly performances with hefty long term extensions a mere two years into their career.

Now three years later we are forced to look back at these moves and be filled with questions. Some have stated that the drafting of Gronkowski and Hernandez is a sign of “Patriot arrogance” or have said these picks were mistakes. Gronkowski is tough case because his problems are injury related, and since he is not the focus of this article, we will steer clear of that issue for now. It is hard for me to fault the Patriots for drafting Hernandez and he far exceed the talent and ability of a fourth round pick and it would seem that the Patriots were exactly the type of organization for him to come into, they were supposed to be a zero-tolerance, well oiled machine of a franchise that forced guys like Hernandez to play to their potential and keep their nose clean. The real mistake that they are completely at fault for is giving him a massive contract extension so soon in his young career. It seemed like a story book ending for a player with a troubled past when he got in front of the media after signing his extension and told us all how being a Patriot has “changed him”. However, we now know that was completely false, and his team probably should have known that too.

The Patriots, whether you like them or not, are one of the elite teams of this era of football, but what makes them so unique is that they have long held the reputation of an organization that is built on character and hard work. Public image is of the utmost important to the owner of the team, Robert Kraft, and those who work for him. It is why the Patriots are one of the best at media-relations, keeping things in house, and win a bunch of games. The “Patriot Way” became a famous saying in the media and around the league for the way this team operated and how players were held to a certain standard. However, of late things seemed to have changed for this franchise, and they no longer mirror the teams from the past decade filled with hard working, driven, and good character players. If you feel so inclined, peruse this article (http://espn.go.com/nfl/story/_/id/9355518/nfl-2007-pats-wonder-been) published on ESPN.com recently about the 2007 Patriots and you will see a very different type of Patriots team then the one we know today.

It seemed after that Super Bowl loss the Patriots began to take on more malcontents than they were bringing in strong veteran leaders. The team traded for knuckleheads like Albert Haynesworth and Chad Ochocinco, and drafted men with checkered pasts like Alfonzo Dennard and Aaron Hernandez. Of course, a similar move worked in 2007 when the team traded for Randy Moss, but back then the Patriots had guys like Teddy Bruschi, Mike Vrabel, and Matt Light to assist Brady and Belichick in showing guys like Moss how to fall in line. Those men are all long gone now, but one of them, Matt Light, recently spoke out about how even in his final two years as a Patriot he recognized that Hernandez may not have fit with the team’s model. Before Hernandez was even arrested or released by the team, Light told one of his local area papers, "I have never embraced -- never believed in -- anything Aaron Hernandez stood for”, (http://www.nfl.com/news/story/0ap1000000215095/article/matt-light-never-embraced-aaron-hernandez). What the strong words from this story indicates to the public is that some of the “old-guard” players sensed the change in culture taking place inside New England’s locker room. If its own players were not even on board with the guy, then I am sorry, but it is beyond irresponsible and totally reprehensible for the Patriots to give out a $12.5 million dollar signing bonus to this player. Initially drafting Hernandez may not have been a mistake, but signing him to a monster extension certainly must be viewed as one at this point.

People have wanted to stick a fork in the Patriots a number of times over the years, but that is not what this article is about. What I am suggesting is that they need to regain the idea of “the Patriot way” and reestablish that culture that was in place for so many dominant years during the early 2000’s. I will give them their credit in that they seem to be well on their way to doing that, obviously with the no-brainer release of Hernandez but also jettisoning solid players like Brandon Lloyd, Kyle Love and Branden Deaderick; the latter two most likely for conditioning reasons and the former for being a poor personality fit. It seems Belichick and company are doing exactly what they have to do, and that is reestablish that if you are going to be a Patriot you either fall in line or get out. Is New England a lesser, and thinner, team because of these three cuts? Absolutely. Their defensive line depth is weaker and it is well documented they lack established pass catchers, but it is much more important that Brady and Belichick regain control of this locker room than it is to make exceptions or excuses any longer.

Great teams with solid locker rooms can afford to take gambles on players such as Haynesworth, Ochocinco, and Lloyd, because they present potential reward without much risk. However, in the case of Aaron Hernandez it appears the Patriots gambled big and lost really big. Despite the aggressive attempts this team has already made to rid themselves of this player forever, the Hernandez saga is what it is, a serious black mark on a proud franchise that hates unnecessary attention and bad publicity. Let’s all hope the Patriots have learned their lesson about taking on too many troubled players, and that they get back to strict enforcement of the Patriot Way. Otherwise, I fear we may see a shell of one of the great franchise of our lifetimes, and that would be a real shame given we are in the twilight of the career of future Hall of Famer Tom Brady.

Lastly, and most importantly I hope current and future NFL players take this situation as a serious warning sign. I joke on this site a lot about the thug4life club and we all share laughs about NFL players doing really stupid things, but this story is not one to laugh at. The Hernandez story is in some ways very tragic, because one way or another a man lost his life way too young and a family was robbed of a loved one for what was probably a very stupid and inexcusable reason. However, no one should feel sad for Aaron Hernandez. At this point he is now been connected to the murder of three people and has likely thrown away the chance at an amazing life. Hernandez is a father, is engaged, and is fresh off signing a life changing contract promising him money most people cannot even dream of. Now, at the very least, Hernandez has shown he cannot escape his past or poor judgment, and at the worst he may have murdered three people. Aaron Hernandez may be really, really stupid (http://cdn.bleacherreport.net/images_root/article/media_slots/photos/000/938/034/0626-tmz-gun-aaron-hernandez-3_original.jpg?1372288397) or he may actually be a bad person, either way what he shows sports players is that if you do not take the very hard steps it takes to leave the negative people in your past behind, everything can be taken away from you. Less than two weeks ago he was one of the rising superstar talents of the league and one of the best players on one of the best teams in the most popular sport in America. Today, Aaron Hernandez sits behind bars, accused of shooting another human being five times and leaving his body to rot. If that haunting imagery does not show athletes everywhere what they must do to have a long, happy, and successful life and career, then this story truly is a tragedy.