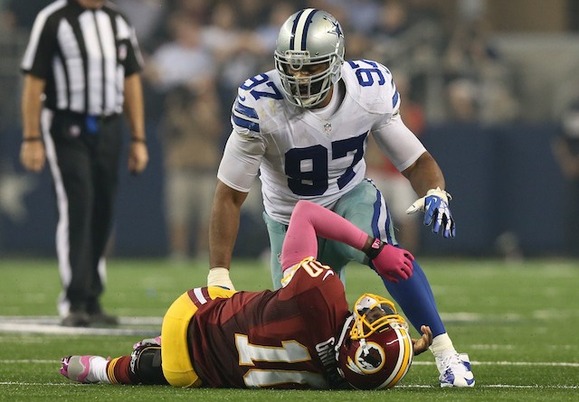 Jason Hatcher will now play for the Redskins instead of giving them headaches (Image: dcsportsreport.com)
By: Matt Harmon
March 18, 2014


How he fits with the Redskins:

The Redskins certainly loved the idea of poaching one of their hated rival’s best players. Washington swooped in and acquired Jason Hatcher after he was fresh off visits with the Seahawks and Raiders.

Hatcher was a dominant player for the Cowboys last season, recording 11 sacks and shutting down running lanes. The veteran defensive tackle was an elite pass rusher and threw around many guards with ease. If he weren’t 31 years old, he would have been one of the most highly sought after players on the market.

The problem here is, Jason Hatcher’s best fit is not in a 3-4 defense—the scheme the Redskins operate from. Of course, he played in a similar scheme while with the Cowboys in every season before the 2013. However, he took his game to another level when he became a three-technique in Dallas’ new 4-3 defense.

Hatcher is a high-end starter at the three-technique position. He would fall somewhere between Backyard Banter’s good starter and solid contributor tiers as a five-technique in a 3-4.

The Redskins might not get the best production from Hatcher because of their choice in scheme. He loses some of his early down value if Washington asks him to return to a two gapping role as a five-tech.

However, sometimes scheme fit is overrated. Washington made it work with a similar situation when Barry Coefield—a career 4-3 tackle—signed with the team. Coefield made a seamless transition to the 3-4 nose tackle spot. To this day, he is still one of the better ones in the NFL. He remained valuable as a pass rusher on throwing downs, even at a new position.

Hatcher should be able to do the same. While you won’t see him knife into the backfield against the run like in 2013, he will still harass quarterbacks. Washington can deploy a four man line on passing downs featuring Hatcher, Coefield, Brian Orakpo, and Ryan Kerrigan. That group will look very good in nickel packages.

As long as Washington is smart, they can still retain a lot of this player’s best traits. Hatcher would have been wiser in going to a 4-3 team, but there can still be a lot of on-filed value from this signing.


What he leaves behind with the Cowboys:

With the departure of DeMarcus Ware and now Jason Hatcher, the Cowboys are bleeding defensive line talent. It became their weakest unit last season after a rash of injuries, and Dallas is now without their two best players.

Hatcher made a defense full of underwhelming talent look much better than it was in the beginning of the season. By season’s end Monte Kiffin was public enemy number one, but don’t forget that there was talk of “how well his defense caught on” at first. Hatcher’s interior disruption was a major factor in that.

I was planning on writing a scathing assessment of Dallas’ defensive tackle rotation. However, the Cowboys made a big move to rectify the situation in signing Henry Melton. The former Bears’ three-technique is an ideal scheme fit and was a great player in 2011 and 2012. Unfortunately he was injured for most of 2013. If he returns to form, he will take Hatcher’s place and cause very similar chaos.

Melton better work out. Otherwise, Dallas has little hope on the interior of their defensive line. The Melton acquisition likely means the Cowboys will not draft Aaron Donald at the sixteenth overall pick. The players are too similar. None of the defensive tackles currently on the roster inspire great confidence.

Melton is the only blue-chip player currently on the Cowboys’ defensive line. If he does not pan out, the loss of Jason Hatcher will be catastrophic.

According to reports, Jason Hatcher got $9 million to sign and $10.5 million guaranteed. He made $10 million in his eight seasons in Dallas.

Hatcher was quoted saying that “Washington came in and blew the doors off” with their contract offer. As he was negotiating with other teams, the Redskins stepped up and offered a significant spike in pay. If you are familiar with this organization, you are not surprised.

While the initial numbers—$27 million over four years—aren’t too bad, there is a shocking detail. Washington gave Hatcher a whopping $10.5 million guaranteed in the first season of his deal (via sportrac.com). That is quite a big investment in a player who will soon be 32 years old, and a less than ideal scheme fit.

Washington is known for their tendency to overpay on the free agent market. Despite Hatcher’s dominating play last season, you can argue this is just another instance of that.

On the other hand, Hatcher’s cap hit is pretty modest in the first few yeas, until it rises over $8.75 million in the final two. Its likely Hatcher will not be in Washington come that time.

Washington was irresponsible to pay Hatcher much more than what he was being offered by other teams. They should have been more patient, but rushed to acquire a player who comes with questions about his scheme fit. While this shows that Washington clearly has to “show the money” to entice people to play for them, they still acquired a really good player.

Back as a five-technique in a 3-4, expect Hatcher’s production to fall off. He probably will not approach double-digit sacks again.

Defensive coordinator, Jim Haslett, must be responsible in deploying his newest defender. If he lines Hatcher up in a traditional 3-4 front too often, he will waste a good player. Haslett must go with four man fronts more often to best utilize Hatcher. None of the other players on the Redskins would be hurt by such alignments, so it makes sense. The defensive staff in Washington hasn’t done much that has made sense recently, however.

Hatcher showed last year that when he is deployed as a one-gap penetrator, he could be an elite lineman. He has the veteran savvy, strength, and speed to overwhelm guards and centers in the run and pass game.

Much of Hatcher’s production in 2014 and the following years will depend on Washington; that should be a scary proposition. Here’s to hoping it works out for a player who is hitting his stride late in his career.
Comment Form is loading comments...
Powered by