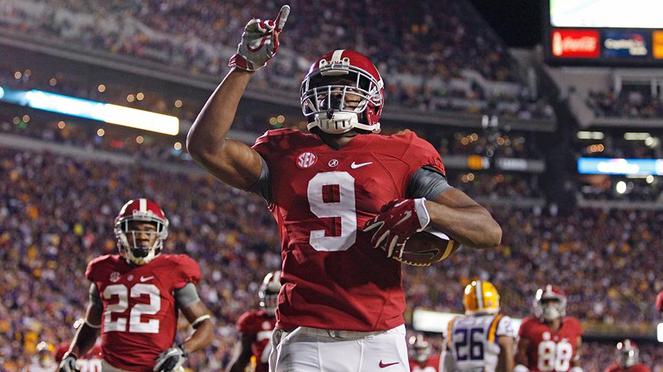 Amari Cooper brings excellent route running and playmaking ability to the table as a prospect (Image: Jonathan Bachman/Associated Press)
After quite literally a historic year for rookie wide receivers, the 2015 NFL Draft’s group has a very tough act to follow. Its highly unlikely the class will be talked about with such high regard, and nearly unthinkable the first-year players will make the impact their predecessors did. However, there are a few receivers who should garner attention as first round picks.

One of these players is Alabama’s Amari Cooper. The junior receiver was a sustaining and electric force for a Crimson Tide passing game that never featured jaw-dropping quarterback play. Through it all, Cooper made his presence felt. He declared his intentions to enter the NFL Draft after terrorizing the SEC last season.

Amari Cooper is widely projected to be the first receiver off the board, and thought of as a step above his peers. There are even some prognostications that have him going as high as fourth overall to team up with Derek Carr in Oakland.

It seems the draft community has seen enough from Cooper to believe he is the type of receiver who will not only translate to the pro game, but also lead and transform an NFL passing attack. In this space, we’ll use the Reception Perception methodology to decipher what type of player Cooper is, and whether he fits those criteria.

Disclaimer: usually a full season profile of Reception Perception works through eight games of a receiver. Unfortunately, with the scarcity of all-22 footage available on college prospects, that was not possible. For the purposes of this profile, we’ll be working strictly off Amari Cooper’s games against LSU, Ole Miss, West Virginia, Auburn and Mississippi State.

Amari Cooper has been the featured part of the Alabama passing game for the last several years. He was A.J. McCarron’s preferred target in 2013, and helped Blake Sims make the transition to starter this season. Cooper also played multiple roles in the Crimson Tide’s air attack.

As you can see by his alignment data, Amari Cooper lined up all over the field as a collegiate. In the games charted, his time on the line of scrimmage and off it was just under a 60/40 split. The coaches were comfortable giving with Cooper being one of the first players off the ball, or leaving him extra space to work with pre-route. Cooper was also asked to play multiple receiver positions. He took 37.9% of his snaps on the right side of the formation, and 47% on the left. That’s to be expected, but he is capable of doing a little more. There were plenty of times Cooper functioned as a slot receiver, where he played 13.6% of his snaps. Lane Kiffin seemed to have a hand in what was a more aggressive and creative utilization plan for Amari Cooper. The star receiver even saw a few snaps in the backfield, although it was only a small 1.5% in the games charted.

Looking at the numbers, Amari Cooper was most often used on the left side of the field, while starting on the line of scrimmage. Typically that speaks to a wide receiver playing the x-receiver, or split end, position. This archetype of receivers evolves in to the primary targets in a team’s passing game, and usually provides a physical presence.

It’s fair to wonder whether Cooper will translate to that position in the NFL. His physical profile (listed at 6’1 and just over 200 pounds), does not quite match up with the cornerstones of the x-receiver archetype. His combine numbers, while unknown at this time, are no guarantee to wow observers. However, we’ve seen that players who do fit the size/speed mold can fill the x spot. Many analysts compare Amari Cooper to Reggie Wayne or Roddy White, who have usually functioned at other positions than the x. Both of them are great players, and if Cooper approaches that level, he’ll have a fine NFL career, himself.