The Oregon State speedster will become a popular pick for the Eagles’ first round pick in mock drafts. His incredible speed is similar to the departed Jackson’s and he would be a natural replacement. But it’s clear Chip Kelly believes his offensive system elevates the talent on the team.

Philadelphia will still likely look at a premier defensive prospect at the 22nd pick in the wake of Jackson’s release. They can nab a solid replacement for their former star later in the draft.

Bruce Ellington would bring a more physical version Jackson’s role. He can be a nice chess piece in the screen game, while also winning at the catch point.

Kelly’s own former player, Josh Huff, would be nice short to intermediate target for Nick Foles. His skills as a blocker would be a nice bonus in the Eagles’ run heavy offense.

If the Eagles want more receivers with size, DaVante Adams makes a ton of sense. His run after the catch skills are very similar to Michael Crabtree’s. Kelly’s offense is predicated on such attributes and he would be a great fit.

Don’t just assume that because Brandin Cooks is small and fast he will replace DeSean Jackson in Philly. Kelly’s offense is so complex and diverse that the answer isn’t that simple. 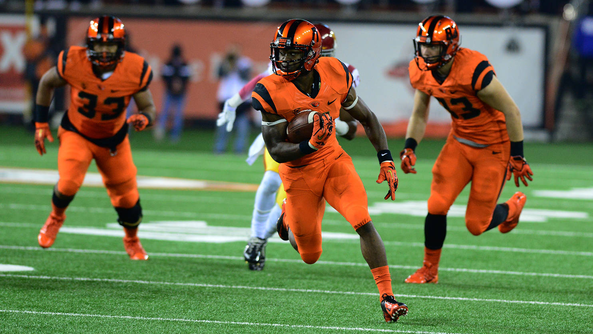 Don't just assume Chip Kelly will take Brandin Cooks because he has great speed (Image: rotoviz.com)
2)    Maurice Jones-Drew is a good addition for the Oakland Raiders

The Raiders are getting some deserved criticism for signing too many aging players. Some of their additions—Matt Schaub, Lamarr Woodley, and Justin Tuck to name a few—would have been fantastic in 2010, but are less than inspiring these days.

The popular opinion is to group Maurice Jones-Drew in that bunch, but the former Jaguar can succeed in Oakland. He was one of the few good starters in Backyard Banter’s running back free agent breakdown.

It would be foolish to forget just how poor the talent around MJD was in 2013. Opponents hardly feared the passing game led by Blaine Gabbert and Chad Henne and sold out to stop the run. Making matters worse, the Jaguars fielded the worst run blocking offensive line (per Pro Football Focus). The aforementioned group also saw its best player get traded away and a highly touted rookie tackle go down with an injury. Jones-Drew displayed good vision, but just couldn’t find many holes to run through.

MJD still has plenty of plus attributes. His vision is above average, and he has the power to barrel down field. The veteran was also wise to sign with a team that employs a power run scheme. Jones-Drew doesn’t have the skills to run laterally anymore, but he won’t have to in Greg Olson’s system. Rashad Jennings looked great hitting the hole in their power scheme; so can MJD.

Unless Latavius Murray breaks out in a big way, Maurice Jones-Drew should lead the Raiders in carries. The unreliable Darren McFadden doesn’t pose much of a threat at this stage. He won’t be the same superstar of old, but MJD will be a solid starter for the Raiders.

3)    The oversaturation issue has two sides

An NBA owner had some harsh words for the NFL recently. Dallas Maverick’s owner, Mark Cuban, said the NFL could implode due to its oversaturation.

Cuban has a point. The NFL is insistent on putting its product on TV as many nights as possible, even if it sacrifices the product. The media beats any story to death, to the point it exasperates fans. Stories like “Favre Watch” and “Tebow Mania” have been massive turnoffs.

The dedicated, and borderline obsessed fans and analysts on football and draft twitter have expressed their frustrations. We all were annoyed when TV analysts made a big deal over the recent quarterback pro days. We spend most of our time thinking and talking about football. Most of us are at or near a breaking point with the amount of attention we dedicate to a simple game.

On the other hand, Cuban is dead wrong. Sure, those of us who own websites and cover the league might get tired of the demands. But the general public won’t share our sentiments.

For most people, if there were a football game on every night of the week, it would be a good thing. They’d watch the game, have a few beers, turn it off when it was over and go to bed.

Normal people don’t have to write a column after a game ends. The average fan won’t spend 30 or more hours in a week watching more football on the coaching tape.

It is certainly possible more analysts could get burnt out by the over saturation, but it’s important to keep perspective. Society views this as a mere entertainment. People are fine with hearing an occasional hot take from ESPN, or watching a four-hour game and going about their day. They won’t spend an extensive amount of time on Twitter debating, or writing articles about it.

As long as the machine keeps rolling, the NFL will continue to push the issue. It won’t bother the masses, but it will begin to irk those of us who choose to let our lives revolve around the game.

1)    This week’s On the Couch with Sigmund Bloom and Matt Waldman.

Fist off, if you aren’t a regular subscriber to FootballGuys.com’s The Audible

Podcast, you’re missing out. Cecil Lammey and Sigmund Bloom are regularly doling out awesome content. The weekly On the Couch segment might be the tops. Bloom always has at least one incredible guest alongside him to breakdown football from a deeper angel. It’s my favorite listen of the week and always inspires me to get better as an analyst.

In this edition, Bloom was joined by another one of my favorite football minds in Matt Waldman—his invaluable Rookie Scouting Portfolio is set to drop this week. Waldman and Bloom put up a stunning nearly two-hour breakdown of the draft eligible prospects of my favorite position to evaluate; the wide receiver group.

They covered the obvious stuff. Like why Sammy Watkins is an elite prospect and the depth of this class. But as always, these two went a little deeper to tell you why Odell Beckham might be better than Mike Evans. They covered little known names like Cody Latimer, and the struggles of Jordan Matthews and Allen Robinson.

There was a ton of great discussion on the podcast, and so many thoughts I’d love to comment on. Check out this week’s On the Couch, and you’ll immediately be more knowledgeable about this year’s NFL draft.

2)    What do you watch when evaluating wide receivers? By: Danny Kelly of SB Nation

Sticking with the receiver theme, this was the best article I’ve read this week. Seahawks’ writer, Danny Kelly (or @FieldGulls on Twitter), detailed some the key nuances of scouting wide receivers.

Kelly went in depth in showing how the position is about so much more than being big and fast. He provided GIFs demonstrating proper hand technique, and explained the art of route running and getting open.

I love watching receiver’s work because it might be one of the more misunderstood positions in football. Kelly’s scouting breakdown showed some of the proper attributes fans should cite when debating these players.

Great articles like this one are the inspiration in forming some of the receiver content that will hit Backyard Banter this summer. But that’s for another time. 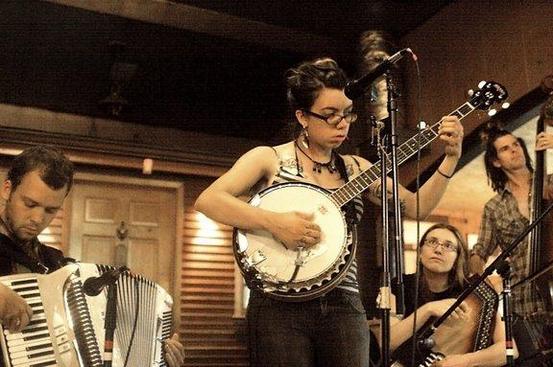 Taken from the website’s bio page:

“Hurray For The Riff Raff is Alynda Lee Segarra, but in many ways it’s much more than that: it’s a young woman leaving her indelible stamp on the American folk tradition. If you’re listening to her new album, ‘Small Town Heroes,’ odds are you’re part of the riff raff, and these songs are for you.”

If you’re anything like me, folk music is the fastest way to your heart. I have a diverse taste but nothing gets at me like a good acoustic guitar, a banjo and some thoughtful lyrics.

The New Orleans based singer has a powerful voice, and her accompaniment is right on point. She should be the latest act that makes it big in this modern day revival of the folk genre.

If you have a good half hour to kill, or want some amazing background music, check out this intimate live show. Hopefully you’ll fall in love with her brilliant musical talent, and quirky ways. I sure have.

What I’m Watching This Week

I dropped a tweet this weekend that should really show you my thoughts on some of this draft’s quarterbacks:

When you see these quarterback rankings you say? pic.twitter.com/yP5bFcUAgt

I listed “nope” as my tenth quarterback to display how I want nothing to do with guys like Zach Mettenberger, Tahj Boyd, and A.J. McCarron. I really don’t like Jimmy Garopplo at all, but he made the list purely because I hadn’t seen anyone else to add, yet.

Over the weekend I started to check out some of the players destined for the late rounds. I came away most impressed with Ball State’s Keith Wenning and UNC’s Bryn Renner.

Wenning is a favorite of a new face on the draft scene, the fantastic Kyle Crabbs of NDTScouting.com. When Kyle pointed out to me on Twitter just how highly he valued Wenning, I was intrigued. After watching some Wenning’s tape, I can see the positive traits.

The former Ball State quarterback has really nice ball placement, and shows signs of good eye use. What I liked most was the way he throws the football. He has a strong over the top delivery. It helps Wenning throw beautiful fade routes, and put a great arc on deep passes.

Wenning has some things he needs working on, but there is something here. Hopefully he catches on with a good program late in the draft.

I was interested in Renner because of the UNC ties, and some high praise given by Mike Mayock and Peyton Manning. He was a developing prospect, but had his senior season destroyed by an injury.

Renner commands the field in a high tempo offense that doesn’t really suit him. He also stood strong under heavy pressure, and delivered the ball from multiple platforms.

Renner showed me good zip on his throws, and enough traits to be a late round developmental project. With his ability to lead an offense, there’s a chance he can be groomed into something.

When the Panthers released franchise icon Steve Smith, it sent fans into an uproar.

Things got worse as the team’s other three top receivers—Ted Ginn Jr., Brandon LaFell and Domenik Hixon—signed elsewhere. The cries from Charlotte grew deafening as other teams picked up just about every relevant free agent pass catcher. Unknown players like Tavarres King and Marvin McNutt atop the depth chart. It’s hard to see how Carolina will field a competent passing game.

Their new addition is far from a savior. However, signing Jerricho Cotchery is a fine first step to rebuilding the wide receiver corps. 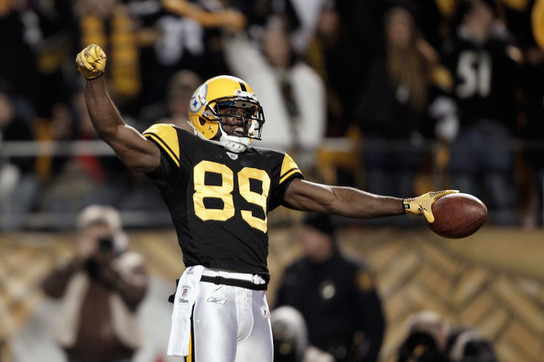 Jerricho Cotchery isn't a star, but his addition was a nice one for the Panthers (Image: Jared Whickerman)
The former NC State product is not an overwhelming physical specimen. He is, yet, a great route runner who creates plenty of separation. Panthers’ quarterback Cam Newton did not have a receiver like that in 2013. None put much space between himself and defenders last season.

The fan base and national media thinks Newton needs a speed demon in order to maximize his skill set. That is not the case. Cam needs receivers who can create separation and that have a wide catch radius. At the very least, Cotchery can provide that.
Widget is loading comments...
Powered by