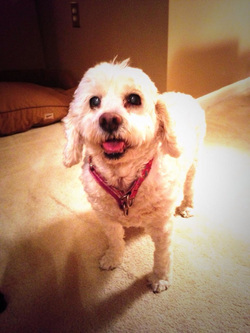 Many people who follow my work know me for my dog. But before there was Charlie, there was Dixie.

I was eight years old when we got Dixie. I can still remember driving to the farm to pick her up 16 years ago with my parents discussing what to name her, while my younger sister and I gleefully anticipated meeting our new dog in the back seat. We had just moved into a bigger house with a yard, and of course, the best way to complete that life change is to add a puppy to the mix.

She was a beautiful dog, and full of energy. Snow white, and a Cocker Spaniel/Poodle mix. My dad was particularly excited about the poodle part, because she wouldn’t shed. It was dad who selected the name Dixie, as he grew up in the North Carolina. A fitting tribute for his southern roots.

Throughout our lives in that house, Dixie was there. Friends came and went, years went by, furniture changed, my parents divorced, and Emily and I moved out, but Dixie was a constant force. For as wonderful of a dog as she was, Dixie wasn’t very bright. Many a visitors to the house shared a laugh as she would do something or another that was ill-advised. Her dim wit was especially pronounced when we’d let her hair grow out long. A fair few of my female friends in high school were convinced she was actually a sheep.

Dixie was lovable. A true peaceful soul. Wandering back through my memories of the last 16 years I can’t recall one moment where she crossed anyone. Perhaps I’m being selective in light of her passing, but she was an incredibly kind dog. She was easy to love as a human, and even more so for other animals. My best friend’s family dog growing up was a lunatic, and lived on the opposite end of the lovable spectrum. However, he always got along well with Dixie. She had that soothing way about her.

She changed as she aged, but Dixie never left us with anything less than pure joy. We kept her involved and active, and she responded with spunk. My friend Ricky and I used to take her on our boat while we would drink beers, listen to Dave Matthews Band and talk shit. She drank a load of that lake water and threw up in the boat one trip. Classic Dixie. She got to spend a month down at my dad’s beach house this last summer. A therapeutic experience for the both of them, I’m sure. She got to be at my sister’s graduation party in May down in Norfolk, Virginia. And she was always present out there on our back deck whenever we had events at the house, just hoping for one morsel of food to drop. Not bad for a senior citizen. 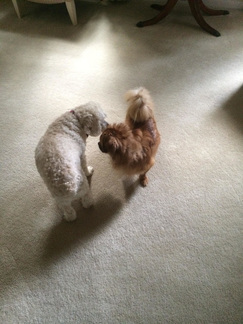 Dixie and Charlie meeting for the first time in August 2014
Dixie’s aging was a big part of the reasoning for getting Charlie, in fact. I returned to live at home with my mom for a brief period post-grad. It was during that time mom and I decided that a puppy around would help bring out some of the youthful vigor still present in a 16-year old Dixie. When a co-worker was giving a way Charlie, I couldn’t resist. The plan almost backfired. When I brought Charlie home at a spry six months of age, he was like a wild animal. Brimming with energy, marking every corner and yet to be neutered, it was tough to get him to not pester Dixie—if you catch my drift. I’ll admit there was a period of buyer’s remorse with Charlie the first night because of that. For all the love I have for him now, Dixie had seniority. You don’t mess with her.

Eventually Charlie found his way into my heart the next day, and his behavior gradually evolved. After his “operation” he and Dixie could co-exist and the two became compatriots. The pictures I have of the two of them together are true treasures. Now that we no longer live at home, we’re still searching for as good of a friend to Charlie as Dixie was. He’ll miss her, even if he doesn’t know it.

It’s still so shocking to me how long Dixie was with us. 16 long wonderful years. Seemingly for the last four years, whenever I was back at home, I’d wake up in the morning to Dixie sprawled out on the floor and had to check her to make sure she was still with his. Her hearing faded the last two years, so those moments grew frightening longer, but it became something to laugh about when she’d stir and look up at you with growingly misty eyes. I’ll miss those.
Thousands upon thousands of times she’s gone outside on her own, done her business, and come right back to front door. On Friday, she varied. She knew it was the end. Dixie chose to leave and go find her eternal peace on her own terms. I’m happy she had the opportunity to make that choice, and even in her old age, found a way to make it happen. Dogs know us better than we know ourselves. I’m sure Dixie knew my mom would never have the strength to make the choice to put her to sleep when it came time, and I’m pleased that she made it so that mom didn’t have to. In one final act of love and respect for us, Dixie showed us how much we meant to her.

A Twitter follower shared this quote with me earlier today, "Why do dogs live shorter lives? Because they already know how to love without limits". That feels pretty perfect.

I can’t tell you enough how much all of your support means to me, and to my family. You all answered our call for help in finding her after she went missing, and for positive vibes. My tweet out from the other side of the country got over 136,000 impressions, which sounds like a lot:

My family's dog went missing tonight. Woodbridge, VA area. She is 16 yrs old. Any support, from afar, is appreciated pic.twitter.com/R3ggWv6HGP

You did your part. Not only that, but so many more of you reached out on Twitter, Facebook or though text to wish us well as they searched, and to offer condolences when she was found already gone. I tried to thank everyone personally for sharing that Tweet last night, and some today when I’ve felt up to it. If I missed you, I’ll take this chance to extend my upmost gratitude. I will never forget the past two days, and the warmth shared by you all. Never lose faith in people.

Make no mistake, this story had a happy ending. Even though the work to locate her didn’t lead to a pleasant discovery, we did find her. The worst was not knowing, the painful thoughts of her out at night alone. Now we know she found peace, and that this was what she wanted.
​
16 years. Wow. We were so lucky to have her for so long. We got to laugh at her, play with her, and we’ll cry now that she’s gone. There’s something so life affirming about having a good dog around. And damn it if one of the best dogs in the whole world didn’t leave us today.

I’ll be a dog owner as long as I live, and am beyond blessed that I’m going through life with Charlie by my side now. But Dixie was first. She’ll always be first. She lit up that house for so many years, and I can’t even imagine how it will feel to go back there for the first time, and not hear her paws clicking on the hardwood floors. Through all the changes our family has endured the last few years, this will be the most eerie to live out.

Thank you, Dixie, for everything. You were a true source of joy that I’ll never forget. An irreplaceable part of our family that leaves a void no one can fill. This world is a little darker without you in it, but I’m happy you found peace. You earned it after all your hard work making our lives such a treat. You were truly a special part of our existence, and your presence was a gift to us that you shared. You will be missed by so many, but never forgotten.

Rest easy, my friend. Goodbye, Dixie. You will always be a Harmon.
Comment Form is loading comments...
Powered by