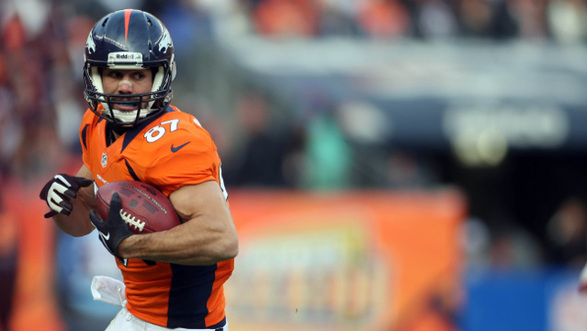 Eric Decker will look to fill a massive void for the Jets at wide receiver. (Image: USA Today Sports)
By: Matt Harmon
March 14, 2014


How he fits with the Jets:

Of course, the biggest concern with Decker is how he projects outside of the confines of a Peyton Manning led offense. Defenders point to his eight touchdowns while playing with Tim Tebow. On the other hand, that was such an odd offense it might be best to scrap those results. With Manning in town, Decker put up big numbers playing across from a true star in Demaryius Thomas.

Eric Decker has always been a complementary player, and it remains to be seen if he can be a top target.

As it stands today, Decker is the Jets number one wide receiver. If he is asked to play that role during the regular season, both he and the Jets will regret this union.

Decker has proved to be a very good NFL receiver, but not a dominant one. He has not shown the ability to carry a passing game, consistently separate from man coverage, or do battle with the opposition’s best cornerback.

Pairing Decker with Geno Smith makes for an odd couple. Geno showed a propensity to fire balls into traffic during his rookie year, and an abundance of turnovers followed. Eric Decker isn’t the type of receiver to come wide open for his quarterback, and that leads to plenty of contested situations. Neither Geno, nor his new toy excels in that area.

What the Jets can hope for is that Geno’s affinity for the deep passing game, and Decker’s downfield ability, work to make some nice music. He can track the ball well, and snatch passes near the sidelines.

Signing Eric Decker is a nice move for a team that desperately needs to rebuild its offense. He will be a great complimentary piece in the passing attack for Geno Smith. If the Jets plan on making Decker their featured weapon, this won’t end well.


What he leaves behind with the Broncos:

Eric Decker took a lot of production out the door with his departure. Still, its clear Denver did not prioritize keeping their second best receiver around. No matter how much the Broncos liked Decker, they could not invest in him with superior players—Demaryius and Julius Thomas—in need of new deals soon.

Money allocation aside; Denver’s offense is worse off today than it was during their record setting season.

For two offseason in a row the Broncos have shown they are well aware of their short window. Last year they added Wes Welker, and further integrated Julius Thomas and Knowshon Moreno to supplement the offense. In 2014, they’ve added several well-regarded defensive players in hopes of fielding a complete team. Don’t expect Denver to just sit on their hands in the wake of Decker’s exit.

The Broncos will now turn their focus to a very deep wide receiver draft class. Of course, they could always bring in a veteran via free agency, but not a player of Decker’s caliber. Jordan Matthews, or a player like him, could make sense at one of Denver’s first two picks.

It could have been a lot worse. Most experts predicted that Eric Decker would fetch a deal somewhere in the $50 million over five years range. With those figures in mind, it looks like the Jets made out well.

Decker’s new deal comes in right around high-end number two wideout money; exactly what he is.

The deal is a pretty standard one, with a basic structure. Decker’s $15 million guaranteed is perfectly reasonable. The cap charges don’t vary much either, which makes sense since the organization is currently flushed with room.

The Jets, under John Idzik, have become a much more fiscally responsible organization. New York did not rush to sign the former Bronco as soon as the market opened. Rather, they waited a bit and were able to come away with a very fair deal.

Here is the real issue with the signing. Eric Decker will not sniff a stat line close to his over 1,200 yards and 11-touchdown line from 2013. He will probably come closer to around 800 yards and fewer than eight scores.

If Decker is indeed the Jets number one receiver, the top opposing corners will be able to erase him. Unless the Jets add more talent around Geno Smith, their passing game will still be rather pedestrian.

Even if the first year does not go so well for player and team, there could be a positive future here. Decker is still young, and can grow up with Smith in New York. If more help is on the way after 2014, the former third round pick will post better numbers later on in his Jets’ tenure.

Look for Idzik, Ryan, and the Jets to continue to add pieces to their offense. New York should still be in play for one of the 2014 draft class’ many wide receivers.
Widget is loading comments...
Powered by