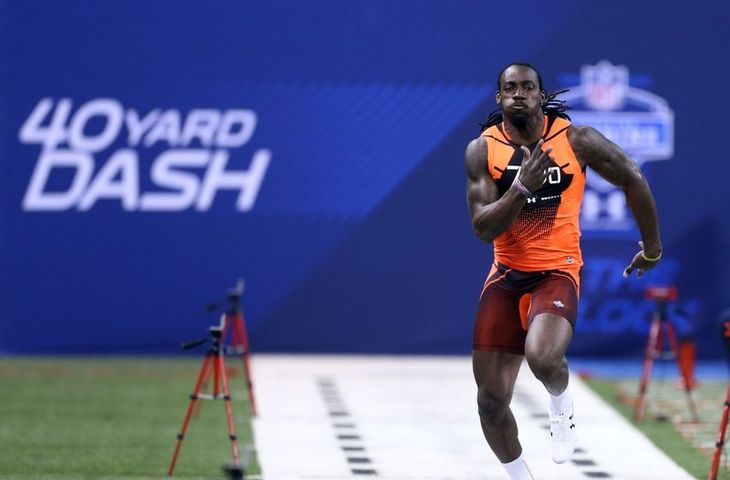 An exciting and athletic college playmaker, Sammie Coates has to prove he's not too close to other failures of that archtype (Image: Brian Spurlock - USA TODAY Sports)
Scouting wide receivers can be both such a delightful, but tricky endeavor. Spotting traits on film that tell the story of how a player can evolve from a playmaking college athlete, to a professional player, is both an exciting and gratifying experience. At the same time, watching a prospect that makes plays at the college level, and theoretically carries an NFL profile, yet does not display translatable traits, can be just as troubling as the former is exciting. If the evaluator is good at their craft, this makes them ask a number of questions—about their approach, process, and everything in between.

Athletic wide receivers can often send evaluators down through this whirlwind experience.  If a pass catcher carries the build and athletic attributes, particularly if they publicly demonstrate them at the NFL Scouting Combine, they deserve pro consideration. The trouble comes when you turn on the tape and you see what is akin to a robot functioning in the midst of inferior beings. Much like the robot, an ultra athletic receiver possesses a number of qualities that make them superior to the run of the mill player at their position. However, a robot cannot perform many of the functions that make humanity such a beautiful, and unique species. In the same vain, if a receiver is just an athlete that doesn’t possess a baseline acceptable level of technical prowess, he’ll struggle to ever reach his full potential. The physically talented but technically deficient, wide receiver is proven to be a dangerous archetype for NFL teams to invest in.

One of the 2015 NFL Draft prospect examples in the linked article was Auburn’s Sammie Coates. A dynamic athlete who brought his flair to the field; Coates averaged over 20 yards per catch in his career. There were rumors that he timed in the 4.1 ranges at some points in his college career. His times at the NFL Scouting Combine were a shade or two below that lofty standard, but still showed an exciting size/speed combination. The trouble with Coates is, despite some statistical success in a run heavy offense, there are serious inconsistencies in his game, both as a college player, and a potential pro projection.

Evaluators must ask themselves if there is enough evidence on tape to feel comfortable about slotting Sammie Coates somewhere on an NFL field. Does his athleticism show up enough for him to be a regular deep threat in an offense? Are there flashes that lead you to believe he can, perhaps down the line, develop into a down-to-down contributor at the next level? These are questions that scouts face when evaluating Coates, and queries that Reception Perception can present quantifiable answers to.

Disclaimer: usually a full season profile of Reception Perception works through eight games of a receiver. Unfortunately, with the scarcity of all-22 footage available on college prospects, that was not possible. For the purposes of this profile, we’ll be working strictly off Sammie Coates’ 2014 games against Ole Miss and Alabama.

Sammie Coates’ alignment data is pretty straightforward. He took 95.3% of his snaps on the outside right or left side of the field, and was fixed on the line of scrimmage 93.7% of the time. Coates clearly played the X-receiver role for the Tigers. In many ways, this position fits with his stature of 6’1 and 212 pounds.

Its worth considering whether Auburn truly maximized Coates’ potential, given their predictable deployment of him. Yet, that is mostly due to their offensive design. Gus Malzahn runs about the farthest thing from a pro-style offense imaginable. His system is predicated on a run heavy attack, supplemented with a mobile quarterback. There are a number of read option principles, with a running back frequently motioning into the backfield from the slot receiver position. While it’s a highly successful college offense, there is not much room leftover for a big outside receiver, such as Sammie Coates. He does not get to move around the formation much, and primarily sticks to his one role.

At Auburn, Coates’ assignment was to play the X-position, while using his speed to both create big plays, and to stretch the defense vertically. He was almost more valuable for his mere presence to open things up for the ground game, as he was a pass catching threat.