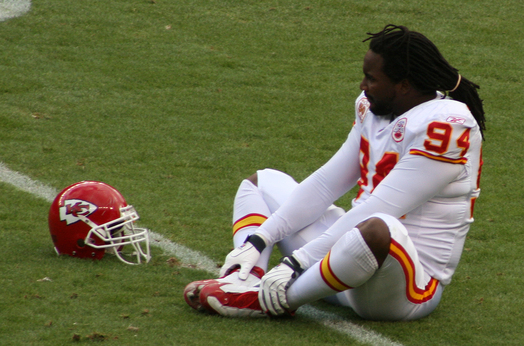 How he fits with the Falcons:

The Falcons have long strived to be a multiple front defense. Signing Tyson Jackson allows them to continue in that endeavor. It does not signal a full time move to a 3-4, but it will allow them to present several looks to the opposition.

Jackson was a massive bust as the third overall selection in the 2009. He never became a dominant five-technique in Kansas City, and was a clear over draft from the start.

What Jackson did develop into during his latter years in Kansas City was a solid role player. Jackson improved his technique became a very good player against the run. The former LSU Tiger learned how to use his strength and body to better anchor against offensive lineman. Current Chiefs defensive coordinator, Bob Sutton, especially put him in positions to win.

The Falcons have had troubles stopping the run under Mike Smith, and it’s likely been because of their preference for smaller defensive lineman. This offseason, it was well known that Atlanta was going to place an emphasis on getting bigger up front. Tyson Jackson’s addition certainly helps them accomplish that.

In Atlanta, Jackson will play some five-technique when they show 3-4 looks, but will still play on the edge in their 4-3 front. Defensive coordinator Mike Nolan will probably use Jackson in a similar fashion to how Seattle deployed Red Bryant. He can be effective in that role, and will make the Falcons a better team defending the run.

Since he was just a solid role player, the impact of his departure on the Chiefs won’t be too extreme. Dontari Poe will still be the mainstay and Mike DeVito—another solid run stuffer—will continue to play a nice complimentary role. Allen Bailey, who is lighter and provides a bit more pass rush, is the current guy on the roster who will get more playing time in the wake of this transaction.

Even though he wasn’t a great player, Jackson was a nice piece of the puzzle, and the Chiefs will need to see his role filled. The Chiefs could look to spend an early pick on a defensive lineman during the first two days of the draft. However, if they are just looking to fill the specific hole left by Jackson, they can find a run stuffing specialist later on.

Jackson never really worked out to be a star in Kansas City. He did, however, become a solid enough role player in a defense that faded down the stretch that he will need to be replaced.

At first glance, $5 million per year for a guy who will not play all three downs seems a bit much. It’s even more odd that they chose to guarantee $9.5 million of the contract. The way the deal is structured, the Falcons will be unable to cut Jackson—without incurring a hit—for the first two season of his deal.

It does feel like the Falcons overpaid a bit for a limited player who isn’t even exceptional in his role.

It’s not a horrendous contract, but the Falcons didn’t really get a great value, or play the market well. Red Bryant is a similar and more effective player than Jackson, and the Jaguars signed him for less money. If the Falcons were so intent on getting a five-tech/edge player hybrid, there were other players they could have grabbed later in free agency. In that scenario, the team would have spent much less.

This signing is almost certainly a case where prior connections played a role. Scott Pioli now works under Thomas Dimitroff in the Falcons front office. He also drafted Jackson with that third overall pick. Pioli undoubtedly pulled some strings to get Dimitroff to bring in his former player.

Sometimes when you push too hard for familiarity, you end up overrating and overpaying talent. Unfortunately, this is one of those instances.

As mentioned, the highest ceiling the Falcons can hope for with this signing is what Red Bryant gave the Seahawks. Jackson will be a two down run stopper, and will likely leave the field on passing downs. Perhaps the Falcons could use him as an interior rusher, but they already have players to do that, so it’s unlikely.

Jackson is the type of player who’s impact you cannot gauge by a stat sheet. With that being the case, he might receive some misguided vitriol from a few fans and observers. Unfortunately, the Falcons set themselves up for that by giving him this contract; just like the Chiefs set themselves up for it by drafting Tyson Jackson so high in the first place.

Jackson is what he is, a solid role player who can bring a lot of value to your team. In reality, you just don’t go signing those players early in free agency.
Comment Form is loading comments...
Powered by