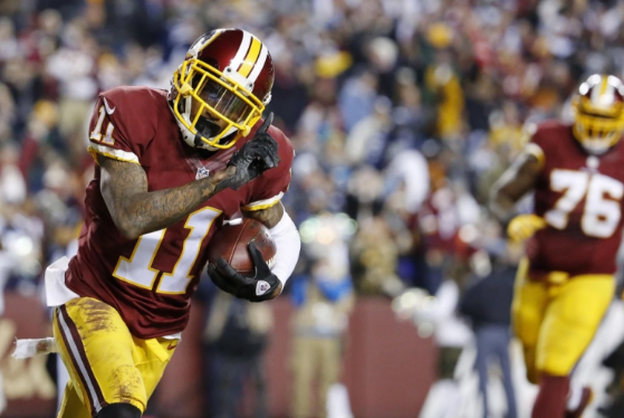 Josh Doctson makes DeSean Jackson and the Washington receivers even better (Image: Geoff Burke/USA Today Sports)
Not since Robert Griffin III’s rookie season in 2012 has Washington fielded a productive offense over the course of an entire regular season. The organization’s turnover in play-calling, inconsistent pass-catchers and turmoil under center has made steady success tough to come by.

Entering 2016, Washington’s offense, fueled by a deep and diverse wide receiver corps, looks poised to enter a fruitful stretch after the unit caught fire late last season under the direction of an entrenched Kirk Cousins.

Of course, any analysis on Washington’s passing game would be incomplete without mention of Jordan Reed. The offense’s ascension in the second half of 2015 coincided with the dynamic tight end taking a step forward. Reed averaged 67.4 receiving yards and a touchdown per game in Weeks 10 to 17, which far exceeded his career rates of 56.4 and 0.41. Medical concerns will always haunt Reed, but when he’s on the field he becomes a true difference-maker; now more than ever, though, the wide receivers look ready to be the real strength of this offense.

After coming over from the Eagles following a career year in 2013, DeSean Jackson was a shot in the arm for Washington. He averaged 19.7 yards per catch over the past two seasons and remains one of the game’s best deep threats.
​
Jackson ran a nine-route on 26.6 percent of his 237 routes charted. His 74.6 percent success rate vs. coverage (SRVC) score is not just fantastic, it’s the best mark charted since I started the Reception Perception project in 2014. SRVC measures how often a player gets open on each route and against different brands of coverage. Jackson creates separation on vertical routes better than just about any receiver in the NFL. Even if a defender can employ multiple tactics to foil Jackson, his speed and deep-route running are trump-card traits that are nearly impossible to defend. Jackson gets a bad reputation as a one-dimensional player, but he is a more complete player than he’s given credit for. His positive scores on slants and curls are more than enough to complement his vertical ability. 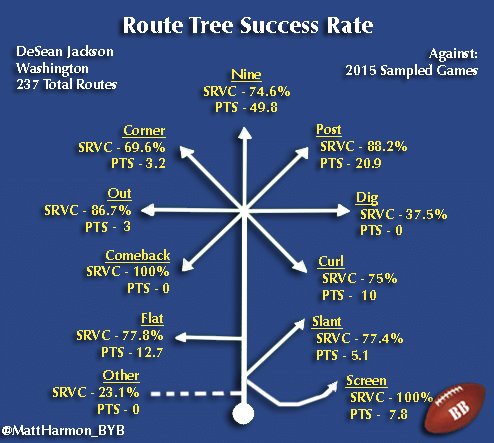